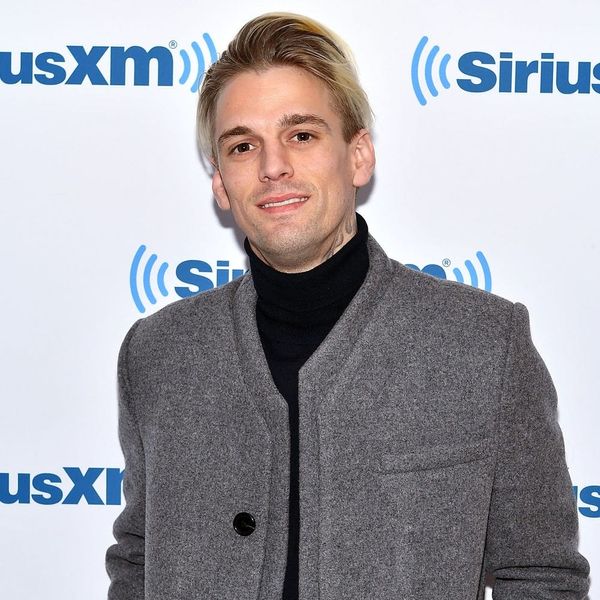 As big brother Nick Carter gears up for his Las Vegas residency (tickets for which are available from March 1), Aaron Carter landed himself in the hospital after what some considered to be a very poor choice of words following his performance in Illinois last night.

According to reports from TMZ, the trouble occurred when a member of Aaron’s opening band, Ill State, interrupted the singer’s set by “goofing around” and grabbing people’s cell phones as he performed. Asking security to remove the individual, (who just so happened to be Mexican), Aaron reportedly said, “Bye, Felipe” as the man was being escorted out. The man was then incited to jump onstage and attack the singer.

Chillen w my boys before I finally get to bed… hospitals suck. & so do bullies. My face is still pretty though and untouched. 🙃 pic.twitter.com/xvqGDFaSEq

Aaron reportedly left the venue bloody and spent the evening in the hospital, where he Tweeted his version of the night’s events.

I didn't get beat up I got a hit and pushed when I wasn't looking and they ran out the club and I stood on the speakers waiting for them? https://t.co/vmeeqdiOEZ

This dude sized me up after I said he had to go and said bye Felipe like bye Felicia the male version.. Friday? He needed to go. https://t.co/80CrFvGtHr

Unfortunately for him, not all of his followers were as sympathetic as he would have liked, believing that the casually tossed about phrase was on par with CoverGirl spokesboy James Charles’s recent Twitter faux-pas, and that the term was actually quite racist.

@aaroncarter no, nothing!? Not gonna own up to your ignorance. Or the fact youll never be your be your brother? Youre not 12 anymore.

Aaron disputed the claims, saying that his use of the term wasn’t racially motivated and quoting Urban Dictionary’s definition. He also defended himself by saying that his band is comprised of a diverse group who practically raised him.

They raised me and have been playing with me doing shows for 16 years. https://t.co/u4JQ5t48mO

Yeesh! Though he has since left the hospital and police reportedly are investigating the incident, it sounds like a rather unfortunate event all around. Hopefully *NSYNC’s upcoming reunion won’t be nearly as catastrophic — we like our boy-band shows drama free, thank you very much!

Do you think Nick’s words were out of line? Let us know over @BritandCo.

Nicole Briese
Nicole is the weekend editor for Brit + Co who loves bringing you all the latest buzz. When she's not busy typing away into the wee hours, you can usually find her canoodling with her fur babies, rooting around in a bookstore, or rocking out at a concert of some sort (Guns N' Roses forever!). Check out all her latest musings and past work at nicolebjean.com.
Controversy
Celebrity News
Controversy Music twitter