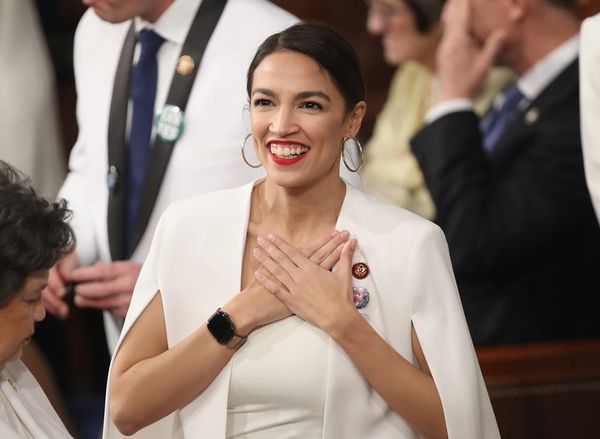 For the cover of their March issue kicking off Women’s History Month,Rolling Stone profiled a few of the women shaping the future of the Democratic party — and maybe the country. The magazine features in-depth interviews with Representatives Jahana Hayes, Alexandria Ocasio-Cortez, Ilhan Omar, and Nancy Pelosi, who opened up about sexism on Capitol Hill, the issues that are most important to them, and the advice they’d give to other women hoping to enact change.

Nancy Pelosi, Alexandria Ocasio-Cortez, Ilhan Omar and Jahana Hayes appear on our #WomenShapingtheFuture cover. We talked to them about how women are changing Congress, Trump, the state of our country and more. Click the link in our bio to read each interview. Photograph by @ZoeyGrossman

Hayes, the first Black woman to represent Connecticut in Congress, said she faces sexism “all the time” in Washington, DC. “Even when we came to new member orientation, my husband was here with me, and everyone was addressing my husband,” she recalled. She had to correct them and identify herself as the member.

That said, she’s hopeful that change is brewing. “We are at an intersection in history, and 20 years from now, it’s going to be the millennials and the students and the women and the single moms and the outliers who came in and restored faith in government,” she said. “It’s happening.”

Indeed, Hayes and her fellow freshman Congresswomen are already shaking things up. Not everyone sees that as a good thing, but Ocasio-Cortez, for one, welcomes the debate. “Frankly, part of change is conflict,” she told Rolling Stone. “And I told this to other members too: If they want to direct their firepower to me, then whatever. I’m in a very blue district. Better me than someone else. For the most part, it doesn’t bother me.” What does bother her, she said, is sexism and bigotry.

“People like to make these disparaging statements, like, ‘Oh, she’s good at Twitter. Is she gonna be an actual legislator?’ I think it’s fine at the outset to be underestimated in that capacity. Where I do tell people to come correct is when they try to paint me as unintelligent, as unsubstantive,” she elaborated. “That’s when you see me fire back. When you call Elizabeth Warren or Kamala Harris ‘unlikable,’ that’s an unsubstantial, unsubstantive, fluff, bullsh*t, misogynistic word to use. Unlikable? What is that? It’s not a policy critique.”

On the subject of policy, each of the women interviewed spoke about changes they hope to push through during their time in office. They also shared advice for other women looking to shake up the status quo. “Never wait for an invitation or ask permission to step into your power,” Omar declared in a behind-the-scenes video from the cover shoot.

Nancy Pelosi, Alexandria Ocasio-Cortez, Ilhan Omar and Jahana Hayes share their advice for young women, what they would say to Trump and their go-to theme song. See more from our #WomenShapingtheFuture cover here: https://t.co/fbcMUMnNxK pic.twitter.com/nGCFLwZhG3

Speaker of the House Pelosi, for her part, offered up this important reminder: “What you bring is very unique. Don’t let anybody try to minimize the importance of what your experience is.”

Kat Armstrong
Kat has been a writer, social media maven and mom for longer than she's willing to admit. She's also spent time in front of and behind the camera, interviewing celebs, politicians and acting as a producer for fashion and artistic photography shoots. When she isn't writing for various orgs and publications, she's hanging with her kids, husband and French Bulldog, Peter, in Toronto, Canada.
Politics
Empowerment
Politics
More From Empowerment