This Is How Alison Brie Got Knockout-Strong for GLOW 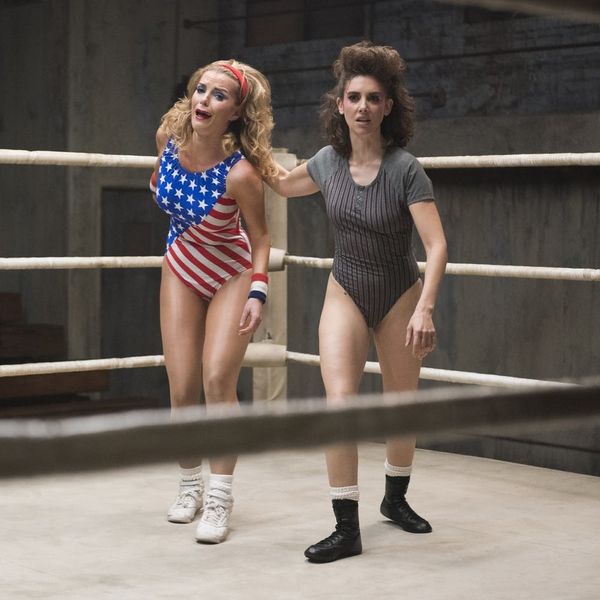 If you haven’t yet watched GLOW, Netflix’s series based on the ’80s professional women’s wrestling circuit, you need to get off the ropes and binge all 10 half-hour episodes. Like now. While the show has plenty of style — think teased hair, spandex, and so much neon — it also has substance. Alison Brie‘s character, Ruth Wilder, a struggling but eager actress, drop kicks, body slams, and throws herself along with the rest of the misfits that form the Gorgeous Ladies of Wrestling into what is one of the most fun, female-empowering shows of the summer.

In order to get into ring-ready shape, Brie and her trainer, Jason Walsh — a Certified Strength and Conditioning Specialist (CSCS) and Certified Personal Trainer (NSCA-CPT) — stepped up her workouts. In addition to Brie, who he has trained for over five years, Walsh also counts Jennifer Aniston, Irina Shayk, and Lily Aldridge as part of his client list. He has his own studio in Los Angeles, Rise Nation, and has worked with both Matt Damon on the new Bourne movies and John Krasinski in 13 Hours. We chatted with Walsh on how he prepped Brie for her role as badass wrestling supervillain “Zoya the Destroyer.”

Brit + Co: How was training Alison for her role in GLOW different from how she regularly trains?

Jason Walsh: Well, the frequency was definitely increased. The typical, run-of-the-mill workout schedule for people with me is 2-3 days a week. We ended up doing 4-5 days a week, depending on the week, depending on how much we were doing, what we were doing. I would regulate that and see how she was doing. And toward the end, right before she started shooting, we added in Rise Nation classes on the second half of the day, so sometimes she was doing two-a-days.

Yeah, it’s insane. It literally paralleled what I would do with someone like a Matt Damon. It’s very similar training.

B+C: How was preparing for this role different from ones you’ve prepared for in the past?

JW: It’s very similar. Luckily for her, she had been working with me for awhile, so I knew that she had a very, very solid foundation. She moves really well, so all we really needed to do was turn the dial up.

She told me what the requirements were and what she wanted to do. The director was like, “Listen, we’ve got stuntwomen who are going to do all the stunts off the ropes.” And Alison being Alison — she’s just a badass, she’s just a total amazing person — she was like, “No, I really want to do all the stunts.” So that being said, my thought was, how do we keep her from getting injured? Just like a professional athlete. Football players, MMA fighters, any of these contact sports — a lot of the training is about keeping these guys resilient and healthy. A lot of that comes to strength training. So we just got her really, really strong. And it really fit her and her role really well. She did every single stunt [in GLOW], except for maybe one, which is amazing. Actors just don’t do that, because it’s too risky.

B+C: Did you focus on any specific moves or body parts?

JW: Think about it — it’s really full-body contact. You don’t necessarily do one body part over the other. We did a lot of heavy strength, full body, multi-joint, multi-angular exercises that required every muscle in the body to work together. The more rigid and the more solid we could get the synergist muscles working with the big movers, to me, that was everything, because I knew that if we got her moving well and strong with those movements that she could probably encounter just about anything in that ring and walk away. You’re going to get bruises and nicks and cuts and things like that, but major injuries are big because you’re gonna shut down production, and that’s the last thing they want to do.

JW: We focused a lot on heavy, heavy sleds. Sled pushing and pulling. And if you take a look at this girl, she’s tiny. She’s not bulky. She looks awesome. She looks like most girls want to look. People that want to “get in shape”… there’s this worry that lifting heavy weights is going to bulk you up, and she’s very much a true testament to training properly and how pushing and pulling heavy weights is not going to bulk you up. She might have actually gotten tinier; she just became much more dense.

So back to your question. Heavy sleds. We did every variation of squats and deadlifts available, both single and double leg. She can do multiple sets of 10-12 pull ups, full body hang. It’s impressive, and it’s so empowering.

...when your trainer stops filming before your 6th pull-up 😳😡🙄 #saymyname @risemovement

B+C: Did you guys have a go-to exercise?

JW: I think she really got into pull-ups and deadlifts. She loved the challenge of deadlifting and getting better at those. We did so many different variations that you never knew what was coming for her, but she really progressed well with the deadlifts.

B+C: What kind of advice do you have for women who are worried that strength training will bulk them up?

JW: There are definitely methods out there that will cause that bulking. High rep weights and higher calories and things like that [create] a great environment for getting stronger and/or putting on lots of muscle. I’m not saying it’s a bad thing; it’s just what you want and what you require. Sometimes in sports, that’s what they want. They want these girls lifting heavy, getting lots of calories in and getting stronger, hitting the ball further, running faster. It can be geared toward that.

But we really messed with a lot of the rep schemes and sets with her to keep it in a range where she benefited from the strength, not necessarily from the cross section of muscles, meaning the thickness or growth of it. So it’s just regulation.

B+C: Did you make any changes/adjustments to nutrition or meals?

JW: We tinkered with it a little bit here and there, but for the most part, she’s a very healthy person that eats well. You don’t want to overload people with too many things. If it became an issue or problem, then I would step in. We just went with it. Her appetite definitely increased, but we capped her at a certain amount of calories per day and just watched it. And it unfolded perfectly.

B+C: What goal in mind did you have when developing her training?

JW: Listen, she had to wear a leotard. Who doesn’t want to look good — you’re on screen. She’s the only girl on the show that didn’t wear the shiny leggings that most of them wore under the leotards, which make you look smoother. And she refused to do it because she didn’t need to. She looked great. She was very confident. There’s also that psychological aspect for women… What angle do I look good at, I don’t really feel comfortable doing this or taking this off or wearing this. She felt so confident, she didn’t have that holding her back from taking her clothes off or wearing a leotard for the whole show. That’s huge. And then you can really focus on your acting. She paid me a huge compliment with that because she was like, “I just feel so confident. I feel so good in my skin.”

B+C: So it’s mental just as much as physical?

JW: One hundred percent. When you feel great, you look great, psychologically, you just feel like you can do anything.

Have you watched GLOW? Share your thoughts with us @BritandCo!