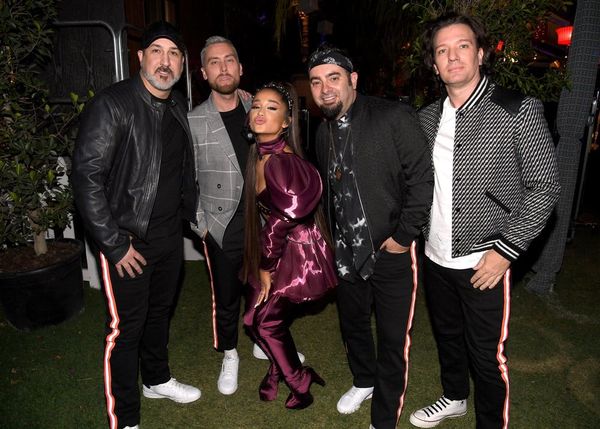 Ariana Grande made history as the youngest Coachella headliner ever when the 2019 festival kicked off this weekend, but her performance was memorable for another major reason, too: The singer brought out members of ’90s boy band NSYNC for an epic performance that’ll have you feeling all kinds of nostalgic.

Grande started her Sunday set with two recent tracks before getting to “Break Up With Your Girlfriend, I’m Bored.” The current hit famously samples the NSYNC song “It Makes Me Ill” from the boy band’s 2000 album, No Strings Attached — so the group joined the pop star on stage to help her perform the track.

“I’ve been waiting all my motherf*cking life to say this! NSYNC!” Grande said as she excitedly introduced Lance Bass, JC Chasez, Joey Fatone, and Chris Kirkpatrick. Noticeably absent was Justin Timberlake, who wrapped up his Man of the Woods tour in Connecticut just one night earlier.

Grande and NSYNC then delivered an unforgettable performance of the 1997 classic “Tearin’ Up My Heart.” Afterward, the band thanked the 25-year-old singer, saying that the appearance had been a “dream” of theirs.

Both Grande and NSYNC had hinted at the cameo in the days and hours leading up to the festival, sharing cryptic Instagram videos and trading tweets back and forth.

The “Thank U, Next” singer also welcomed several other big-name guests for her headlining set, which earned the nickname “Arichella.” Nicki Minaj joined for “Side to Side” and “Bang Bang,” while Diddy and Mase appeared for a throwback performance of “Mo Money Mo Problems,” which also served as a tribute to Grande’s ex-boyfriend Mac Miller, as well as other late hip-hop artists like Tupac, the Notorious B.I.G., and Nipsey Hussle.

RELATED: 8 Things to Watch for at Coachella 2019