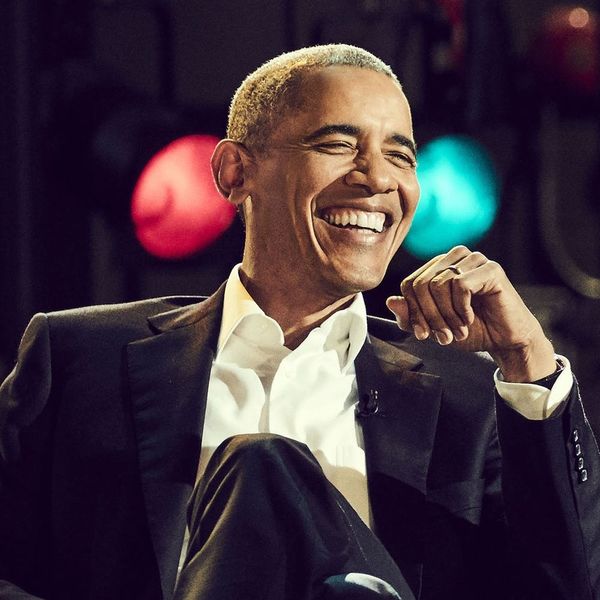 Former President Barack Obama has never shied away from showing us what a loving partner he can be to his wife Michelle — or what an embarrassing dad he can be to daughters Sasha and Malia! In a new interview with David Letterman, Obama even gave a detailed description of just how to pull off the dance moves that always get him mocked by his family.

As seen in a clip from Letterman’s new Netflix talk show My Next Guest Needs No Introduction, Obama recalled a 2015 performance from Prince at the White House that gave him the unexpected opportunity to test out his moves on stage.

“This was probably three or four months before he died, and Prince asks Sasha to come up and dance. And she’s an excellent dancer,” Obama told Letterman. “Then Sasha pulls me up, which surprises me because she always mocks my dancing, but I have dad moves.”

Obama then went on to describe said moves. “The key is what we call ‘staying in the pocket.’ You’ve got to stay in the pocket,” he explained, as Letterman cracked up. “Because I think everybody in here knows dads who get out of the pocket. And they’re trying stuff that they can’t really pull off. And you know, they start doing, like, karate kicks and all kinds of stuff.”

It sounds like Obama has mastered the art of playing it cool — or at least, as cool as possible for a dad.

Letterman’s new show is available on Netflix on January 12, and will also feature sit-down interviews with the likes of Tina Fey, George Clooney, Malala Yousafzai, and more.

Do you know anyone with patented “dad moves”? Let us know @BritandCo!