Watch 20 of the Most Creative Ice Bucket Challenges Yet 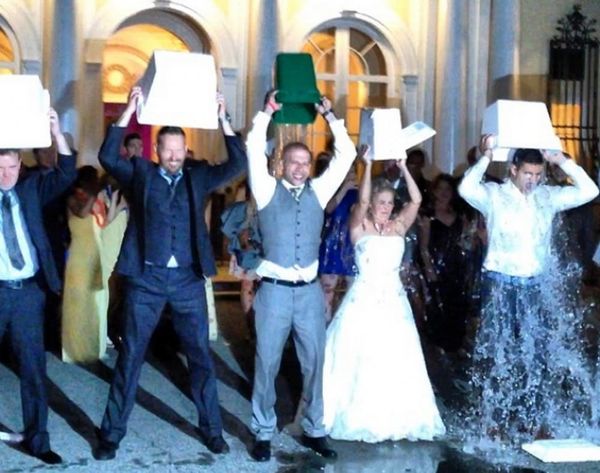 At this point, you’ve probably heard about the Ice Bucket Challenge — maybe you’ve even participated in it and passed the chilly challenge on. From social media to late night, morning and local TV, this random act of coldness has gone very viral. The challenge involves dumping ice water over your head, then nominating someone to do the same. Those who don’t complete the challenge within 24 hours are supposed to donate money to support ALS research. It all started as a way to raise awareness (and money) for ALS, also known as Lou Gehrig’s Disease — and it’s been a huge success so far. Time recently reported that the ALS Association has raised over $5.5 million dollars since July 29th, proof that social media can do seriously amazing things.

2. Wedding: This wedding party incorporated the challenge into their reception. This takes “trash the dress” to a whole new level — and we’re loving it! Ruin your wedding dress for a good cause, not just for the tradition of destroying it. (via @bearfightlive)

3. The Entire Kennedy Family: Maxwell Kennedy nominated his entire family, who stood in a line and gleefully poured colorful buckets of ice water over their heads. The grandkids nominated grandma Ethel who adorably follows suit, but not before she challenges the President, himself. And BTW, President Obama rejected the challenge and opted to donate instead of creating a viral video. (via NY Daily News)

4. Artsy Video: This is what happens when you challenge a creative film maker to the ice bucket challenge.

5. Mark Zuckerberg: New Jersey Governor Chris Christie nominated Facebook CEO Mark Zuckerberg to complete the ice bucket challenge, and he nominated Bill Gates. I bet there are lots of people who’d like to see this one go down. (via Mashable)

6. Ansel Elgort: If you fell in love with TheFault in Our Stars cutie as much as we did, his ice bucket challenge is sure to make you smile — and fall in love all over again.

7. Matt Lauer: If Anchorman taught us anything, it’s that news anchors know how to have fun. Matt Lauer proves it by taking the ice bucket challenge live on Today (and calling out Martha Stewart!).

8. Martha Stewart: Watch as Martha Stewart eloquently accepts her nomination in a perfect room over a perfect sink — no mess here! She also challenged three more domestic goddesses to do the same.

9. LAPD Officer: This honorable police officer formed a line-up of 61 people to individually pour one ice bucket — each representing a fallen officer in 2014.

10. Elizabeth Banks: Stars: They’re just like us! Elizabeth Banks accepts her ice bucket challenge in the shower and nominates two of our favorite funny men: Jesse Tyler Ferguson and Seth Rogen. (via @elizabethbanks)

11. Jesse Tyler Ferguson: One of the funniest and most creative ones we’ve seen thus far belongs to Modern Family star, Jesse Tyler Ferguson. He pours a bucket over his head, but the only thing the bucket’s filled with is his checkbook and a pen. Oh, and he nominates Oprah to follow suit. (via @jessetyler)

12. Lance Bass: *NSYNC’s Lance Bass accepted his challenge on a tree swing, pouring a white bucket over his pretty head, bleached pompadour and all. We kinda wish he sang in this one, though. (via @lancebass)

13. On a Paddle Board: This guy gets super amped up after pouring a large cooler of ice water over his head while balancing on a paddle board.

14. Paul Bissonnette: This Canadian ice hockey player had the most badass idea ever: to stand on a mountain with drop dead gorgeous views, in his underwear, while a helicopter poured gallons of ice water on his head. Then he made this video to go with it. (Warning: do NOT try this one at home!)

17. Silent Movie Challenge: How adorable is this take on the silent movie?

18. Ice + Random Objects: May as well have a little fun with it, right? This guy puts random things on his head before getting a bucket of ice water dumped over him in the bathtub.

19. Construction Worker: What’s crazier than dumping a bucket of ice water on your head? Getting an entire backhoe to dump it!

20. Boston Strong: Watch as 200 Bostonians complete the challenge together in Copley Square. (via @BostonTweet)

Feeling inspired to donate to the cause or spread awareness in a different way? Visit the ALS Association here!

Have you seen a more creative version of the Ice Bucket Challenge? Tweet us your video @BritandCo and leave us a comment below!

Rachel Sumner
Rachel is a Contributing Editor at Brit + Co and the founding editor of lifestyle blog, SADIERAE + CO. While her background is in fashion and styling, she also loves all things creative, cooking, traveling, binge-watching TV shows and giving piggy back rides to her golden retriever, Louie.
Charity
Home News
Charity