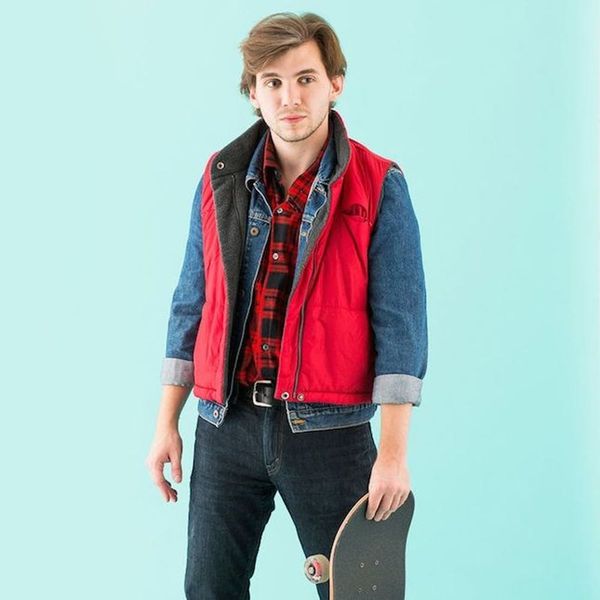 We’ve been giving lots of love to the ladies and kiddos for this year’s Halloween costume prep. But now, it’s *all* about the dudes. These creative DIY costumes will up your Halloween game and leave you feeling super creative. Into video games? Check. Throwbacks? We’ve got you covered. How about pop culture faves? Yup, those are on here too. Scroll on and take your pick from these 41 creative costume ideas for guys that anyone can DIY for Halloween.

1. Al Borland: You know you can’t have Al Borland from Home Improvement without some flannel. Don’t worry if you can’t commit to growing out your beard for this look — just opt for a fake one like Zane did here. (via Brit + Co)

2. Ace Ventura: ALLLRIGHTY THEN. Borrow one of your old man’s Hawaiian shirts, put a belt on your striped pajama pants and run some gel through your hair for this easy, wacky look. And don’t forget to practice your best Pet Detective impressions. (via Gallery Hip)

3. Anger: Got a hot head? Let off some steam as Anger from Disney’s Inside Out. (via Brit + Co)

4. Army Men: Lock and load with your bros as Toy Story‘s very own army men. (via Who Say)

5. Bill Nye the Science Guy: Who doesn’t love this trip down memory lane? Good ol’ Bill has saved one too many of us from boring science classes. Not to mention his show won 18 Emmys during its five-year run. (via Michael/Flickr Creative Commons)

6. Drive: Rev up your night with Ryan Gosling’s Drive jacket. Just cool it on the temper though, okay? (via Pix Dit)

7. Duck Dynasty: Camo-print everything, beards and sunglasses. BAM. (via Minimalisti)

8. Edward Scissorhands: This guy looks pretty badass as one of our favorite Johnny Depp characters. Don’t worry about the blades though — it’s just foil! (via @danielveytia)

9. Emoji Costume: To get this look party-ready, you’ll want to attach the blue construction paper triangles to a headband. (via Brit + Co)

11. Francis Whitman: Francis, the eldest of the three brothers in Wes Anderson’s The Darjeeling Limited, struggles with a tendency to take control. So if you’re the type who orders for your friends or dates, Francis is your best bet. (via Orange Juice Etc.)

12. The Fresh Prince and Carlton: No one’s got moves like you, Carlton. Grab your best man to go as this iconic duo. Be sure to check your local thrift store for those sweaters. (via Imgur)

13. Frida Kahlo: No replications can do Frida’s self portraits justice, but you gotta love this guy’s attempt. Just look at that expert use of tape. (via Fools Do Art)

14. Gameboy and Nintendo: Gamers everywhere, rejoice! These throwbacks to the good ol’ days just require a bit of cardboard and some imagination. (via Flint and Tinder and Wii Noob)

15. Gru: Giant shoulder pads, some eyebrow work and a mini minion is all you’ll need to achieve this costume. (via Imgur)

16. Gustave: If you’ve ever been called out for your charm or culture (or want to be), you’ll fit right in as The Grand Budapest Hotel‘s very own Gustave. (via Brit + Co)

17. Half Man, Half Woman: This optical illusion is bound to get you a few double-takes. (via David Galletly)

18. Inspector Gadget: This one’s for the crafty dudes. You’ll be able to go go gadget as this one-of-a-kind inspector with some random household items. (via Gallery Hip)

19. LEGO Man: Couldn’t get enough of LEGOs when you were a kid? Go as your favorite childhood toy. (via Block Guys)

20. Mad Hatter: We’re all mad here… for the mad hatter, that is. (via Costume Works)

22. Marty McFly: This one’s a no brainer for any ’80s kid. Kudos if you dress as Marty disguised as Clint Eastwood… or Calvin Klein ;) (via Brit + Co)

23. Minecraft: If you’re familiar with the video game Minecraft, you’ll probably know who this guy is and why you should definitely go as him. (via Imgur)

24. Dos Equis Man: “I don’t always dress up for Halloween, but when I do, I dress up as the Most Interesting Man in the World.” (via Uproxx)

25. Not Sure Fry Meme: You’ve probably seen this meme floating around on the Internet, and here it is brought to life. Fry here’s not sure if that guy is in a costume or just doing his job. #NailedIt (via Imgur)

27. Photoshop: If a costume could win the Internet, this would be it. (via Huffington Post)

28. Pop Art: Define that jawline with a cutting-edge face paint job. Don’t forget to pick up some super bright contacts too. (via Imgur)

29. Robert Baratheon: Surrounded by food and wine is how Robert would have looked if he hadn’t died in Game of Thrones. The dead boar is also a nice touch. (If you didn’t know, he was killed by a boar.) (via Nathan Rupert/Flickr Creative Commons)

30. Ron Burgundy: Do you love poetry and scotch and have a dog? Then you have to go as this Anchorman legend (extra points if you call your dog Baxter for the night). (via Brit + Co)

31. Sam: Ever wanted to just run away into the wilderness with the love of your life? Solution: Run away in your own Moonrise Kingdom costume. (via Say Yes)

32. The Son of Man: Here’s an artsy one for you. We’ll leave it up to you to interpret what René Magritte may have meant. (via Chris Carrillo’s Blog)

33. Steve Zissou: Whether it’s loyalty or stupidity, Zissou proves he’s got guts in The Life Aquatic. Harness that energy this year with a blue polo and a red cap, and a whole lotta one-liners. (via Orange Juice Etc.)

34. Tapatío Hot Sauce: Bring the heat with you wherever you go with this hilarious hot sauce costume. Pair it with a burrito for the perfect couple’s costume. (via Reddit)

35. Tetris: Here’s a super fun and DIYable group costume for you and your buddies. Pick up some cardboard and tape to become this epic game IRL. (via Reddit)

36. R.J. MacReady: There’s no knowing who or what The Thing could be. MacReady proves it doesn’t hurt to come prepared. (via @DTJAAAAM)

37. Louis Tully (Vinz Clortho): Ghostbusters fans, listen up. Remember when Louis gets inhabited by the demon Vinz (AKA the Keymaster) and goes around Central Park harrassing people and talking to horses? Yup. This one’s for you. (via Imgur)

38. Xbox Box: If you think about it, you can pretty much be a box for anything. #Genius (via Bianca Consunji/Mashable)

39. Yo Gabba Gabba: Go as DJ Lance Rock and lil’ Brobee to make it a night your little guy will never forget. (via Pix Good)

40. Yukon Cornelious: This fearless prospector from the animated movie Rudolph the Red-Nosed Reindeer proves he’s the one you’ll want to stick with when venturing through the Arctic. (via Reddit)

41. Zero: This bellboy’s pretty much the MVP of the Grand Budapest Hotel characters. Check out how we made this easy look with our tutorial. Pair it with Agatha for an adorable couple’s costume. (via Brit + Co)

Which of these looks will you be rocking? Any awesome ones we missed? Let us know in the comments below!

Grace Lee
Grace is an LA-based freelance writer, documenting her everyday life via her Instagram. She's a fan of spontaneity, individual style, all things Harry Potter, cuddling with her two dogs, and exploring new places. More about Grace can be found on her blog, Girl Meets World.
Halloween
Halloween Costumes
Halloween
More From Halloween Costumes