We Got a First Taste of Beyond Meat’s New Vegan Sausages — and *Spoiler,* They’re Awesome 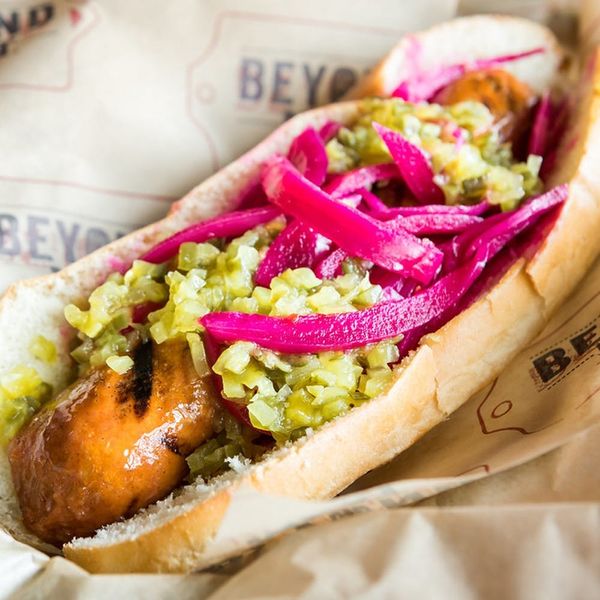 You may have sunk your teeth into Beyond Meat’s The Beyond Burger, a high-protein, plant-based burger that looks, cooks up, and tastes similar to ground beef, so when the brand announced a new Beyond Sausage (the first plant-based version on the market) we had to try it and report back ASAP. According to the press released, the sausage “looks, sizzles, and satisfies like traditional pork sausage” and is not not simply the Beyond Burger smushed inside of a veggie casing. Before we jump into our review, let’s get into all the juicy details.

Beyond Sausage comes in three new flavors: Original Bratwurst, Sweet Italian, and Hot Italian. Despite having no meat, gluten, soy, or GMO ingredients, the sausage gets its pork-like flavor, juiciness, and texture from the protein extracted from peas, fava beans, and rice plus color from beets and juiciness from coconut oil. Weaving those ingredients together using heat and pressure (to mimic the fibers of meat), the ground protein is all wrapped up in a casing “derived from algae” to keep it all vegan. Each link contains 16 grams of protein (two grams more than pork sausage) and 43 percent less fat than your standard pork sausage. Whoa. If you want to know more, refer to the complete nutritional facts to see the full list of ingredients and macros.

Similar to how Ripple Milk has managed to make an actually delicious tasting, high-protein, plant-based milk alternative, Beyond has revolutionized faux meats. Its new sausages are so good, we basically ate all three in their entirety (190 calories times three but who’s counting?!). The casing sizzles on the grill, just like a standard sausage, and imparts a smoky flavor. The semi-gelatinous casing breaks and paves way to the juicy sausage, which shockingly contains different textures like ground pork (chewier, tenser parts with fattier, tender parts). Though we couldn’t pinpoint the flavor of the spices, they tasted nostalgic and familiar to regular pork sausage, almost sweet like caraway seeds. There’s no funny aftertaste or off-putting elements that sometimes enter the territory with vegan meats. Of the three flavors, Original Bratwurst, dressed with mustard and sauerkraut, is our favorite. Hot Italian didn’t have enough capsaicin burn in our opinion, and Sweet Italian lacked spices and sweetness. That said, all of them are tasty and worth trying. We should also note, after consuming all of these sausages, we went to yoga. Amazingly, we experienced no tummy troubles or regrets on the mat. These products are easy to digest and do not cause any heartburn like ordinary sausages might.

Now that we’ve enticed you, where can you actually get these sausages? Currently, they are only available in a handful of restaurants and cities:

Though prices may vary, the Beyond Sausage in a bun with two toppings came out to ~$9 at Rosamunde in San Francisco. Beyond aims to roll the sausages out to its grocery store purveyors soon, so if you’re interested in trying them out at home, let your local grocer know you want Beyond Sausages pronto!

In other news, Beyond’s Recipe and Development team never quits, and the company informed us that they are in the process of fine-tuning and re-releasing its burgers. Keep your eyes peeled for the new reformulated burgers. We know we will.

Have you tried Beyond Sausage? Tell us all about it on Twitter @BritandCo.

(Photos via Beyond Meat)