How a Paralyzed Groom Used Bionics to Walk Down the Aisle 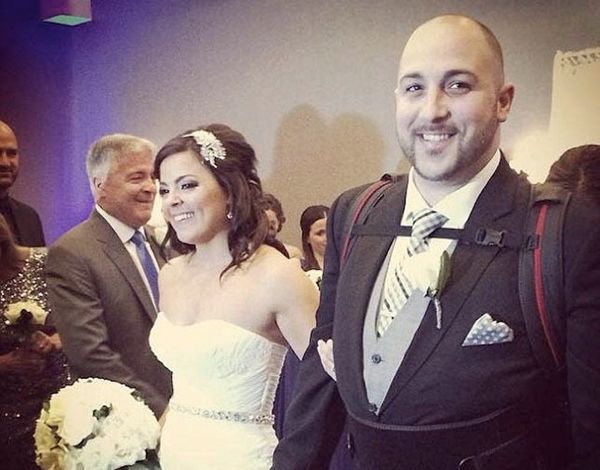 Get ready to brush off that bad case of the Mondays with an inspiring tale that includes tragedy, triumph, robotics and a wedding. Walking down the aisle — it’s a wedding tradition you probably take for granted, right? For 30-year-old Matt Ficarra of Syracuse, NY, it was kind of his dream. Three years ago, Matt became paralyzed after jumping off a boat into shallow water. After proposing to his girlfriend last December, he became determined to find some way to do the wedding walk so he turned to some pretty awesome robot technology to make it happen.

The newlywed used a battery-powered robotic exoskeleton called an Ekso to stand next to his bride on their big day. Ekso is a wearable bionic suit which enables individuals with any amount of lower extremity weakness to stand up and walk with a natural, full weight-bearing gait. The user straps the Ekso to his or her body and controls their legs by shifting their weight, which activates sensors that enable the device to take “steps.” Battery-powered motors in the legs drive them forward.

Ficarra made a seven-hour commute every week to and from the Good Shepherd Rehabilitation Network in Pennsylvania where he practiced using the Ekso. At first he was only able to take a few steps at a time but is now able to walk about a mile. On his wedding day, Ficarra walked with his dad into the hotel ballroom, where the ceremony was held, to a room of applause. Um, yeah count us in to keep the standing ovation going.

This story is definitely making us shed some happy tears, but it also has us wondering: If technology like this exists, why aren’t all folks in need using this to get around? It’s a relatively new technology and is currently only available in a handful of rehab facilities. The company is currently working on an exoskeleton designed for home use that they hope to release in summer 2015.

Ficarra and his family have launched a YouCaring crowdfunding page so that he can use the device once it becomes available. Like most new technology, it’s not cheap; Matt and family need to raise $130,000 to snag an Ekso of his own (psst, did we mention that you can help them?). This price tag certainly isn’t one that most folks can afford, so hopefully as the device’s manufacturing process is fine tuned for mass market, the cost will eventually become more affordable.

How amazing is this story?! Have you clicked across any other uplifting, techy stories we should know about? Share them with us in the comments below.