10 Wearable Concepts That Will Blow Your Mind 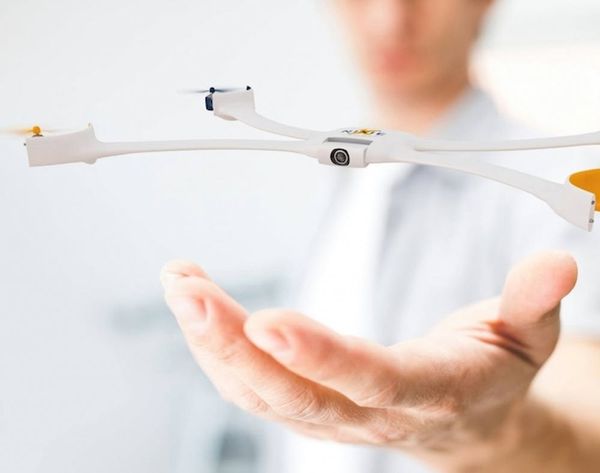 In case you’ve been living under a rock that’s under a bigger rock, you know that wearables is one of our favorite things happening in tech right now. So you can image how excited we are about Intel’s Make It Wearable Challenge, where thousands of creatives show off what they think will be the next big thing in the world o’ wearable tech. 10 final teams of entrepreneurs and developers have been selected to actually develop their products into working prototypes. The grand prize winner (announced in November) will receive $500,000 from Intel to make their dream a reality. Now that the prototypes are ready, we thought you might like to meet the finalists!

1. Babybe: An emotional prosthetic device, Babybe is a bionic mattress to keep mothers and NICU babies connected with touch feedback when they can’t physically be in close contact due to artificial incubation. Inside the incubator, the baby lies on a gel mattress that replicates the experience of laying directly on the mothers chest. The device left with the mother collects her body temperature, her breating, her heartbeat and her voice, which is then transmitted through the gel mattress to the baby.

2. First V1sion: This sports broadcast system actually allows the player’s point of view to be shown, so you can see what Roger Federer sees when he’s ace-ing Nadal or what Aaron Rodgers sees when he’s throwing a long pass.

3. Nixie: This one flies! It’s a camera that you wear on your wrist. On cue, it unfolds and takes flight to capture the perfect shot without interrupting the moment. Think of all the standing-on-the-table brunch shots you will be able to take without actually standing on the table anymore.

4. Vumbl: Beyond a sports and activity monitor, Vumbl is a necklace that stays in tune with body vibrations and then relays the info back to you using touch rather than an app. Then it goes on to get a whole lot more exciting. Since it’s around your neck, it can use your voice to control connected devices. But even more awesome is that it takes entertainment to a whole new level by delivering vibrations and heat to you when you play a video game or watch a movie. Anyone else suddenly feel like watching Jurassic Park?

5. Open Bionics: It’s no surprise that prosthetics are pricey, so these designers created a low-cost robotic hand that hopes to replicate advanced functionality. How did they do it? By using 3D printed materials, of course.

6. Wristify: We needed this over the summer! This band naturally refreshes or warms your body on demand. It uses Intel technology to respond, adapt and learn from the wearer. Basically, it’s like a personal cooling and heating system. And we’re pretty pumped about that. After all, winter is coming…

7. Snowcookie: While we really wish they hadn’t named this Snowcookie (because, why isn’t it a cookie!?), we are kind of excited about the potential to use this wearable on our next ski trip. It monitors your vitals and helps you improve your skiing technique, stay safer on the slopes and connect with other skiers.

8. BabyGuard: Worn on a pregnant belly or as a soft baby hat, this monitors a baby’s health from before birth to three years of age.

9. ProGlove: Made for mass-production factory workers, this glove helps people do their work more efficiently and safely by collecting relevant data in one glove.

10. Blocks: We told you about this customizable platform back in March and are still holding out for it. Blocks allows you to choose different, yes, blocks based on what tech you need to build a custom wearable. Not only do you snap pieces together to create a unique high-tech band that suits you, but you also get to pick which building blocks you want for the software — choose which apps come preloaded and which features you want and don’t, taking out the fuss of dealing with a million features you won’t use.

Which of these wearables do you think should be the next big thing? Let us know below!

Annie D'Souza
Annie is the founding father and editor-in-chief of The Midwestival and a long-time jean-on-jean enthusiast.
intel
Tech
intel Wearable Tech