Blackberry Lavender Honeycomb Cake Is the Dessert Your Summer Needs 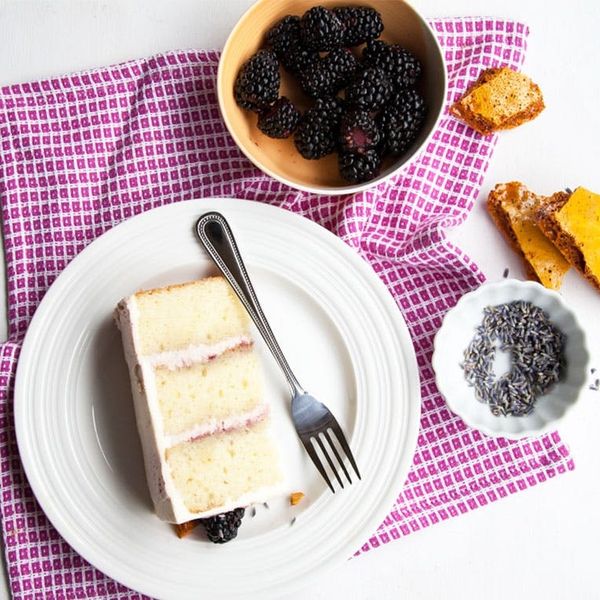 It’s time to flex those creative muscles and make a stunning, unique cake like no other. We’re talking blackberry, lavender and homemade honeycomb for this decadent three-layer masterpiece. Like most art, no design can be completely replicated, nor can you really make a “mistake.” Swirls of different colored buttercream are painted on like watercolors and the hand-broken shards of honeycomb are arranged like a sugar sculpture. You can’t go wrong with this summery flavor combination. So let’s get baking!

How to Make the Cake

Preheat the oven to 350 degrees Fahrenheit. Grease and flour three six-inch cake pans and set aside.

First, make the lavender milk. Place the milk in a saucepan over medium-high heat. Gently bring to a simmer, then add the lavender and turn the heat to low. Continue to simmer for five to eight minutes. Remove from the heat and let cool. Once cool, strain out the lavender buds.

Sift together the dry ingredients and set aside. In the bowl of an electric mixer fitted with the paddle attachment, beat the butter until smooth. Add the sugar and mix on medium for three to five minutes, until the sugar and butter are light and fluffy. With the mixer on medium-low, add in the vanilla and eggs one at a time. Stop the mixer and scrape down the sides and bottom of the bowl. With the mixer on low, add in half of the flour mixture. Mix until just combined, then slowly pour in the milk. Add the remaining flour mixture and mix until smooth.

Evenly divide the batter between the prepared cake pans. Bake for 25 to 30 minutes, or until a toothpick inserted in the center of the cakes comes out clean. Let cool on a wire rack for 10 to 15 minutes before removing the cakes from their pans. Cool completely, then level the tops of the cakes with a long serrated knife.

While the cake is baking, make the honeycomb: Place the honey, sugar and water in a medium saucepan. Heat on high until it turns a medium-dark amber color and reaches 300 degrees Fahrenheit on a candy thermometer. Once the honey mixture reaches 300 degrees, immediately remove it from the heat. Working rather quickly, whisk in baking soda.

How to Make Honeycomb

Pour the contents out on a parchment-lined baking sheet and let cool.

Once completely cooled, break the honeycomb into pieces.

Make the lavender simple syrup. Place the water and sugar in a small saucepan over medium-high heat. Bring to a boil, then reduce heat to low. Add in the lavender and simmer for 8 to 10 minutes, or until the mixture becomes a syrup. Remove from heat to cool, then strain out the lavender buds.

How to Frost the Cake

Generously brush each layer of cake with the lavender syrup. Place the bottom layer of cake on a cake board or serving dish. Spread on 1/2 cup of blackberry buttercream with an offset spatula.

Garnish the top with the honeycomb, fresh blackberries and a sprinkle of lavender.

(Almost) too pretty to eat, right? Let your inner artist go to town and turn any cake into edible art!

Will you be making this cake yourself? If so, we want to see the results! Share photos with the hashtags #britstagram and #iamcreative so we can take a look.