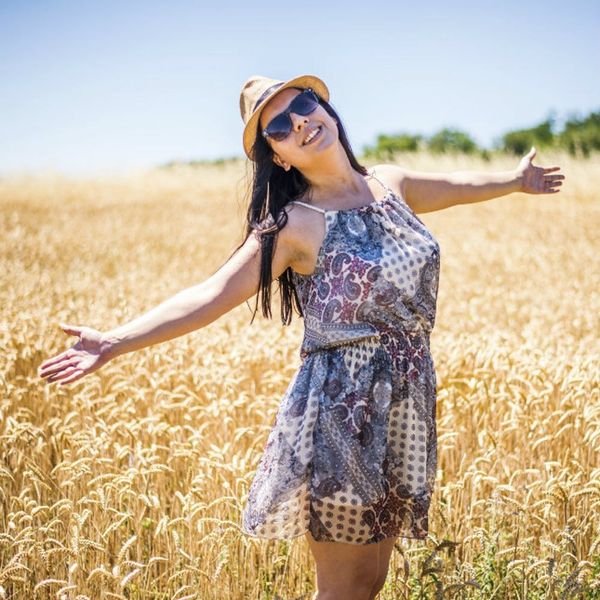 Every morning, each of us wakes up, looks in the mirror, and (unfortunately) assesses, instead of accepts, what we see. We don’t always feel comfortable in our own skin and, in turn, our opinions of ourselves are not always pretty. Everyone wants to treat themselves like a BFF (research says this is one key to becoming more body posi), but that doesn’t necessarily come naturally. A positive body image or acceptance of your shape can be hard to achieve, and even more difficult to talk about. Getting real with more open conversations about the subject (thank you Jessamyn Stanley and Ashley Graham) is an important step for all of us toward improving body image.

To that end, women’s health care company Evofem Biosciences conducted a survey of 1,000 diverse American women in March 2017, seeking detailed insight about the state of body positivity in the US. Evofem CEO Saundra Pelletier, who also serves as founding CEO of WomanCare Global, believes in the significance of polls like this, explaining, “These kinds of studies give insight into the everyday woman — the lady walking down the street, in the office, or at home — which is so important,” she says. “How can we change a culture if we don’t know what the average woman is thinking and feeling?”

HOW WOMEN FEEL ABOUT THEIR BODIES

So, what is the average woman thinking and feeling? Based on the results of the Evofem poll, Pelletier would assess the “general temperature of women’s body image” as “lukewarm.”

Sadly but unsurprisingly, most of the women who participated in the study experience anxiety about their bodies. Thirty-eight percent of respondents noted having a negative relationship with their bodies, 33 percent described their relationship with their bodies as “neutral,” and 29 percent said theirs was positive. But the percentage of women who want to change their bodies is a lot higher than 38 percent. Fifty-five percent of women currently want to lose weight, and 54 percent admitted that they probably care about their physical appearance more than they should (so it’s not just us?).

While these numbers aren’t exactly heartening, Pelletier feels the results should actually give us hope for what’s to come. “When I reflect on the fact that 62 percent of women aren’t immediately tearing themselves down or thinking what they don’t have, I am encouraged,” she says. “Although there is a lot of self loving work to be done, we can get there, and that’s worth celebrating.”

Many of the respondents who have already “gotten there” seem to have found that peace thanks to maturity. In fact, 42 percent of those surveyed said they’d become more confident in their bodies over time. While 66 percent of women between the ages of 25 and 34 said they were overly concerned with their appearance, just 45 percent of women aged 54 and older said the same.

WOMEN HAVE A HEALTHIER BODY PREFERENCE

Based on survey results, women are also turning away from efforts to be “skinny,” preferring instead to be “curvy.” According to Pelletier, this is a “healthier outlook that women’s bodies aren’t meant to be made smaller or lighter — if not already — but tangible, strong, and full. Health and strength are key. When women feel strong, those emotions seep through their cells, and it becomes magnetic to positive experiences.” That’s why we’re behind weight lifting and the #strongnotskinny movement.

HOW TO ENCOURAGE BODY POSITIVITY

Much of the lingering issues with body image can be attributed to unreasonable expectations, often imposed by pop culture. “We need to enforce that women don’t need to chase after standards,” Pelletier says. “The important thing is that they feel healthy and celebrated in the unique, diverse bodies they get to live in.” We need to shift our focus from changing our bodies to accepting and celebrating them.

So, how can we work together to make those statistics look even more promising in upcoming research? According to Pelletier (and the old cliché, kind of), genuine, un-superficial confidence is key.

“Confidence in oneself comes from the inside out,” she says. “A girl may smile at a respectful and genuine compliment on her appearance, but instead of focusing on what she looks like, she should focus on what she can do, her actions, her character. If women and girls can discover what they like about their personalities or skill sets and start from there, that confidence will inevitably flow to the outside.” We can definitely support that!

How do you think we can make our culture more body positive? Tweet us @BritandCo!

From Your Site Articles
Alli Hoff Kosik
Alli Hoff Kosik is a freelance writer who is passionate about reading, running, rainbow sprinkles, her lipstick collection, watching embarrassing reality TV, and drinking pink wine. She lives in Brooklyn with her husband and (in her dreams, at least) three golden retriever puppies. Listen to her talk books on The SSR Podcast.
Body Positive
Health
Body Positive Healthy Living Womens Health
More From Health