2016 Body Positive Moments That Made Us Say Yas Queen 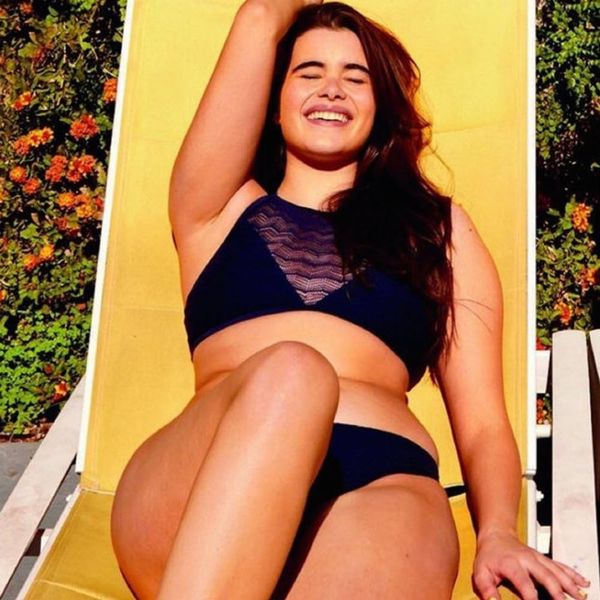 While we spend most of our December looking forward to festive parties and cozy days with the fam, we also like to take a moment to remember all of the amazing things that happened this year (because, let’s be honest, Facebook’s year in review is mega depressing). This year we’re reflecting on all the wonderful body positivity moments that made us scream YAS QUEEN from our office rooftop. From celebrities to hashtags, here are 12 moments in 2016 that celebrated diverse bodies and made us super proud.

1. We learned to celebrate our #MermaidThighs. While having a natural gap between your thighs is cool, there’s no question that the trend-setting thigh gap phenomenon was a little sketchy (so cringy, in fact, that there was even a fake thigh gap jewelry website to help combat it). This year, ladies with slightly thicker thighs celebrated their curves with the hashtag #MermaidThighs on Instagram. And yes, we’re a teensy bit obsessed.

This is a healthy body too.

2. There were SO MANY body positive ads this year. Sure, we’ve seen a scattering of body positive ads in the past, but 2016 was the year body diversity and inclusivity hit it big. From Lane Bryant to Aerie to the There’s No Wrong Way to Be a Woman campaign… maybe our fave brands have finally gotten the message that all figures deserve a spot in the limelight.

3. This fitness blogger’s relatable problem went viral on Facebook. In another groundbreaking moment for body positivity, cool gal fitness blogger Tiffany Brien’s Facebook post about her struggle with bloating went mega viral. Not only did it bring attention to something that millions of women silently struggle with, but her girlboss attitude about the whole thing left us teary eyed and super impressed. (Photo via Tiffany Brien)

So I just pulled into the gym and Anderson is of course dead asleep in the car because he of course refused to nap today.😂 Hence I get to chill and mentally prepare to smash some #BBG #arms when he awakes.😈👊🏼💁🏻 || It's no secret I hate arm day.. (thanks @kayla_itsines for calling me out at the NYC #sweattour2016 😳😬) but ya know what? I DO IT ANYWAY. Because even though I hate training arms, I love seeing progress. When I began BBG my arms and shoulders were by far my weakest, and though I still don't enjoy my arms circuits, at least I can do them! Sure, my progress has been slow and steady but for me this has never been about getting quickly "shredded" or "making gains". (Nothing wrong with that of course!🤗) But my point is I needed a program that fit my busy lifestyle and didn't consume it. I needed something flexible and do-able year round. Something I could stick to that brought maintainable results. That is what BBG is and that is how these baby muscles have been grown. And THAT is what I love. I love the feeling I get at the end of my workout knowing that I DID IT. Little by little, one circuit, one workout at a time. THAT'S HOW WE DO IT. 👊🏼💪🏼 . . . . . #bbgbabes #bbgcommunity #bbggirls #bbgfam #bbgmoms #bbgmums #bbgsisters #bbglife #fitmom #fitness #fitfam #fit #workout #fitspo #fitchick #mysweatlife #sweat #girlswithmuscles #girlgains

4. #Screwthescale was a trending hashtag. Don’t get us wrong — jumping on the scale can be a helpful tool for weight management. But giving up everything you love just to get to your goal weight isn’t quite the best way to get healthier (at least in our opinion). This year, fitness buffs have been encouraging everyday peeps to stop giving so much meaning to a specific number on the scale with a badass trendy hashtag.

I talk about defying yoga stereotypes in a new video for @glamourmag. To watch the full thing, check out Glamour.com (link in bio)! Also, I am taking over the @glamourmag snapchat today- my life is totally unlike the polished & pretty yoga teacher lifestyle, so I'm pretty stoked to show y'all what it's like to practice, teach, and live yoga when you're a curvy fat #qpoc femme in the American South. It's going down at 10am EST- Follow @glamourmag on snap (same name) to catch all the action! (Oh yeah & I'm @mynameisjessamy on 👻) 📸 by @kathrynfriedman Leggings- @mandukayoga Sports Bra- @torridfashion

6. Plus-size yogis became Insta-famous and mega inspirational. One of the most common (and annoying) misconceptions about working out is that you have to be a size two to do it in public. This year, we got the chance to chat with two up and coming plus-size yogis, Jessamyn Stanley and Dana Falsetti, who are motivating millions with their size-inclusive fitness programs.

8. An OITNB star wore a killer swimsuit to New York Fashion Week and slayed the damn game. Known as a fierce advocate for body positivity, Dascha Polanco wore a gorgeous swimsuit at fashion week that made a huge body positive statement (and coincidently inspired our wardrobe must-have for the season). (Photo via Ilya S. Savenok/Getty)

9. Good Housekeeping Beauty Editor Sam Escobar went on a Twitter rant that we loved. After a struggle with bulimia that led them crunching the numbers on the scale every day, Sam Escobar is now candidly open about their weight on their Twitter bio. Detailing the reality of weight in the beauty industry, their inspiring Twitter thread definitely opened up our eyes to the underlying systemic problems we still need to address.

10. Supermodel Victoria Cain told the world how she actually deals with her period during fashion week. Periods. They happen. But most of the time, most women don’t feel comfortable openly talk about them (and the bloat and acne that comes as annoying side effects). Luckily, girlboss supermodel Victoria Cain opened up about the fashion industry’s practices in an interview with The Independent. And yes, it was just as badass as it sounds.

11. We learned the actual psychology behind wanting a “bikini body” and how to deal with the misconception. While the idea of needing a “bikini body” to hit the beach is nothing new, this year we got some actual scientific reasons for why we think we need one to rock a two piece. Fortunately, we were also able to score some mega helpful tips to raise body positive kids to help the next generation get a head start.

And I'm in this picture too! @theashleygraham

Which body positive moment was your fave in 2016? Tweet us by mentioning @BritandCo!

Ashley Macey
Ashley Macey is a lifestyle freelance writer who loves all things fitness, wellness, and creativity. When she's not exploring her home in the Pacific Northwest with her dog Max, you'll probably find her curled up with a good book and some hot tea. Follow her daily jaunts on Twitter.
Body Positive
Home News
Body Positive
More From Home News