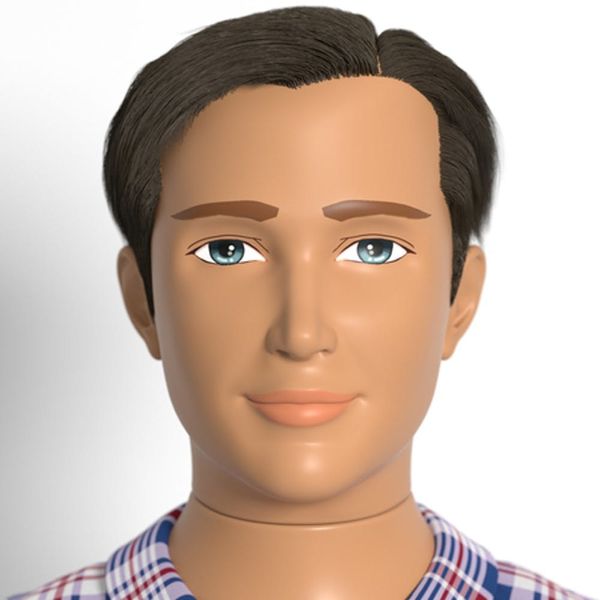 Barbie has been going through some seriously awesome transformations (inclusive Barbie is a TOTAL win) leading up to the iconic doll’s 57th birthday, and now it’s Ken’s turn. Barbie’s favorite fella has gotten the normalizing treatment, thanks to artist Nickolay Lamm who famously gave Barbie a realistic make-over back in 2014. Get ready for proportional, body positive Ken with Boy Lammily.

OMG! We totally know this guy! This new Ken-like character has the proportions of the average modern 19-year-old male, with a stylish outfit of plaid and denim to top off his average-but-awesome look. “Women face relentless beauty standards, and I launched Lammily dolls to show that real is beautiful. Men also feel pressure in the form of not being tall, not having enough hair, or not having enough muscle,” Lamm explained to People. “I think those are things which few talk about because, as a guy, you’re expected not to worry about your appearance.”

The crowd-funding page, which still has 30 days left for you to help them reach their $70,000 goal, project tells us, “He may not have a six-pack abdomen, but he has a fantastic sense of humor. He may not have the roundest biceps, but he has his own trendy style. He may not look like a runway model, but he values himself for who he truly is, and always makes sure to pay the same respect to others!” Check out the whole video introducing the body positive Ken below.

Love! Love! Love! Now, let’s just get some diverse dude dolls in there, and it’ll be over-the-top, 100 percent toy-based awesomeness.

Are you totally into body positive Ken? Tweet us @BritandCo!

Desiree O
Desirée O is a ‘Professional Bohemian’ who loves anything and everything related to the arts, entertainment, and pop culture. She ADORES being a ‘Newsy’ for Brit + Co, covering all of the latest tidbits of awesomeness that you want to read about. When she’s not writing, she’s either making messy art, going on long adventurous walks with her camera, or poking around over at bohemianizm (http://www.bohemianizm.com/). You can find out about Desirée O and her work at http://DesireeO.com/ or follow her on Twitter @DesireeO.
Body Positive
Pop Culture
Body Positive toys
More From Pop Culture