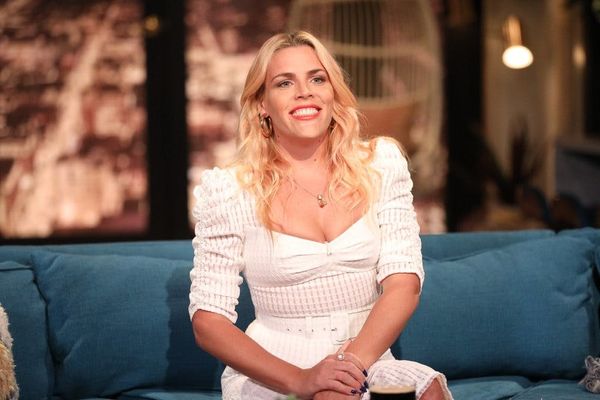 Busy Philipps is one of the most relatable women in Hollywood. Whether she’s owning up to an epic baking fail or revealing a secret from her Dawson’s Creek days with BFF Michelle Williams, Philipps is always candid and frequently hilarious. So you can imagine the fun revelations that came to light when she met up with E! correspondent Dani Fernandez for a round of “21 Questions and Shots.”

The shots, in this case, were tiny cups of Creation Juicery drinks — green tea lattes, oat milk, charcoal lemonade, etc. — which the Busy Tonight host deemed “very LA.” And the questions covered everything from what Philipps’ cats think about her (“She’s no fun!”) to how she’d recap her entire life in 30 seconds (“I’m very busy”).

She also had to consider who she would want to sit next to on an airplane for a 10-hour flight. She chose… no one. (Honestly, same.) “Your girl is in first class in one of those seats that reclines all the way and has a partition that you can put up and then not talk to anyone or see anyone,” she joked. “That’s what I’m doing.”

At another point in the Q&A, she shared a story about the most spontaneous thing she’s ever done: “When I was in high school, in between junior and senior year, my friend Katie called me — I was working at California Pizza Kitchen — and she was like, ‘Do you wanna drive to San Diego tonight and hang out at the beach for two days?’ I was like, ‘Yeah, why don’t we do that?’ I was like 17 years old, and we slept in her Jeep that night. … It was wild.”

Fernandez also asked Philipps if she thinks she’d survive a zombie apocalypse, to which the actress replied, “Oh yeah, 100 percent. I’m just like a f*cking badass, are you kidding me? Like, have we met? Obviously, I would survive.”

Watch the entire “21 Questions and Shots” video for more — including what always makes her smile, which bad habit she’s proud to have broken, and her weirdest food cravings — and catch new episodes of Busy Tonight Monday through Thursday at 11pm.

Desiree O
Desirée O is a ‘Professional Bohemian’ who loves anything and everything related to the arts, entertainment, and pop culture. She ADORES being a ‘Newsy’ for Brit + Co, covering all of the latest tidbits of awesomeness that you want to read about. When she’s not writing, she’s either making messy art, going on long adventurous walks with her camera, or poking around over at bohemianizm (http://www.bohemianizm.com/). You can find out about Desirée O and her work at http://DesireeO.com/ or follow her on Twitter @DesireeO.
TV
Pop Culture
TV
More From Pop Culture