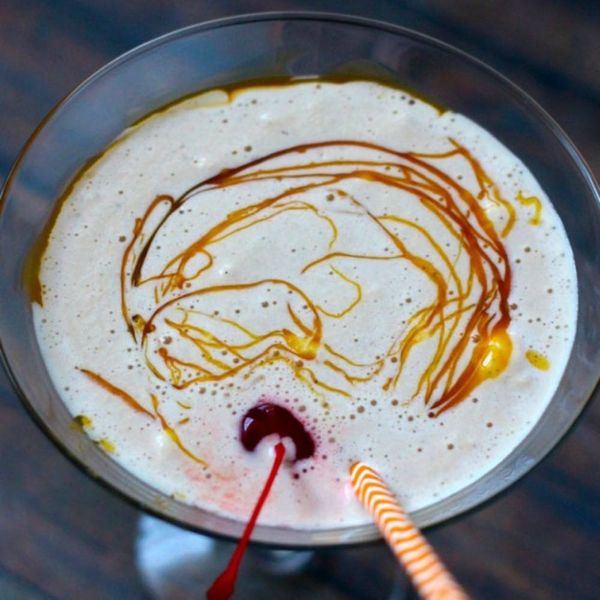 Remember those golden wrapped treats from your childhood? Your taste buds might have changed, but the memories of butterscotch candy remain the same. Well, this nostalgic favorite is all grown up now, turning up in spiked pudding and slow cooker fondues. And the sweet flavor is just as good in drinks. To prove it, we’ve compiled a list of 10 butterscotch cocktails that will instantly transport you back to your 10-year-old self.

We see this sippable all-American pie in your seasonal drinking *real* soon. It’s made with the same spices that coat each apple and — BONUS! — the bourbon brings the heat. (via Just a Little Bit of Bacon )

The butterscotch candies you used to steal out of Grandma’s candy bowl are used as a rim garnish for this cocktail. If that’s not sweet enough, it also has both caramel and butterscotch liquor. (via The OP Life)

Maybe you’ve never tried the actual cake, but from the name alone you know it’s going to be goooooooood. White chocolate liquor, butterscotch schnapps, hazelnut liqueur, and a crisp vodka help create this decadent flavor. (via The Cookie Rookie)

If you grew up drinking milkshakes out of bendy straws in retro diners, you won’t be able to stop sipping this recipe. It’s made with creamy vanilla ice cream just like the good old days, but a splash of Scotch or whiskey makes it age-appropriate. (via Half Baked Harvest)

Coffee drinkers, you are going to LOVE this festive caffeine fix. Four liqueurs and a big dollop of whipped cream give the standard cup of joe a major upgrade. (via Eclectic Recipes)

Mocha Kahlua. Caramel vodka. Homemade salted bourbon butterscotch sauce. Shall we continue with the sprinkle of nutmeg that’s going to send your taste buds into absolute overdrive? (via The Gastronom)

Dreamy hot chocolate and marshmallows collide with sweet butterscotch-flavored whiskey in this recipe. It goes down well when paired with flannel pajamas and chunky blankets, and is perfect for that cabin retreat you’re planning. (via Spicy Southern Kitchen)

We dare you to drink this without feeling like a kid at heart. The maraschino cherry is optional, but highly recommended. (via Sugar, Spice, and Glitter)

Don’t ask us what the “J” stands for, but if we had to guess, we’d say it’s for pure *joy.* A ripe banana makes this cocktail thicker and creamier, just how we like it. (via Mix That Drink)

Get lost in the indulgent flavor of this swirly good recipe that’s simply the perfect end-of-day treat. It’s like dessert in a martini glass! (via Amanda’s Cookin’)
Yasmein James
Yasmein James is a food writer living in New Jersey, but her heart’s on the other end of The Lincoln Tunnel. When she isn’t writing, you can find her eating her way to the most authentic ethnic restaurants in her travels. And writing all about it on her lifestyle blog, She’s Facing Freedom.
Christmas
Cocktails
Christmas Drink Holiday Recipes Recipe Roundup
The Conversation