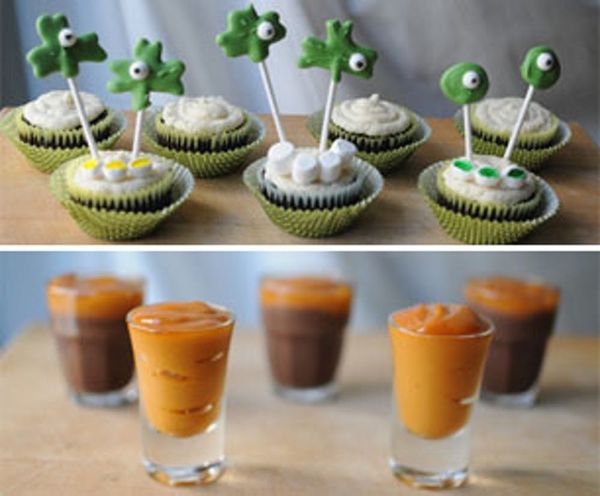 Everyone loves a little Irish booze, especially come St. Patrick’s day. With the ever-popular concoction made up of a shot of Jameson and Bailey’s dropped into a half a Guinness, what’s not to like? Well, one thing's not to like: the way the Bailey's curdles in your Guinness if you can't quite drink quickly enough. That’s where cupcakes come in. Anyone can eat a cupcake fast enough! And we promise it won’t curdle, no matter how long it takes you to eat.

We've seen alcoholic cupcakes recipes here and there that cook all the alcohol out, but where's the fun in that? So, we set out to serve up something truly delightful and truly Irish: a cupcake with a Bailey's chocolate pudding shot in the middle! And, of course, some whiskey buttercream frosting for the top.

Now let’s get to baking. We recommend starting with the Bailey’s chocolate pudding since it takes the longest to set, then make the Guinness Chocolate Cupcakes, and whip up the Jameson Buttercream Frosting while the cupcakes are in the oven.

Whisk all the ingredients together. Put in a serving bowl and chill in the fridge for at least two hours.

Pre-heat oven to 350 degrees. Line cupcake pan with cupcake liners. Mix all of the ingredients in a large bowl. Beat with the electric mixer on low for 1 minute. Pour batter into the cupcake pan, filling it 2/3 of the way. Bake for 18-22 minutes, or until a toothpick can be inserted and come out clean.

Cream all the ingredients together with an electric mixer and set aside.

Now that you have everything made, it’s time to assemble the cupcakes.

Scoop a chunk out of the center of the cupcake to make room for the pudding. I used a frosting tip to this.

With a spoon, drop in some pudding until it is level with the cupcake. Frost the cupcake with a knife or with your frosting tips if you have them. The alcohol in the buttercream frosting makes it separate a bit, but it gives the look of foam on the top of a Guinness, so don’t fret!

You have the basic cupcake, but we think making them into Shamrock monsters might be a little more fun. If you want to add this special touch, get out the following ingredients and tools:

– green food coloring (or a combo of blue and yellow)

Dye the royal icing green and put icing into your frosting tool. Set the lollipop stick on the wax paper and hand draw a shamrock on top of the stick. Once the shamrock completely dries (2+ hours), dab a little royal icing on the back of the googly eyes, and glue them onto the shamrock. Stick 2 shamrocks into the cupcake, use some marshmallows for the mouth, and you got yourself a tipsy St. Paddy’s Day monster!

Once you have finished making your cupcakes, you'll probably notice a little extra Bailey’s pudding that obviously cannot go to waste. Let’s join it with its friend Jameson to make a real treat!

Whisk all the ingredients together. Put in a serving bowl and chill in the fridge for at least two hours.

Get out your shot glasses, and pour some pudding shots! Let’s do some Bailey’s pudding on bottom and a little Jameson pudding on top… and what do we have? That sure looks a lot like a mini Guinness! Man, these three friends are just inseparable on this holiday.

Speaking of friends, we recommend grabbing a bunch of your besties and making a boozy brunch of it this St. Paddy's Day. Just make sure they are 21 and over, ok?

Caitlin Dunn has been craving sweets since the day she was born. She quickly learned to bake but realized that her true passion is all in the decoration. If not in the kitchen, you will find her crafting her latest project of the week. Living in San Francisco has turned her a little 'green' which has changed her creative focus to making one person's trash another person's treasure. She documents the intersection of baking, crafts, tea, and everyday life on her blog teaspoon.

**This post has been updated to remove the "Car Bomb" phrase. In no way did we mean to offend anyone by the original title of the post.

Caitlin Ball
Caitlin is a San Francisco native currently living abroad in Zurich, Switzerland. You will most likely find her in the kitchen, the yoga studio, working on her latest craft project, eating Swiss chocolate, or writing all about it on her blog, teaspoon.
Spike Your Sweets
DIY Recipes
Spike Your Sweets St Patricks Day
The Conversation
Reviews:
More From DIY Recipes

Get Ready to Road Trip With PB & J Snack Bars