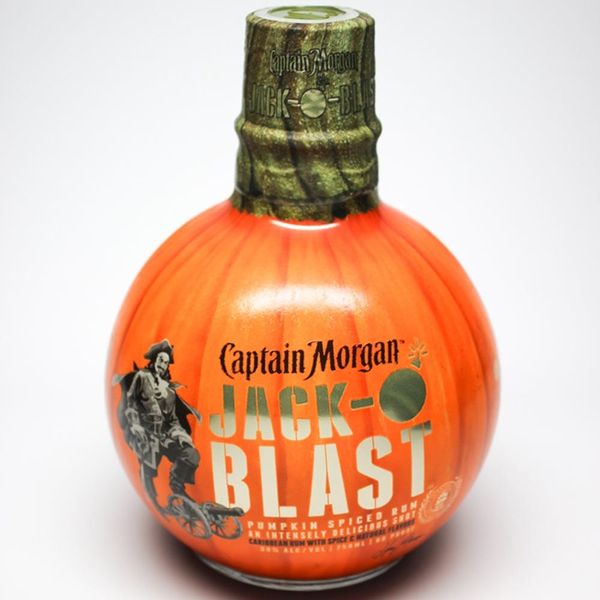 There has been zero shortage of pumpkin spice-flavored products this fall. Given the seasonal flavor’s growing popularity, it should come as no surprise that the collective pumpkin spice obsession didn’t stop at coffee. Thanks to Captain Morgan, it has even entered boozy territory. The spiced rum brand recently reintroduced their extremely festive limited-edition shot: Captain Morgan Jack-O’Blast ($16). For the second year in a row, the blend (available in 750 ml and 50 ml sizes) is on shelves and ready for your Halloween parties.

It’s as if Captain Morgan answered every past and present college kid’s prayers, because not only is Jack-O’Blast way cuter than most bottles, but the flavors are pre-blended to PSL-worthy perfection, meaning all that’s left to do is line ’em up.

Because this particular bottle is meant to be consumed by the shot, its 750 ml (25 ounces) size is actually quite a lot. For reference, a standard shot pour in the U.S. is 1.5 ounces, so the entire thing yields around 16 servings depending on your glass size. The 50 ml size is a single — yet still *very* autumnal — shot.

The rum itself is 60 proof with an ABV of 30 percent, and according to a press release announcing its return, is best served chilled — preferably alongside fall decor.

In a statement obtained by Brit + Co via email, Linda Bethea, vice president of Captain Morgan, spoke to the brand’s decision to bring back the hit blend. “Jack-O’Blast captures the bold and delicious flavors of fall making it an easy decision to release for a second time,” she said. “It’s the perfect addition to any party, tailgate or backyard bonfire this season,” she continued, confirming that it should, indeed, be served at any and all fall festivities.

For those seeking innovative ways to serve a shot of Jack-O’Blast, we suggest making it a double with a shot of Captain Morgan Loconut and a splash of cold brew. Then, top it off with a swirl of whipped cream and a dash of cinnamon like Captain Morgan’s official Pumpkin Spice Shotte recipe, pictured above. It looks like a real-life PSL. Only it’s 100 percent boozy.

Macy Daniela Martin
Macy Daniela Martin is a freelance lifestyle writer based in New York City. When she's not writing about all things weddings at Brit + Co, you can find her trying to up her social media game on Twitter and Instagram. Binge-read even more of her published work here: MacyDaniela.com.
Drink
Cocktails
Drink Food Trends Halloween
The Conversation
Reviews:
More From Cocktails