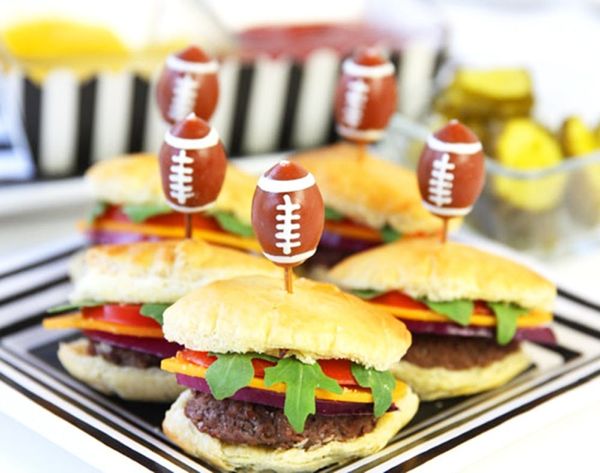 The best season of the year is finally here — football season! Even if you don't have a team to cheer for, there's one thing all humans can agree on: Tailgate food is an absolute touchdown in the grub world. Whether you're a fan of the NFL, college ball or just drinking and eating in parking lots, these recipes loaded with finger foods, sandwiches and plenty of buffalo chicken will have you rooting for game day.

A classic combo, chicken and waffles can be equally enjoyed in a stadium parking lot by skewering it on a stick. Make it spicy by using a Korean fried chicken recipe. (via The Hopeless Housewife)

Prep these guys before the game: Use crescent roll dough to wrap turkey and spicy pepper jack cheese into a no-fuss bite. (via Amanda’s Cookin’)

Here’s a recipe for a morning tailgate. When the game is early, whip up some breakfast potatoes on the grill, then taco them in a tortilla with fresh avocado. (via Serenity in the Storm)

What could get better than this? Sweet potatoes, smokey and crispy bacon and tangy blue cheese all together. Tailgate perfection. (via Cooking for Keeps)

Tailgate food gets a classy touch with this mini pizza recipe! Use puff pastry for a flaky crust and fill the dough with sauce and toppings for a two-bite pizza. (via Full Fork Ahead)

If there’s one food that’s a staple of football season, it’s buffalo chicken. Stuff it inside sweet pancake batter in muffin-size for a perfectly balanced bite. (via Betty Crocker)

The tailgate smorgasbord is robust, so you don’t want to get full on just one dish. Cut this chili dog recipe into bite sized pieces so you can eat your dog and keep going with the rest of the fare, too. (via She Knows)

These fries are so good you’ll want to sneak them into the game with you. Crinkle fries are topped with the South’s finest — pulled pork, BBQ sauce and a homemade pimento cheese sauce. (via Spicy Southern Kitchen)

Told ya buffalo chicken was a tailgate staple, it’s even found its way into these healthy broccoli and cheddar white rice puffs. Be sure to serve them with the delicious avocado dipping sauce. (via Running to the Kitchen)

This one is an instant crowd pleaser. Just make a pie or two of the spicy and cheesy combo and feed the whole team, er, we mean gang. (via The Law Student’s Wife)

Even the sweet stuff can get in on the fun, especially when you transform this cookie dough dip into a sprinke-coated football. Spread it on apples or pretzels to satisfy your sweet tooth before the game. (via Erica’s Sweet Tooth)

Give your standard burgers a spin by putting them between football shaped puff pastry buns. Use cookie cutters to form your burger, cheese and toppings to match. (via Pizzazzerie)

Since you’re tailgating in a parking lot, you won’t have room for bowls of dip. Solve the problem by spooning hot buffalo dip into pastry cups, with a dollop of sour cream and chives on top. (via Blahnik Baker)

Make “potato chip” cups by using a muffin tin to shape strips of thinly sliced fresh potato. After they’ve baked and cooled, fill them with guac, salsa… or whatever your heart desires! (via Yummily Yours)

What’s better than homemade soft pretzels? Pretzels that you can make in a skillet while simultaneously making the beer cheese dip to go with them. (via Host the Toast)

It’s cheesy, it’s “fried” and it’s veggie loaded. Mac and cheese is sandwiched between two slices of zucchini, then breaded and oven “fried” (read: baked) to perfection. (via Half Baked Harvest)

Southern tailgaters will be no stranger to this fan favorite, but even they’ll fall in love with the twist of adding caramelized onions to the sweet cornbread batter. (via On Sugar Mountain)

These pizza triangles, made on herby and thick focaccia bread, can be easily made in the oven or grill depending where you tailgate. (via Just a Taste)

As football season wears on, you’ll grow tired of your standard dog. Call an audible and switch things up with this bacon and onion topped hot dog. (via Creole Contessa)

Here’s your burger game plan: Make a chipotle-spiced patty, smother it in fresh cheddar cheese and top it with sweet corn fritters and guacamole for game time success. (via Half Baked Harvest)

You’ll need all the energy you can get cheering on your team this season. Carb-load with this flavor bursting pretzel bites. (via Life’s Ambrosia)

Save room for dessert! You won’t want to miss out on these chocolate whoopie pies. (via Everyday Occasions)

This is not your average potato chip. It’s baked in chili spices and smothered in cheese. We nominate this chip for the next Heisman! (via Bakeaholics Mama)

We won’t blame you if you miss the first quarter to finish off a basket of these lightly fried and super crispy shrimp. (via The Galley Gourmet)

Whatever your tailgate burger style, sandwich your patty between these spicy buns. Feel free to skip the cheese topping, since buns come fully loaded. (via The Growing Foodie)

Who said all sliders had to have a burger patty between the bun? Use this soft poppy seed bun to sandwich melted cheese, tomato and country ham instead. (via Damn Delicious)

Use storebought pretzels, macadamia oil and a homemade spice blend to make this crunchy, nutty and spicy flavored snack. (via Delicious by Dre)

Made in a foil pouch, you can heat up these pockets filled with French fries, pulled pork and coleslaw on your tailgate’s grill. (via Life’s Ambrosia)

Make these pizza puffs with any toppings you desire — peppers, onions, mushrooms, pepperoni. The point is, it all goes great in these mini-muffin sized bites. (via Lief Currents)

Unlike standard potato skins, these guys aren’t packed with bacon and cheese. Instead, they’re loaded with Mexican flavors, like black beans, green chiles and enchilada sauce. (via Life Currents)

You won’t want to pass the plate once you’ve dug into these bacon-wrapped spuds. (via The Right Recipe)

This onion dip puts all other dips to shame. It’s made with sweet caramelized onions, hoppy beer, cream cheese, sour cream and smokey bacon. (via Confections of a Foodie Bride)

This one is a three-for-one when it comes to bar food favorites. Crispy onion rings, smokey bacon and a spicy Sriracha glaze combine for one mouthwatering bite. (via The Kitchen Whisperer)

These brownies are everything you could want in a tailgate dessert — gooey chocolate bars loaded with sweet caramel, chocolate chips, salty pretzels and toasted pecans. (via The Baker Mama)

Taco meets burgers in these easily transportable sliders. You can chow down on the salsa and tortilla topped patties while you make friends with the tailgate next door. (via Brown Sugar)

No worries on how to get crispy and juicy wings in a parking lot. This recipe calls for making the smothered and spicy wings right on the grill. (via Or Whatever You Do)
From Your Site Articles
Related Articles Around the Web
Allyson Dickman
Allyson is an editor in Washington, DC. A fan of all things food and travel she's always on the hunt for her next adventure, a good bite to eat and the next best thing to truffles. You can find pics of her delicious travels on Instagram at @allyren.
Super Bowl
Appetizers
Super Bowl
The Conversation