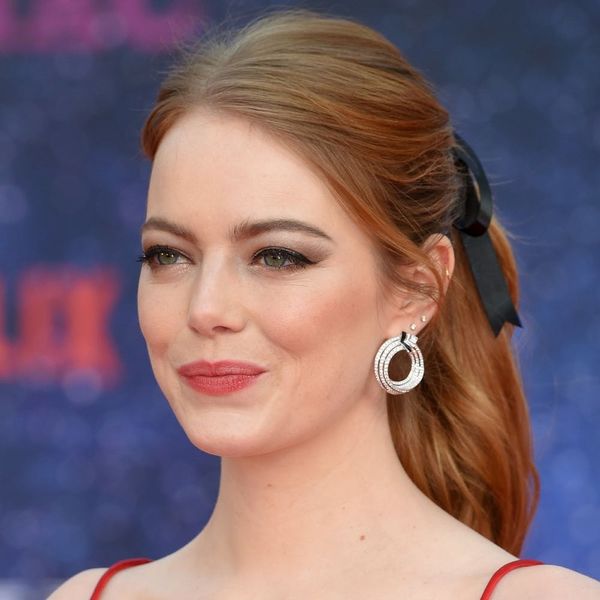 Looking for new ways to tie your hairstyle together? It’s time to take that quite literally and add a little black bow into the mix. What was once considered our go-to hair accessory in elementary school has become a red carpet staple in recent months. With Ashley Graham, Lili Reinhart, Nicole Kidman, and Emma Stone leading the way, we can’t help but want to follow suit. To learn how to add the feminine hair accessory into your beauty routine, keep scrolling for details on the stars’ stunning ‘dos.

The body positivity advocate and model paired a smooth, shiny bun with a handful of little black bows for a 2019 Oscars red carpet hairstyle that was anything but classic. Celebrity hairstylist Justine Marjan began by blowdrying her mane into a center part. She then straightened from Graham’s roots down to her ends, using the ghd Platinum + Stlyer ($249), pulling away from the face and back towards the crown in the process. Next, she brushed from her hairline back to her crown and secured with a clear elastic after applying TRESemmé TRES Two Extra Hold Gel ($5) along the way. She repeated the process for the bottom section of strands and put the full ponytail into a hairnet before twisting into a bun and securing with French pins. For the pièce de résistance, Marjan pinned mini Jennifer Behr black bows throughout and finished with a spritz of TRESemmé TRES Two Unscented Extra Hold Hair Spray ($5). (Photo via Dan MacMedan/ Getty)

The Riverdale actress attended The Art of Elysium’s 11th Annual Black Tie celebration, HEAVEN, donning a little black bow to top off her all-black ensemble. “I felt like we could add a modern element,” says celebrity hairstylist Bridget Brager. “So I purposed a half-up, half-down look with a center part, I kept the lengths straight with a tiny flip.” To score the flyaway-free finish, she applied a dime-size amount of Moroccanoil Treatment ($34) to the mid-lengths and ends, as well as a golf ball-sized dollop of mousse, before drying with a Dyson Supersonic Hair Dryer ($400) and a large round brush. Next, she parted her hair down the middle, secured a half-up ponytail on each side, and a spritzed with Oribe Superfine Hairspray ($38) to lock both into place. As for the bow, that was a last minute addition. Before Reinhart walked out the door, Brager pulled out the ribbon and the whole team applauded, so they incorporated it into the look. (Photo via Axelle/Bauer-Griffin/ Getty)

The Destroyer Best Actress in a Drama Motion Picture nominee walked the 2019 Golden Globes red carpet wearing a black velvet bow in her hair. “It was Nicole’s stylist Julia [von Boehm]’s idea, and I loved it,” celebrity hairstylist Kylee Heath says. “We wanted to have the hair up, but with a detail to tie in the black shoes.” To bring the idea to life, Heath began by blowdrying Kidman’s hair. She then sectioned the front out and pulled the rest into a low ponytail, which she curled and pinned into a low bun. She curled the free-flowing front section as well, though, to make it more ethereal, she brushed it out and applied a touch of the TRESemmé Keratin Smooth Shine Serum ($5) for added shine. Heath completed the look by clipping a Jennifer Behr Black Wide Velvet Bow Barrette ($152) above the bun and finishing with the TRESemmé TRES Two Unscented Extra Hold Hair Spray ($5). (Photo via Frazer Harrison/ Getty)

Who doesn’t love a schoolgirl updo? “A pony is always cool, never too formal, and it absolutely complements any outfit,” celebrity hairstylist Mara Roszak says. “For the London premiere of Maniac, I created this full ponytail with a bit of a soft wave and a bow for Emma.” While the end look is relatively simple, it took quite a few steps to bring it to life. First, Roszak blowdried Stone’s locks in Velcro rollers, using PHYTO Phytovolume Actif Volumizer Spray ($30) at the root. After letting them sit for five minutes, she uncoiled them and curled her hair with a 1.5-inch curling iron for a loose bend. “I teased the hair a bit at the crown for added height (most textured pony tails can use it), then I pulled all the hair back into a mid-height pony tail, securing it with a strong elastic,” she says, noting to make sure that the hair tie is tight enough that it won’t budge. To perfect the pony, Roszak gently loosened a few face-framing tendrils for added softness and used a ribbon from the fabric store to tie it all together. “Before she went out onto the red carpet I sprayed Davines This Is A Shimmering Mist ($22) all over and brushed through the pony gently,” Roszak says. “Then I set it all with Leonor Greyl Voluforme Styling Spray ($36).” (Photo via ANTHONY HARVEY/ Getty)

Which bow hairstyle is your fave? Tell us @BritandCo!

Rebecca Norris
Rebecca Norris is the Beauty Editor at Brit + Co. With a New York apartment that looks more like a Sephora than a home, she's just as quick to roll up her sleeves to swatch all the best bold lipsticks, as she is to hop in a dermatologist's chair to review a vampire facial. After all, anything in the name of a good story, right?
Buns
Hair
Buns Celebrity Hair Hairstyles Mane Attraction Ponytail
More From Hair