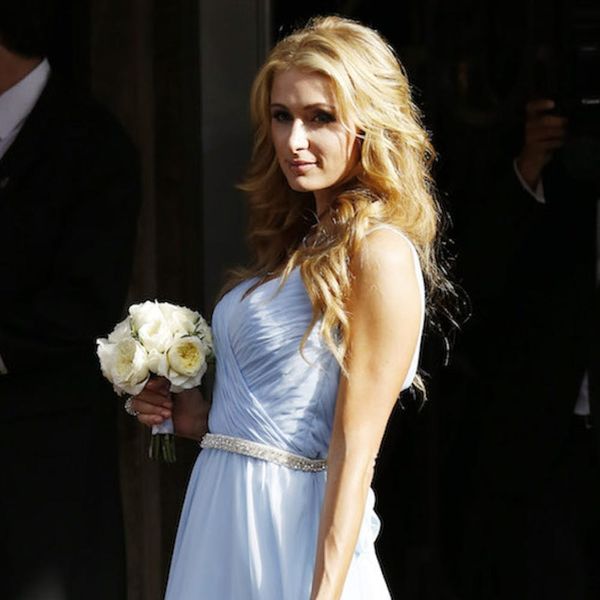 Wedding season is in full swing, and that can only mean only thing — bridesmaid duties! You're not alone, since celebs including the Olsen twins and Rihanna have been a maid to their besties. Scroll through to see how these A-listers and more rocked the role (and their bridesmaid dresses)!
Rachel Bilson: The Nashville actress served as a bridesmaid, not once, but twice, standing up for friend Geraleh just this past March in a stunning blush dress that appeared to be of her own choosing, and donning a one-shoulder frock of the same color back in June of last year for yet another pal. (Photo via @rachelbilson)
Taylor Swift Not only was T. Swift the maid of honor in childhood bestie Britany Maack (now LaManna)’s 2016 wedding, but she made a rousing speech on behalf of the bride, saying, “My favorite accomplishment of my entire life is that everything has changed in my life except for me and Britany… She was my partner in crime at Brownies sleep-away camp, and she was my date to the Grammys.” Awww! (Photo via @taylorswift)
Mary-Kate and Ashley Olsen: The designers showed off their goth side in head-to-toe black for friend Maggie Kayne’s New Zealand nuptials back in March, but went full-on boho for the July nuptials of Golmelsky creative director Cassie Coane. Ashley wore a black, long-sleeved number and Mary-Kate rocked a golden kimono, bright flower crown, and green flats. (Photo via @harleyvnewton)
Jennifer Lawrence: Though J. Law is a bit of a bridesmaid expert at this point, having stood up in no less than four weddings (including her brother, Blaine’s), she reportedly has no desire to ever repeat the task, telling Vanity Fair, “I will never be a bridesmaid again…There needs to be a bridesmaids’ union. It’s horrendous. If anyone ever asks me again, I’m going to say, ‘No. That part of my life is over. I appreciate the ask.’” (Photo via @jlawsfab)
Nina Dobrev: Her first taste of the bridesmaid life for BFF Julianne Hough’s recent wedding to Brooks Laich was every bit as fun as you might imagine. According to Dobrev, who was quite fetching in a pink Marchesa design, “I assumed the dance floor would be fire and it did NOT disappoint,” she wrote on Instagram. “In fact, it exceeded all expectations. It was made of antique glass… Can you guys renew your vows every year? Thanks.” (Photo via @nina)
Vanessa Hudgens: Fans of High School Musical will be pleased to know that Vanessa Hudgens, AKA Gabriella, helped the RL Sharpay, Ashley Tisdale, walk down the aisle in 2014. (Photo via @vanessahudgens)
Kristin Cavallari: The Laguna Beach alum gets bonus points for participation in a pal’s 2015 ceremony while pregnant with daughter Saylor. (Photo via @kristincavallari)
Eva Longoria: After helping friend Alina Peralta say her “I Dos” while looking ravishing herself in a seafoam green Jenny Yoo number, Longoria bucked her heels to roam barefoot in the streets of Spain. (Photo via @evalongoria)
Lena Dunham: Leave it to Lena Dunahm to stand out from the flock, choosing gold loafers with socks to finish off her custom-made J. Crew ensemble for PR consultant Audrey Gelman’s wedding, in a sea of glittery gold sandals. (Photo via @audreygelman)
Rachel McAdams: The Wedding Crashers actress was maid of honor for baby sister Kayleen McAdams’ big day back in 2015, donning a baby blue halter dress with gold Christian Louboutin sandals. (Photo via @PINKPRGroup)
Sofia Vergara: The Modern Family star was all smiles as she posed with the bride for a 2015 wedding, for which she wore a sweet strapless yellow gown. (Photo via @sofiavergara)
Emma Roberts: She might play a mean girl on Scream Queens, but in real life, Roberts is totally there for her friends — can you spot her in this group shot of Karen Elkin’s bridal party? (Photo via @emmaroberts)
Brooklyn Decker: The Grace and Frankie star made sure she’d be remembered at friend Anna K. Dukes’ wedding, tweeting, “So I’ve officially ruined my friend’s wedding pics.” We beg to differ, Brooklyn — that face is wedding gold! (Photo via @BrooklynDecker)
Rihanna: Only bad gal Riri would light one up while undergoing best gal pal duties in a stunning lilac Badgley Mischka gown on a Hawaiian beach. (Photo via @badgalriri)
Jessica Alba: Hubby Cash Warren served as Alba’s date for the evening when she wore this deep blue one-shoulder frock to help a pal tie the knot back in 2010. (Photo via @mydomine)
Paris Hilton:: Though sister Nicky Hilton Rothschild reportedly had seven bridesmaids to speak of, Paris stood out from the bunch in her pale blue Dennis Basso gown. She had no need to worry about garish bridesmaid looks, however: As she was quoted as previously saying by the Daily Mail, "It’s her day, so whatever she wants me to wear, I will. But I know that Nicky has impeccable taste, so the bridesmaid dresses are going to be beautiful.” (Photo via Neil Mockford + Alex Huckle/Getty)
Cara Delevingne: Talk about the chicest bridesmaid ever! Delevingne avoided any bridesmaid style woes by attending big sis Poppy Delevingne’s lavish nuptials in a white Chanel gown that rivaled even the bride’s own custom Chanel-designed frock. (Photo via Stuart C. Wilson/Getty)

Which celeb do you think totally nailed their bridesmaid duties? Share with us @BritandCo.

Which celeb do you think totally nailed their bridesmaid duties? Share with us @BritandCo.

Nicole Briese
Nicole is the weekend editor for Brit + Co who loves bringing you all the latest buzz. When she's not busy typing away into the wee hours, you can usually find her canoodling with her fur babies, rooting around in a bookstore, or rocking out at a concert of some sort (Guns N' Roses forever!). Check out all her latest musings and past work at nicolebjean.com.
Bridesmaids
Wedding Style
Bridesmaids Bridesmaids Dresses Celebrity Style Celebrity Wedding
More From Wedding Style