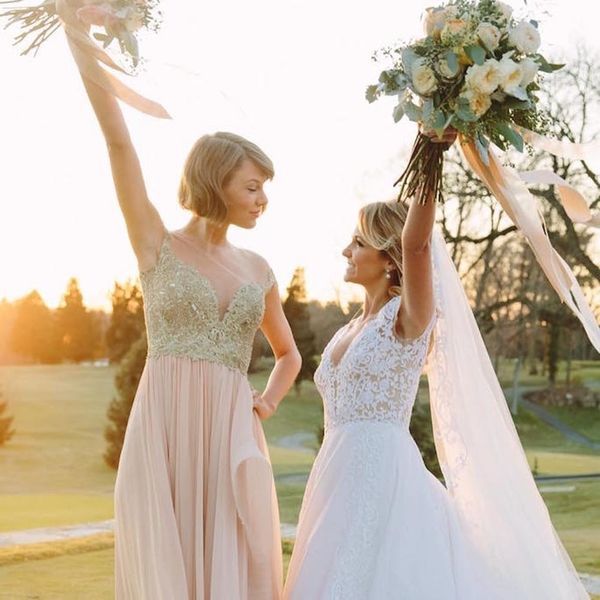 Last weekend, Taylor Swift did the honorable duty of being the maid of honor in her childhood BFF’s wedding. Britany Maack and Benjamin LaManna, pals she’s known since birth (!) and kindergarten (also !), respectively, tied the knot in Pennsylvania, and Tay embraced the special day with her OG squad as wholeheartedly as we would expect her to, calling herself the “happiest maid of honor ever.” To date, we’ve only had a few of Taylor’s Instagrams to peep of the perfectly pastel proceedings, but now — now there’s a video. And yes, while this is the bride and groom’s day, we’re all obviously here to see T-Swift in action. You are not ready for this.

Of COURSE Taylor gets on stage to sing with the band. Of COURSE she busts out some signature adorkable dance moves. She’s so obviously stoked and happy to be at her besties’ wedding. And her Maid of Honor speech? Well, the whole thing isn’t in the video, but the parts that are are sweet, personal and pretty much a perfect tribute to a life spent with this woman as one of her closest friends.

“My favorite accomplishment of my entire life is that everything in my life has changed except for me and Britany,” Taylor says of Britany in the video. “She was my partner in crime at Brownies sleep-away camp, and she was my date to the Grammys.” Um. Yeah. Cry.

Taylor also of course talks about the husband and wife’s love story. Having known them so long, her insight goes way back. “He would chase her and pursue her through middle school and junior high and high school, and their paths would diverge, and then come back together, and it would be so magically unpredictable but at the same time, so incredibly fated, just like the best love stories are.” Yep, pretty perfectly Taylor.

Have you ever been a Maid of Honor? Let us know on Twitter at @BritandCo!