12 Celebrities With the MOST Creative Pet Names 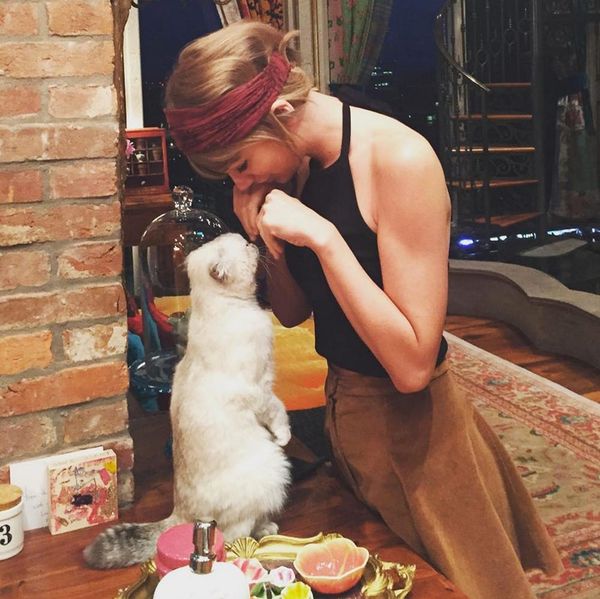 Alright, so it’s no secret that we’re a little baby name obsessed over here at Brit + Co. But we’ll let you in on a little secret: We’re even more obsessed with pet names. No, not the kind your boyfriend gives you that makes everyone else want to vomit. The kind that you give actual pets. Why? Because if you want to name your dog Matzo Ball, you can. And hey, Adam Sandler actually did. But he’s not the only one to get creative in this department. Scroll on down to see what other celebs have named their furry friends.

Taylor Swift: If you follow Taylor Swift on social media, chances are you’re already acquainted with her cats Olivia and Meredith. Olivia was named after Meredith Grey (the main character on Grey’s Anatomy). Olivia is named after Law and Order: SVU detective Olivia Benson.

John Legend: While John Legend and Chrissy Teigen are now expecting their first daughter super soon, they already have a son – he’s just not human. Their pup Puddy recently celebrated his eighth birthday, but we say he doesn’t look a day over seven and a half.

Rihanna went to the club and found a dog in the bathroom and took it home LMAOOO pic.twitter.com/rxqQ9sulu0

Rihanna: Rihanna and her pup Pepe didn’t have the most normal of meet-cutes. She was clubbing in LA when she randomly found this pup in a bathroom. Naturally, the pop star picked him up and brought him home.

Eva Longoria: Say hello to Eva’s little pup Jinxy. Eva snapped this pic just last week in honor of Jinxy’s birthday. He doesn’t appear to be too stoked about the whole aging thing…

I am so proud to announce that @missasiakinney is the face and star of COACH this season! Shot by Steven Meisel for the "Coach Pups" Campaign!

Lady Gaga: If you thought Lady Gaga’s pup Asia was any less fabulous than she is, think again. Not only does she have her own Instagram account (with 227K followers), she also scored an ad campaign with Coach.

Matthew Lewis: Neville Longbottom may have had a tough time at Hogwarts, but taking care of magical creatures was always his forté. And now it looks like all the acting may have payed off, as he and his pup Baxter appear to be two peas in a pod.

i love when my mom @iiswhoiis buys new pillows and blankets that i lay all over and get them so furry that no one can ever use them again except ME. ❤🐱👍👏

Kesha: TBH it’s kind of insane that Kesha and Taylor Swift aren’t roommates by now, considering they’re both totally cat-obsessed. This is Mr. Peeps, a Siamese cat Kesha adopted back in 2012 who’s so fabulous he even has his own Instagram account.

Adam Sandler: When naming his English bulldog, Adam decided to pay tribute to his Jewish heritage by naming his pup after the classic Jewish dish — Matzo Ball!

Nikki Reed: Perhaps the ultimate celebrity animal lover, Nikki Reed posts a photo of her and some sort of cuddly creature almost every day — but she only has one pup that’s officially hers. That lucky spot goes to Enzo the seven-year-old German shepherd.

Ed Sheeran: I mean, if you’re going to be BFFs with Taylor Swift you kind of need to be a cat lover, right? Ed met his current kitty as he was about to be put down. He rescued him, named him Graham and now they’re best buds.

Rita Ora: Taylor Swift and Adam Sandler were both pretty creative with their animals’ names, but we have to admit, Rita Ora might be the winner of this unofficial naming contest. Her little fluffy pup goes by the name Cher.

Miley Cyrus: As an avid animal rights activist on Instagram, it makes total sense that she has some creatures around the house. Sadly, Miley lost her puppy last year, but thankfully her cat Harlem is still around for some late night cuddles.