10 Celebrity Hairstyles That Prove Ponytails Are Perfect for Spring 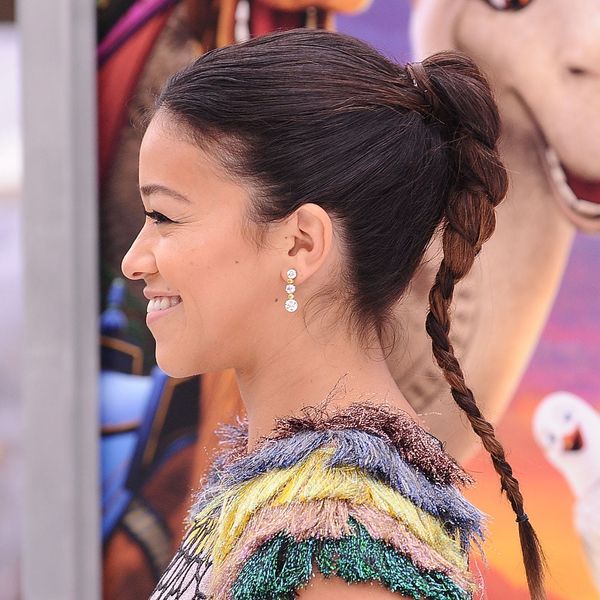 Never want to have a bad hair day in your life? Ponytails are the quintessential backup hairstyles that will *always* take your hair from "oh, no" to "oh, yes!" Whether you have super long locks or an updated lob, here are some of the best ponytail styles to copy from your favorite celebs.
Lucy Hale: Sleek in the front, party in the back. This down-the-middle braid-turned-pony is bold and beautiful for every hair type. (Photo via Todd Williamson/dcp/Getty)
Ariana Grande: Add a few mini braids to a classic ponytail to create dimension and structure. (Photo via Steve Granitz/WireImage/Getty)
Selena Gomez: Part your bangs down the middle to achieve Gomez's teased low pony look. (Photo via David Livingston/Getty)
Chrissy Teigen: The more gel, the better when it comes to Chrissy Teigen's simple pulled-back 'do. (Photo via Kevin Winter/Getty)
Zendaya: Feel like a princess with a half-up ponytail that's voluminous and curly AF. (Photo via Rob Kim/WireImage/Getty)
Gina Rodriguez: This braided pony is whimsical and fun with just the right amount of texture. (Photo via Jason LaVeris/FilmMagic/Getty)
Lea Michele: Classic and chic, Michele's style is ideal to take from the boardroom to happy hour. (Photo via Steve Granitz/WireImage/Getty)
Issa Rae: Bring back the side pony with a sleek side-braid and a whole lotta volume. (Photo via Alberto E. Rodriguez/Getty)
Yara Shahidi: This hairdo will make you see braids for daaays. (Photo via Todd Williamson/dcp/Getty)
Kerry Washinton: Let your strands drape to the side with a high pony that's classic enough for the red carpet. (Photo via JB Lacroix/ WireImage/Getty)

Raven Ishak
Raven is a Florida native who recently moved to New York City to pursue her dreams. You will always find her taking an unhealthy amount of photos for her Instagram, obsessively tracking the latest coffee shops and restaurants, and watching movies with her boyfriend.
Celebrity Hair
Hair
Celebrity Hair Hair Trends Spring Style Spring Trends updo
More From Hair