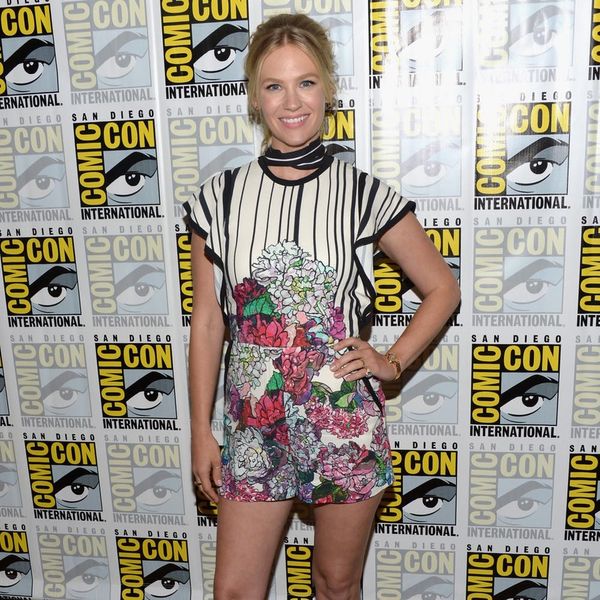 Fashion at Comic Con? It’s not just about capes, spandex and colorful wigs, you know. Of course, the most eye-catching fashion statements at Comic-Con will always be the amazing costumes hand-sewn by all of the fans — we especially noticed a lot of Harley Quinn and Wonder Woman cosplays — but there were also plenty of our favorite celebs at Comic Con this year, and they seized the moment to show off some killer fashion sense.

1. Cara Delevingne: Cara Delevingne killed it with this color-blocked ensemble. We’re totally digging her high-waisted pants paired with a cropped t-neck. Swap the heels for a pair of clean sneakers, and you can easily imagine Cara strolling through the park sporting this clean, easygoing outfit. (Photo via Kevin Winter/Getty)

2. Karen Fukuhara: Karen Fukuhara is set to star as the super villain Katana alongside Cara Delevingne in the much-anticipated Suicide Squad. She appeared at a roundtable alongside her other co-stars wearing a super minimal crop top and a pair of flared, high-waisted pants. Toss on a blazer to turn this into a look that gets down to business. (Photo via Kevin Winter/Getty)

3. Cate Blanchett: Even at Comic-Con, Cate Blanchett looks like the definition of elegance, as seen in this pic of her from a screening of The Hobbit. We love that she kept her outfit simple and cohesive by coordinating her black heels with the black stripe in the middle of her pink dress. (Photo by Frazer Harrison/Getty)

4. Rachel McAdams: Rachel McAdams stopped by Comic-Con to promote her new film, Doctor Strange. She stood out by rocking an edgy mesh dress that could have come straight off an Alexander Wang runway. Note the subtle hunter green and black color-block details and the ruffled hem — this dress basically checks all the boxes. (Photo via Alberto E. Rodriguez/Getty Images for Disney)

5. Karen Gillan: We were in love with the Dr. Who actress’s tomboyish, Annie Hall-inspired look. Karen rocked a neat variation of the jumpsuit trend in a pair of designer overalls with a crisp, short-sleeved dressy shirt. (Photo via Kevin Winter/Getty)

6. Zendaya: One of the more dressed-up gals in attendance this year, Zendaya rocked this elegant gray dress to promote Spiderman: Homecoming. The toggles that pull together this structured 3D-embellished dress are genius. We can’t help but swoon over this look and its perfect mix of playful and classic. (Photo via Alberto E. Rodriguez/Getty Images for Disney)

7. Lupita Nyong’o: Lupita looked mesmerizing — as always — at this year’s Comic-Con. She can wear a totally rad dress with all kinds of gorgeous earth tones and rich, intricate patterns and make it look super casual, and her ability to pull off just about any hairstyle is what makes her such a style star. (Photo via Alberto E. Rodriguez/Getty Images for Disney)

8. Brie Larson: Brie Larson looked like a fabulous ’70s-era jetsetter in this minimalist emerald green jumpsuit. Our favorite part is the exaggerated pant legs that hide her heels and give the illusion of height. (Photo via Alberto E. Rodriguez/Getty Images for Disney)

9. Laura Harrier: Laura Harrier appeared alongside co-star Zendaya to promote Spiderman: Homecoming in a crisp, buttoned-up shirt and creased pants. She topped off her HR-approved look with a pair of fuzzy, messily tied heels to add a bit of a quirky edge. (Photo via Alberto E. Rodriguez/Getty Images for Disney)

10. Abigail Spencer: Abigail kept her outfit super clean, but classic and cute nonetheless. The white crop-top and black high-waisted pants were clearly a go-to combo for the celeb set. We especially love the over-the-top ribbon detail at the waistline.

11. January Jones: Betty Draper would definitely not approve of this multi-print stunner January sported. She’s known for taking chances in the style department, and with this floral and stripes combo romper, it certainly paid off. (Photo via Dave Mangels/ Getty)

Want to see my LEGO dress up close? Come to the @entertainmentweekly Con-X stage TODAY at 4:30 at the Embarcadero where @nathansawaya @andrewmaclaine and I will be doing an interview about this dress! Plus I will be signing Ahsoka autographs afterwards! Hope to see you there! #sdcc (📸 by @kelseyedwardsphoto )

12. Ashley Eckstein: Ashley looked out of this world this weekend with a dress made entirely out of legos! Built with 10,000 of the plastic pieces, the floor-length gown features a graphic print of her character, Ashoka Tano, from the Star Wars: Clone Wars cartoon series. May the force be with you, Ashley!