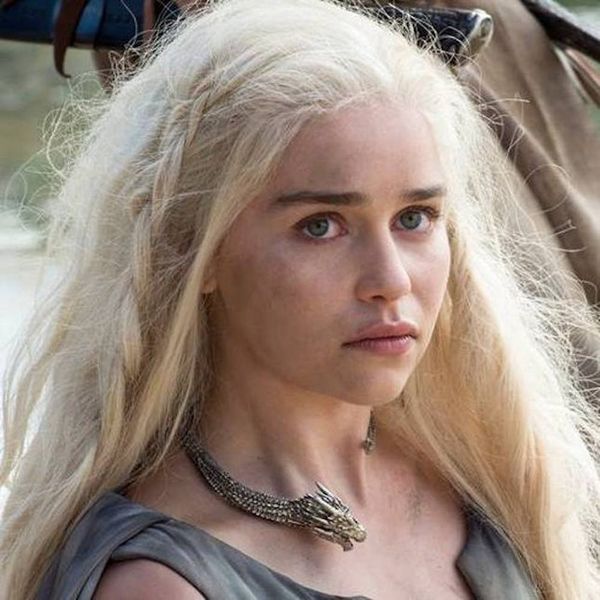 Game of Thrones has some fantastic hair, from Jon Snow’s dreamy ringlets to Sansa Stark’s elaborate updos to — yes, even Cersei’s shorn head. No one can top Daenerys Targaryen’s famous silvery tresses, however, and what makes them even cooler is that there’s a hidden meaning behind the way she wears them.

Back in season one of GoT, Daenerys was looking at her new husband Khal Drogo’s braid when her brother Viserys explained to her that the Dothraki use hair as a symbol of power; you get a braid for achieving a victory.

And if you have a long braid, it means you have not been defeated in battle, because if you are defeated you have to cut your braid so the world may see your shame. Dany has triumphed a good amount over the course of the show, which means with each passing season, her ‘do has gained several MORE braids. For example, she gained one after overthrowing the slavers in Slaver’s Bay and another after her army slaughtered the Lannisters’.

The experiment continues. My IQ has stayed around average and my need to be near fire breathing creatures and uncomfortable seats made of iron has trebled. #hereslookingatyoukid #canyoutellthiswasshotonaniphone? #apparentlyblondestakemoreselfies 💃

However, Emilia Clarke’s new hairdo has some people convinced that the Khaleesi will be chopping off her locks after the death of one of her dragons, as such a loss would count as a tremendous defeat. Unfortunately, we’ll have to wait a while before we know for sure.

Do you think Daenerys will lose her braids next season? Tell us @BritandCo!

Shea Lignitz
Shea can be found in the nearest bookstore or brewery, exploring the great outdoors, or blasting Led Zeppelin. She grew up in the cold and rain of Northern California's redwoods but is currently wandering around Texas.
Braids
Hair
Braids Celebrity Hair Game of Thrones Hair Hairstyles