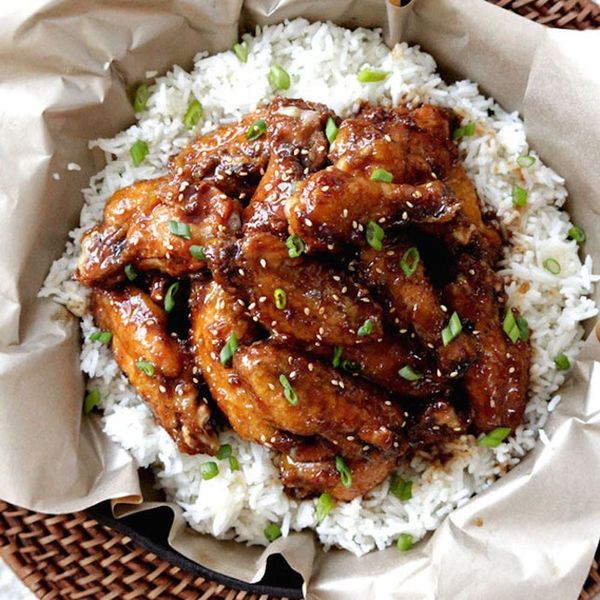 When it comes to planning your dinner for the week, chicken is typically the first choice. You always go for the breast or thigh, but what about chicken wings? Sure, they’re mostly known for being a Super Bowl appetizer, but they can easily be transformed into a fun weeknight dinner. Take baked Korean chicken wings, for example. When you serve them with rice, kimchi and a spicy gochujang sauce, they instantly take you out of your dinner rut. Keep reading for 16 more versatile recipes to spice up your dinners.

Ahh, the classic. Even those with an aversion to spicy foods can appreciate the subtle kick of buffalo wings. Serve with bleu cheese dressing and celery to combat the heat in the most delicious way. (via Bon Appetit)

If the traditional variety are a little too conventional for you, try these finger-lickin’ honey hot wings. They’re sticky, sweet AND spicy. And totally perfect for an impromptu late-night dinner. (via Carlsbad Cravings)

These wings are full of flavor from cilantro, parsley, garlic and jalapeño. Serve with grilled corn and a big salad to make a complete Argentinian-inspired meal. (via Tastemade)

No matter the heat level you prefer, you can adapt this dish to fit it. Blend together peach preserves, chipotle peppers, honey and vinegar, and in just 25 minutes you’ll have crispy wings that the whole family will love. (via Whisk It Real Gud)

Dry brining the meat will allow them to soak up all the flavors from the salt, pepper, garlic and paprika. Toss with lime, cilantro and melted butter, then serve with rice for dinner or alongside chips and guac for an appetizer. (via Cooking Maniac)

Let the flavor of these crispy chicken wings shine with nothing but a generous sprinkling of salt and coarse cracked pepper. If you’re serving at a party, plate them with various sauces so everyone gets what they want. (via Jo Cooks)

The key to crunchy baked wings that seem like they’re fried is none other than a coating of baking powder. Once they’re perfectly crisp, toss with a sticky ginger-lemongrass sauce and top with green onions. (via Nicky’s Kitchen Sanctuary)

If you prefer a wing that’s sauceless and not spicy, this lemon pepper chicken version is *perfect* for you. They may be baked with a dry rub, but the inside is unbelievably juicy and tender. (via The Wicked Noodle)

Kids and adults will both flip for this kind. Pair with loaded potato skins to treat your family to an exciting wing night at home. (via Let the Baking Begin)

Instead of ordering takeout for the 10th time this month, make these General Tso’s wings to ease your craving. On the side, whip up a quick veggie lo mein or sticky rice and broccoli. (Carlsbad Cravings)

These wings are SO crispy, you won’t believe they’re baked and not fried. Their base is simple, so feel free to pair them with any sauce you like. (via Cooking Maniac)

If it’s spice you want, it’s spice you’ll get. Mix the habanero with sweet peach and mango to balance the heat and you’ll have an addicting wing that’ll disappear in seconds. (via Flavor Mosaic)

Any wing recipe that has eight spices, including cloves, is bound to have a flavor explosion. Once you try these mango jerk wings, you’ll be hard-pressed to find one you like more. (via Grandbaby Cakes)

Experiment with the flavors of Peru on these ultra-savory chicken wings. Whatever you do, DON’T skimp on that green sauce, though. (via Eat the Love)

The only thing better than chicken wings is chicken wings you can make in the slow cooker. These are so sweet and moist that they’ll practically fall off the bone with your first bite. (via Noble Pig)

One zesty Thai sauce serves as the glaze and dipping sauce for these syrupy wings. Finish with a squeeze of lime just before serving to knock everyone’s socks off. (via Cafe Delites)
Paige Johnson
Paige is a blogger, food writer and culinary master from Louisville, Ky. She's a newlywed who's obsessed with dogs and renovating her 117 year old home. When she's not working on her blog — My Modern Cookery — you can find her binge watching F.R.I.E.N.D.S with a triple shot latte in-hand.
Dinner Party
Recipes
Dinner Party Dinner Recipes Super Bowl
The Conversation
Reviews:
More From Recipes