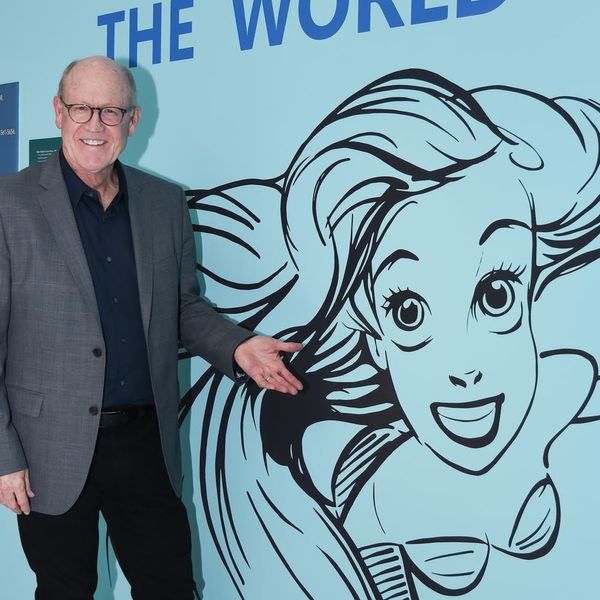 You might not know the name Glen Keane, but you for sure know his work. The Disney Legend is responsible for creating uber-iconic characters such as Pocahontas, Tarzan, Aladdin, the Beast, Rapunzel, and everyone’s favorite little mermaid, Ariel. Keane also worked on Pete’s Dragon, The Great Mouse Detective, The Fox and the Hound, The Rescuers, and The Rescuers Down Under during his 30+ years at Disney Animation Studios.

Even after leaving Disney, Keane shows no signs of slowing down. Keane partnered with Google on the Tilt Brush (a new VR drawing tool); he’s directing a Netflix/ Chinese animated film titled Over the Moon; he JUST won an Academy Award alongside Kobe Bryant for his short Dear Basketball, and the Walt Disney Family Museum has debuted an exhibition of his work. Make Believe: The World of Glen Keane showcases examples of his hand-drawn animation and maquettes of his most iconic Disney characters. We had the chance to talk to Keane about his legacy, his family, and how to inspire the next generation.

Brit + Co: You’re in the middle of three generations of working artists — your dad (creator of the legendary comic Family Circus) and your kids (daughter Claire and son Max). Are there certain things that your dad did that you, in turn, did to instill that kind of creativity with your own offspring?

Glen Keane: My dad told me early on to “draw what you know,” and I saw him do that constantly. He was always walking around with a little sketchpad in his pocket and he was always drawing things that would happen in everyday life. It was the most normal thing in the world for me. And so when I grew up and had my own little ones, I was constantly drawing them. I used my wife Linda as the inspiration for The Little Mermaid, my son Max became my inspiration for Tarzan — Tarzan is a tree surfer and Max was a skateboarder — and my daughter Claire became Rapunzel because Claire always wanted to paint the walls. And now I watch them use their own kids. So it’s not just the three generations; it’s the four. Max has a TV series that’s based on his son and his obsession with trash trucks. My daughter Claire has done children’s books based on her children. It’s the basic idea of “rip off your own family.” Use the people you know as the source of inspiration; be true and real and sincere and people will always respond to that. It has to have heart.

B+C:For Ariel, your wife was your inspiration; did you pull from other things for her character development?

GK: Ron (Clements) and John (Musker) had written the script, Jodi Benson sang this gorgeous version of “Part of Your World” that Alan (Menkin) and Howard (Ashman) had written, all of those elements come together and I had to be her. I was supposed to be Ursula and I say “be” because in animation you live in them, you are them. I told Ron and John, “I’ve gotta be Ariel.” They asked, “Can you draw a pretty girl?” “I’ve been drawing my wife for 10 years, so I think I can.” It was the most natural thing. I think I’m a lot like Ariel. I love characters that believe in the impossible. That’s who I am. My glass is always half full. I met my wife in line for a movie, we knew each other for eight days, and we got married.

GK: The Godfather, 1972. It was a fairy-tale wedding. Characters that see something that others can’t see; I love that in a character and am drawn to animate them.

B+C: You seem to have this deep connection with Ariel, and she is everywhere — on dresses and t-shirts, and people have Ariel tattoos. Does that pluck at your heartstrings when you see her out in the wild?

GK: It’s like having a child that grows up; they move on and become part of the world. You had something to do with them, but they are truly their own person. That’s how I see Ariel. I’m really thankful that God gave me the chance to work with her and be part of her in the beginning, but she is so far beyond me now.

B+C:On Tangled, you worked with your daughter on that; what was that like?

GK: Claire is Rapunzel. Rapunzel has an irrepressible spirit; you cannot contain her, the more you try: Like you lock her in a tower; her hair is going to grow so someone can climb up it. Like my daughter Claire, you cannot contain this life force. Since she was six years old, Claire wanted to paint her bedroom, the ceiling, the walls. My wife said, “We’re not going to let a six-year-old loose painting walls.” After she graduated from art school in Paris, I hired her to be Rapunzel as an artist, and I said, “Claire, now you get to paint your bedroom walls.”

Which of Glen Keane’s creations is your favorite? Tweet us @BritandCo.

Sunny Chanel
Sunny Chanel is a freelance writer as well as the founder of the whimsical site Wonder and Company. When this proud San Franciscan isn't writing, working on her fixer-upper or doing crafts, she is playing dress up with daughter and planning her next trip to Disneyland.
Creativity
Movies
Creativity Disney
More From Movies