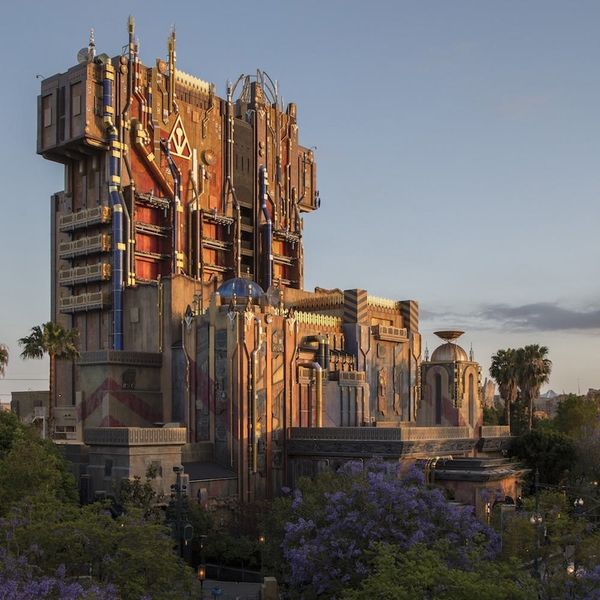 I have to say, I had mixed feelings about Disney repurposing the creepy-cool Twilight Zone-inspired Tower of Terror and Marveling it up. But after going to the Grand Opening party of Guardians of the Galaxy – Mission: Breakout at California Adventure and trying the thrilling ride (it opened permanently on May 27) — not once, but twice — I’m not mad; I’m not mad at all. Here are four reasons why the ride needs to be a part of your next Disneyland/California Adventure itinerary.

1. The ride has star power. It helped that some of the Guardians of the Galaxy stars — Michael Rooker (Yondu), Pom Klementieff (Mantis), Benicio Del Toro (The Collector), Zoe Saldana (who I had JUST seen the day before at the Pandora grand opening in Disney World), and director James Gunn — were there to celebrate the first Disney ride in the US dedicated to the Marvel universe. If the ride has the support of the film’s cast, it’s gotta be legit.

2. There’s soooooo much to see. The attraction was designed by Joe Rohde, the eclectic Imagineer who also spearheaded the Pandora project (and you’ve GOTTA check out that out-of-this-world destination). Over the course of a year, they took what was the Hollywood Hotel, gutted it, and made it the Collector’s lair (the alabaster-haired character in Guardians of the Galaxy played by del Toro). From beginning to end there are film clips to entertain you, but what I loved most were all the details — alien plant specimens, a cabinet full of exotic orbs, and a tail wagging astronaut dog named Cosmo. There are thousands of various artifacts here and there which makes waiting in line way WAY more interesting.

3. OMG… the ride. But all of the details before you get on are just foreplay. The ride itself is not (I repeat NOT) for the faint of heart. After boarding the elevator and strapping in, you are shot through various floors attempting to “break out” with the help of Rocket (the adorable albeit cantankerous raccoon). Songs from Star Lord’s “Awesome Mix Tape” are blasting, which totes brings up the adrenaline level. At points during the ride you catch so much air you feel like you’re floating. Screaming — that will happen. Make sure you strike a pose when you hit the top of the ride and the door opens to a birds-eye view of Disneyland (’cause who can resist those Disneyland ride photos).

4. There’s even more Marvel magic. This Marvel injection makes up the Summer of Heroes. There are meet and greets with Spiderman and Captain America, special food offerings (hellllooooo superhero-sized donuts), an “Avengers Training Initiative” experience for kids, and a photo op with the oh-so-chatty Groot (but yes, he only says “I am Groot”).

Yeah, Disneyland is really putting the super into the whole hero thing this summer.

Are you brave enough to ride Guardians of the Galaxy – Mission: Breakout? Tweet us @BritandCo and let us know!