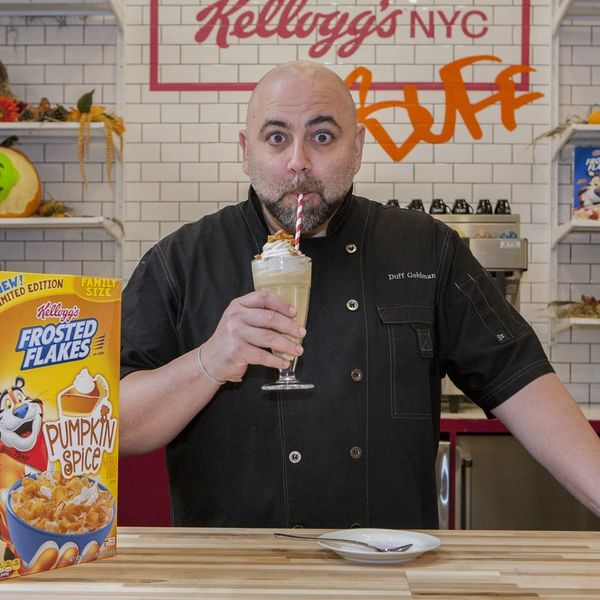 In an effort to raise money for No Kid Hungry, Kellogg’s teamed up with Food Network‘s Ace of Cakes host and chef Duff Goldman. He created a menu of fall favorites (all starring cereal) for a pop-up at the Kellogg’s NYC Café. Though you may have missed trying the food IRL, we asked Goldman to share one of the recipes, a drool-worthy mac and cheese with Kellogg’s Corn Flakes and bacon. Check it out below.

Goldman doesn’t rely on processed cheese for his homemade mac. Instead, half and half and cream cheese ensure the four-cheese sauce gets extra velvety. The cereal topping adds a crunchy contrast to send your tastebuds over the edge. “I think the Corn Flakes are a little sweeter, and mac and cheese can always use something a little bit sweet,” Goldman told us. “But also, they get really crispy, so you get a really good texture. I put bacon in there too.” Oh yeah, we forgot to mention the bacon. It adds smoky saltiness to help balance out the rich flavor of all that cheese.

Note: Do not refrigerate the pasta after cooking as the texture will change in the oven.

2. In a large skillet over medium heat, render the bacon until the fat is released and the bacon is browned. Remove from the heat, allow to cool, and crumble. You should have about half a cup of crumbled bacon.

3. In a medium saucepan, warm the half and half over medium heat.

4. Add the cheddar, Gruyere, and cream cheese, and stir until smooth. Remove from heat and stir in the cooked pasta, pepper, and bacon bits.

5. In a separate bowl, stir together the Corn Flakes, Parmesan, melted butter, and parsley.

6. Fill ramekins with the pasta mixture and sprinkle generously with the Corn Flakes mixture.

Show us your mac n’ cheese by tagging us on Instagram @BritandCo.