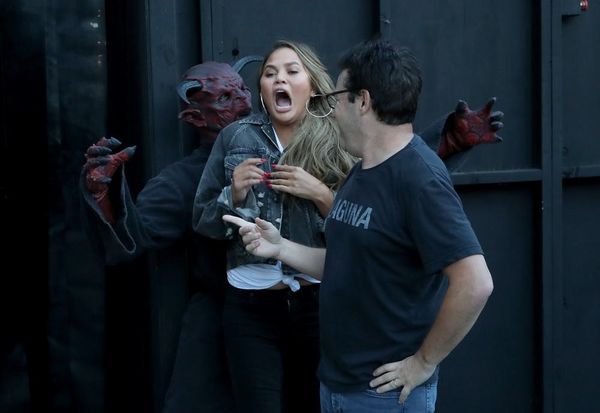 Halloween isn’t just about group costumes and spooky movies — it’s also about scaring yourself senseless, which is exactly what Chrissy Teigen and Ellen DeGeneres Show executive producer Andy Lassner did when they screamed their way through a terrifying haunted house.

Every year, DeGeneres sends the easily spooked Lassner through a maze of jump scares and screams. This year, he brought Teigen along to the Purge Maze at Universal Studios Halloween Horror Nights. Within seconds, Lassner was screaming at the first actor to try to startle the pair.

As they (nervously) made their way through each room, Lassner tried to point out some tells along the way, like how to judge which figures are fake based on their shoes. Often, he was wrong, and they ended up running for it only to encounter another gruesome scene.

Lassner tried hard to conquer his fears, claiming to be the “alpha” of the situation, but when Teigen questioned his leadership, he clarified, “I’m alpha in terms of, you follow my direction. My alpha doesn’t mean I go first!”

Teigen screamed and laughed so hard that at one point she even seemed to say that her appendix was about to burst. In the end, both got out in one piece — physically, if not emotionally. Watch the full clip below from a safe distance.

Do you like haunted houses? Let us know @BritandCo!