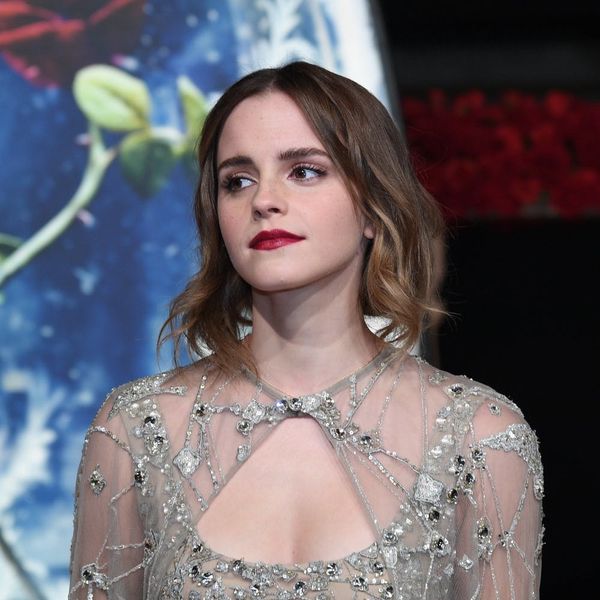 Emma Watson is fully willing to enchant us onscreen, as well as give fans plenty of behind-the-scenes peeks at her jet-set job, but there’s one area of her life that we apparently won’t be getting deets on any time soon. When it comes to who she’s dating, the popular actress would rather keep things to herself — and she has a very specific reason for never, ever talking about her boyfriend.

First, yes, Emma Watson has a boyfriend. This might be a fact that is a total surprise to some fans, which isn’t a shock. The actress is pretty private, and isn’t one to talk about him or their relationship. At all. Sitting down for a chat with Vanity Fair for a new cover story, the 26-year-old former Harry Potter star (who is currently charming the world as Beauty and the Beast’s Belle) revealed that when it comes to her personal life, “I want to be consistent.”

And how does that relate to her love life? She continued by explaining, “I can’t talk about my boyfriend in an interview and then expect people not to take paparazzi pictures of me walking around outside my home. You can’t have it both ways.”

Tonight was a special screening of @beautyandthebeast in London. The film was shown at the Odeon Leicester Square cinema to 1,600 people after a reception at the stunning Spencer House 🌹 Bespoke @emiliawickstead structural, off-the-shoulder gown with inverted pleat train. The gown is made from end-of-line fabric sourced from a family-run, London business specialising in couture fabrics, and produced in Italy. These unwanted fabric pieces have been given a new lease of life; often irregular quantities of surplus or end-of-line fabrics cannot be sold and are destroyed. This piece was created in Emilia Wickstead's London atelier, by an all-female team. Earrings are from @catbirdnyc, whose pieces are handmade in Brooklyn. Dress validated by @ecoage #ecoloves Skin prepped with @demamielskin Dewy Facial Mist, @tataharper Repairative Moisturiser and @decleoruk Aromessence Neroli Hydrating Oil Serum. De Mamiel mist is made from ingredients sourced and blended in the UK, in small batches to maintain the vitality of each natural ingredient. Tata Harper are verified by PETA that neither the brand nor its ingredient suppliers conduct, commission, or pay for any tests on animals for ingredients, formulations, or finished products. Decléor serum is a blend of naturally derived ingredients such as neroli and sandalwood and free from mineral oils and parabens. Foundation is @inikaorganic's BB Cream, which is certified organic, vegan and not tested on animals. Concealer is the @rmsbeauty "Un" Cover-Up made from organic coconut, jojoba and cacao oil and mineral colours. Cheeks are @iliabeauty A Fine Romance Multi-Stick which is gluten-free and then finished with Inika's Mineral Mattifying Powder, blended from silica, corn, tapioca and rice powders instead of talc, which face powders have traditionally been based on. Beauty brands verified by @contentbeauty

However, she admitted that when you’re a celeb, the line between your personal life and professional life can be blurred. “I’ve noticed, in Hollywood, who you’re dating gets tied up into your film promotion and becomes part of the performance and the circus. I would hate anyone that I were with to feel like they were in any way part of a show or an act.” Totally fair.

So, while we’re not likely to hear much (or anything) about Emma Watson’s fella, we can’t help but wonder who the lucky man is.

What do you think about Emma Watson’s reason for not talking about her boyfriend publicly? Let us know @BritandCo!