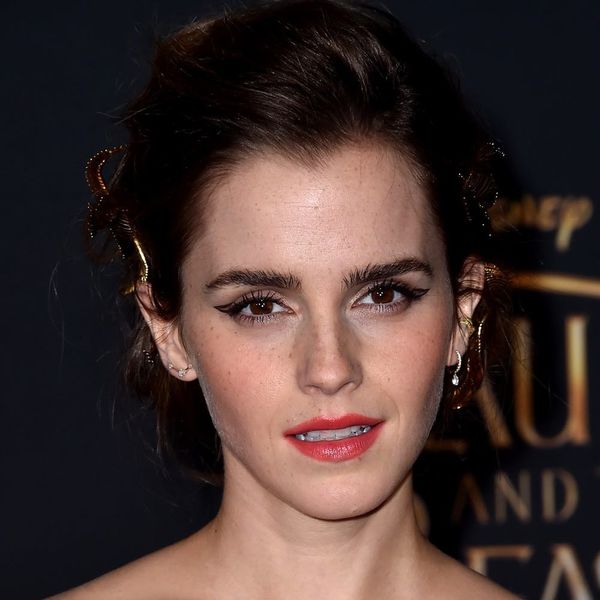 Earlier this week, Vanity Fair debuted the cover of its April issue, featuring Beauty and the Beast heroine Emma Watson. While the cover was nice enough, and the interview gave us some new insight about the actress (like why she never talks about her BF), it was a particular photo in the spread, shot by Tim Walker, that has everyone buzzing.

The photo in question features Watson in a high-collared shrug and… not much else.

Maturing from Hermione to Belle in @beautyandthebeast is a true coming-of-age story for @EmmaWatson: "I couldn't care less if I won an Oscar or not if the movie didn’t say something that I felt was important for people to hear." Read the full cover story at the link in bio. Photograph by Tim Walker.

Though she’s not showing off any more than many celebs don on a regular red carpet (see: West World star Angela Sarafyan in the “naked-est” dress of the year), people were angry with the 26-year-old’s choice to expose her breasts, claiming that the decision to show her body off was a direct contradiction of her stance as a feminist.

Emma Watson: "Feminism, feminism… gender wage gap… why oh why am I not taken seriously… feminism… oh, and here are my tits!" pic.twitter.com/gb7OvxzRH9

There’s one group in particular that’s coming for Watson for a very *different* reason, however: the Beyhive. Back in 2014, as you may or may not recall, Watson had some harsh words for Queen Bey regarding feminism. Watson was quoted as saying that she felt conflicted while viewing Beyoncé’s visual album because she felt its message to be at odds with Bey promoting herself as a feminist, as it gave viewers a “very male… voyeuristic experience of her.”

Emma Watson came for Beyoncé for having a 'sexual' album and now she's posing topless for Vanity Fair. The hypocrisy🤔

Wait. So before Emma Watson did those Vanity Fair pics she had criticized Beyonce for revealing outfits? Welp

Fans were also upset by the fact that Watson, a white woman, would criticize Beyoncé as a member of a group that has long been fighting stereotypes of hypersexuality.

Emma Watson telling Beyonce to cover up and saying she's not a feminist and then posing topless is so white feminist it's sad pic.twitter.com/OqXSLQCQt8

But Beyoncé isn’t the only woman who’s felt heat from Watson. The real life Belle was also quoted shunning women who choose to wear less-than-modest clothing back when she was 18, saying that she felt uncomfortable in a miniskirt, and that wearing revealing clothing wasn’t “sexy.” “What’s sexy about saying, ‘I’m here with my boobs out and a short skirt… have a look at everything I’ve got?'” she said at the time.

Emma Watson is a hypocrite and her feminism is so bland. I can't believe you all take her seriously. pic.twitter.com/y9FfhRQ6rb

Now, Watson herself is speaking out on the matter, and whether it’s unclear if she’s had a grown-up change of heart since uttering the aforementioned comments or otherwise, her answer to the sitch at hand is one that should make any woman cheer, if only for its basic underlying truth (not to mention the fact that one’s prior poorly worded soundbites should not make fodder for feminist-shaming).

.@EmmaWatson on the controversy over her almost topless @VanityFair cover shoot. https://t.co/9kNDAV90w6 pic.twitter.com/Bc2b5JuVHE

When asked about the VF backlash in a recent interview, Watson became visibly impassioned, saying, “I’m always just kind of quietly stunned. They were saying I couldn’t be a feminist and… have boobs.” The actress did not address her previous statements or acknowledge Beyoncé directly, but went on to express what it is that feminism means to her today, and oooo, is it good: “Feminism is about giving women choice. Feminism is not a stick with which to beat other women with. It’s about freedom. It’s about liberation. It’s about equality.” She paused before adding, “I really don’t know what my t*ts have to do with it. It’s very confusing.”

Hell. Yes! It’s a concept that should — and does — apply to ALL women (Watson AND Beyoncé included!), and we are here for it. Hopefully, it’s one Watson will gauge her words by from here on out, as well.

What do you think of Emma’s response to haters? Tell us over @BritandCo.

Nicole Briese
Nicole is the weekend editor for Brit + Co who loves bringing you all the latest buzz. When she's not busy typing away into the wee hours, you can usually find her canoodling with her fur babies, rooting around in a bookstore, or rocking out at a concert of some sort (Guns N' Roses forever!). Check out all her latest musings and past work at nicolebjean.com.
Body Positive
Celebrity News
Body Positive Controversy Feminism