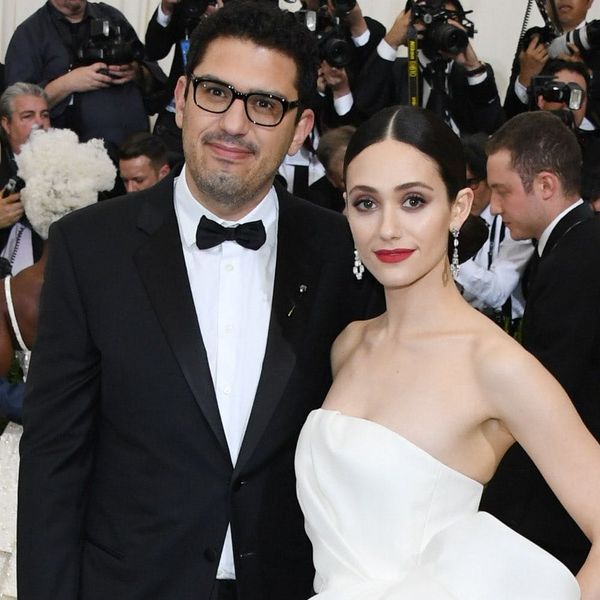 After giving fans a glimpse of her wedding back in May, and sharing photos from her unconventional honeymoon in June, Emmy Rossum is letting us see even more of her picture-perfect nuptials to Mr. Robot creator Sam Esmail. Celebrating the five years since she first met her husband, Rossum took to Instagram on September 14 to post some behind-the-scenes snaps from her fairy-tale New York wedding.

Five years ago today we met for the first time.

“Five years ago today we met for the first time,” she captioned the set of four candid black-and-white snaps.

In the first pic of the series, Rossum radiates happiness as she walks down the aisle with Esmail while friends and family clap for the newlyweds. According to People, celebs including her Shameless costar William H. Macy and Mr. Robot’s Rami Malek were in attendance for the “I dos.”

In her series of snaps, Rossum is seen taking a swig out of a Champagne bottle in the backseat of a limo. There’s also a photo of the couple sharing a secret whisper underneath the chuppah (a traditional Jewish wedding canopy), and a beautiful pic of Rossum lying with her head in Esmail’s lap (probably toward the end of the night at their Guggenheim reception).

As for her incredible wedding dress, she told Vogue that she worked closely with designer Carolina Herrera to create something classic that she could wear the whole night through.

“I knew I’d be getting married at the temple, which is quite grand, and that the reception would be at the Guggenheim, so we knew that it needed to be a dress that could hold up to that,” she told the mag after the wedding. “And it was Mrs. Herrera’s idea to make it quite modern and fresh, and kind of use the shape of the Guggenheim on the bodice.”

What are your favorite pics from your own wedding? Share them with us @BritandCo!

Kat Armstrong
Kat has been a writer, social media maven and mom for longer than she's willing to admit. She's also spent time in front of and behind the camera, interviewing celebs, politicians and acting as a producer for fashion and artistic photography shoots. When she isn't writing for various orgs and publications, she's hanging with her kids, husband and French Bulldog, Peter, in Toronto, Canada.
Celebrity Couples
Celebrity News
Celebrity Couples Celebrity Wedding
More From Celebrity News