Oscars or Olympics? We’ve Got 23 Golden Sippers That Celebrate Both! 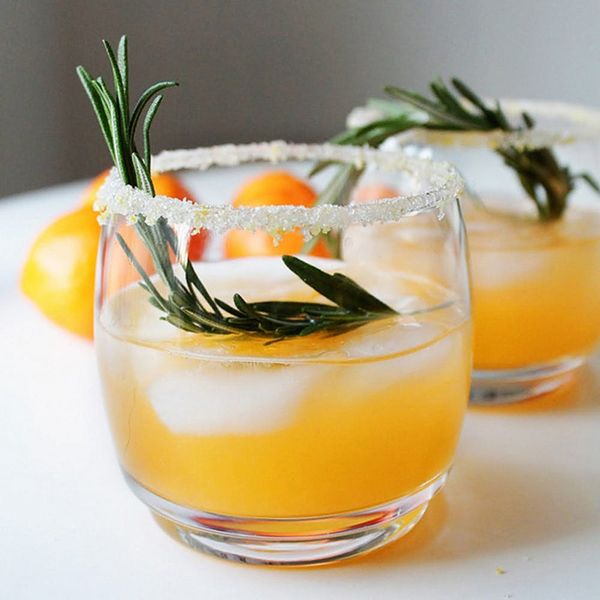 Why gold drinks you ask? Do we really have to spell it out? Firstly, we’ve got a bunch of gold-medal TV watching to do concerning the Sochi Olympics. Secondly… hello? Oscars! No matter what sort of winner you’re toasting, a Midas-touched tipple is the appropriate answer. We’ve done some gold digging of our own, and now we’re coming back to you with our favorite ways to stay golden.

1. Ginger Prosecco: Impressive and so easy to make, this cocktail is a combo of prosecco and ginger beer. And that foam? It’s cotton candy covered in edible gold stars, and it’s stellar. (via Style Me Pretty)

2. Crisp Bourbon Apple Splash: Nothing like a little bourbon to warm you up after watching a spine-tingling bobsled run. (via Valley + Co. Lifestyle)

3. Lemonberry Martini: Sometimes all it takes is a single solitary stir stick. (via A Beautiful Mess)

4. Glitter Rim: Please click through and look at the photos of this UNICORN THEMED fantasy party…. oh, and the cocktail is golden. That too. (via Kelli Murray)

5. The Shucks Deluxe: Did the superstar you were rooting for fall short? Aww shucks. Drink up. Everything will be peachy keen in minute. (via Verses from My Kitchen)

6. Fennel and Orange: In case you haven’t noticed, it’s winter. This gilded gulp takes note and makes use of not one but two seasonal ingredients. (via Bird + Cleaver)

7. White Cosmos: It’s snowy white enough for the Olympics and chic enough for the Oscars, and seeing as it’s a cosmo, you can have a Sex and The City rewatching party post other viewing party. (via Le Blougue)

9. Citrus Herb Vodka Tonic: We had to work a nod to Russia’s potato potable in here somewhere. (via Bakers Royale)

10. Pink Champagne: Rose-colored glasses with sparkly rims. Clearly you can see, this one is a winner. (via Style Me Pretty)

11. Golden Raspberry Lillet: Red raspberries are fine and dandy, but there’s something about the gold variety that feels a little more exotic and elegant. (via Quitokeeto)

12. Winter Sun: This appropriately named vodka drink gets big props for using some winter greenery. It’s your new go to when hibernating next to the boob tube. (via Two Tarts)

13. Champagne: If you’re keeping the vibe old Hollywood, keep things simple with champagne sans anything else. (via Ann Street Studio)

14. Fish House Punch: This classy communal cocktail goes by a curious name. And if by chance you really do end up taking it into the icehouse, we might consider breaking out a reel and joining you. (via The Kitchn)

15. Golden Girl: Edible glitter tops off a simple grapefruit-juice-and-prosecco combo. This one is just dying to be invited to your Oscar par-tay. (via A Beautiful Mess)

17. Mango Slushie: Spiked with rum, this baby has us thinking it’s about time to watch Cool Runnings again. (via Gourmet Traveller)

18. Edible Stars: Whether you’re paying tribute to star athletes or movie stars, these brightly shining cocktail companions will get you there. (via Wedding Chicks)

19. Ginger Lemongrass Spitzer: DDs in the room need an option at this epic viewing party. Treat them nice with this zippy little number. (via Playful Cooking)

20. Cranberry Cubes: In case you and your pals are casual sippers, you’re going to need a solution to keep the bubbly cold. Frozen cranberries get the job done with a splash of red-carpet-inspired color. (via Waiting on Martha)

21. French 75: It’s an oldy, but a goody and perfect for toasting any winner who you think has staying power. (via Taste Book)

22. Autumn Ash: If sweet sippers make you recoil in disgust, raise your glass to this savory selection. (via Daydreamer Desserts)

23. The 24-Carat Champagne Cocktail: Oh, and remember last year when we created a cocktail specifically for the Oscars? It’s still winning this year. (via Brit + Co.)

Think these cocktails are as gold as gold? Let us know in the comments below!

Lex Monson
Alexis is the co-founder of Punkpost, the app that lets you send handwritten cards (yes, handwritten by a real human) in the amount of time it takes you to send a text message. The exclusive card collections are created by a community of artists and designers and hand letter pressed on high-quality cotton paper. Get the full experience by downloading the app from the iTunes Store.
Gold
Cocktails
Gold Olympics Oscars
The Conversation
More From Cocktails