Everything You Need to Know About 2018 International Women’s Day 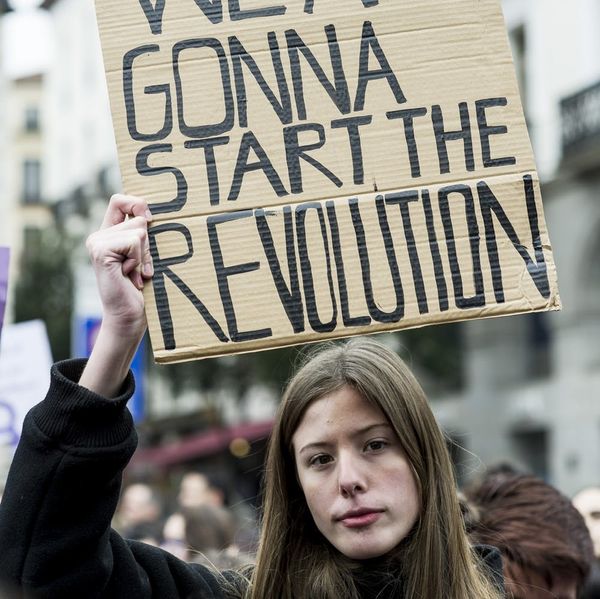 Last year’s strike, called by an international group of feminists and dubbed A Day Without A Woman by the Women’s March, prompted women all over the world to take a day away from their jobs and domestic duties. Some women participated in street demonstrations and other political activities, while others simply took the day off. This year, multiple organizations including the United States branch of the International Women’s Strike and a number of chapters of the Democratic Socialists of America have called for work stoppages and are holding rallies.

Ariel Zakarison, a member of the organizing committee for the Labor Branch of the NYC chapter of the Democratic Socialists of America, tells Brit + Co that the DSA is organizing and supporting International Women’s Day events because the organization is “very concerned with workers rights. Women have not typically enjoyed the same labor rights as men have, and much of our labor is not recognized and is unpaid, so we’re demanding recognition of that work.”

For anyone hoping to participate in the 2018 International Women’s Day activities, here are the essentials you need to know.

What is International women’s day all about?

Women’s strikes have been held in the past, and now seem to be a recurring annual tradition. Last year, the Women’s March’s campaign for A Day Without A Woman encouraged women who could to take the day off from work and participate in political actions in their communities. Last year, Women’s March Inc. called for a strike, and it looks as though this year they’re not necessarily participating in a strike, but are calling for some actions related to getting the vote out this year.

The Women’s March didn’t respond to Brit + Co’s request for comment, but their Twitter account posted on March 3 asking for people to wear red, commit to voting, a post a photo under the hashtag #WomenPowerToThePolls.

Organizations in some cities are hosting strike events, but on a smaller scale than last year. For example, NYC DSA is hosting a work strike and rally from 4:30-8pm local time in Washington Square Park.

Last year there were several calls for a full day’s strike, but not everyone can take a full day away from work. Zakarison says that this year the DSA focused on a short work stoppage to make the event more accessible.

Cisgender men can certainly participate in and support the strike, but the day is all about women, trans men, and gender non-binary and gender non-conforming people. The Women’s March suggested last year that cis men who want to be a part of International Women’s Day activism should consider taking a primarily supportive role, such as taking on additional unpaid, domestic work the day of the strike, and discussing pay parity in the workplace.

where are events taking place?

The strike is international! Organizations in most big cities in the US are likely holding events in support of the strike, and many suburbs and smaller towns will have actions as well. To find out what’s happening near you, check out the International Women’s Strike-USA events page. If no events are listed for your city on the International Women’s Strike website, try searching around on Facebook and Twitter for your city and “women’s strike 2018.”

Will you be participating in International Women’s Day activities? Tell us about it on Twitter @BritandCo.

Elizabeth King
Elizabeth King is a politics, history, and culture writer based in the Twin Cities. She is generally pretty cranky but still enjoys traveling, music from the early 2000's, and plotting the resistance. Feel free to say hi on Twitter at @ekingc or check out some of her work at www.elizabethcking.com.
Feminism
Gender Issues
Feminism International Womens Day
More From Gender Issues