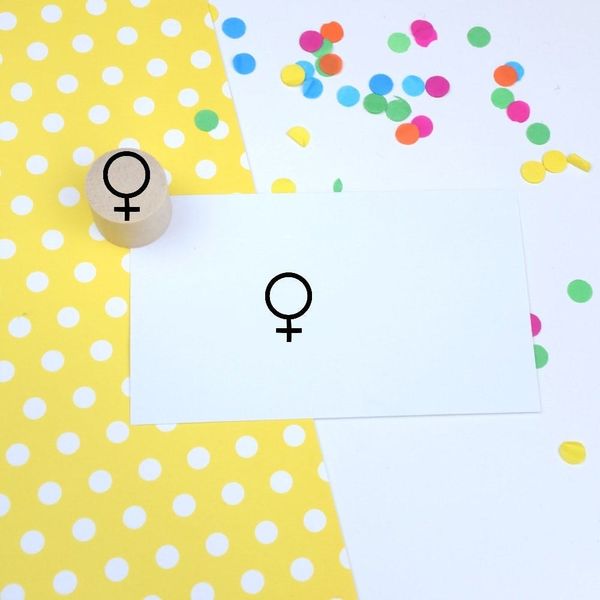 Following the Women’s Marches (organized by these 14 badass babes), we’ve all been feeling inspired to really put our words into action. Luckily, the march’s organizers have some definite plans for how we can do that, beginning with their 10-step plan for President Trump’s first 100 days in office.

The very first step in that plan is super simple — they’ve asked that supporters write postcards to their local senators about the issues they most care about, explaining why it matters to them. Then, prior to sending, simply snap a pic of their postcard and upload it to social media, along with the #WhyIMarch. Easy peasy, right? We thought too. In fact, we thought it was such a great idea we’ve rounded up all the inspo you need to have your very own Postcard Party with your squad.

First things first: You’ll need some postcards. The Women’s March is offering downloadable versions free of charge, ensuring there’s no excuse not to make your voice heard. (via Women’s March)

2. Yourorgangrindr Small Uterus Stamp ($29): Not everything has to be spelled out! Stamps, like this small uterus version, speak volumes on their own. DIY your own postcards and get to decorating!

4. BetiBySarita Women’s March Iron On ($9): These handmade iron-on prints are meant for shirts and totes (which you can totally make for your guests prior to their arrival), but we don’t see any reason why they couldn’t be used as graphics for your cards, as well.

5. LittleWomanGoods Feminist Vinyl Sticker ($3): Use these stickers for a little added flair or make a statement with a large single sticker, like this “Future Is Female” version.

6. The Hayley Cakes Ovaries Before Brovaries Cookies ($48): We also love this 12-pack of adorable cookies with their simple reminder to always have our girls’ backs. Sorry, bros. Ovaries before broveries. Always.

Wash your sweets down with the beverages of your choice in these inspiring DIY Beyoncé lyrics glasses. You can prep ’em ahead of time with a Cricut machine and a little transfer tape. (via Bespoke Bride)

8. Beyoncé “Who Run the World” Single ($1): Speaking of Bey, should your party hit a spirit snag (fat chance!), you can fire everyone back up with a rousing rendition of “Who Run the World?” by the Queen herself.

9. Cutfingers Feminist Art Print ($12) It certainly wouldn’t hurt to have a little inspo hanging on the wall. Case in point: this rad digital art print.

11. Eythink Male Tears Pencils ($5/pack): You MUST have feminist pens and pencils to get your ladies ready to write about the real issues.

For the more crafty among you, these cross-stitch postcards will add a nice flair. They’re totally customizable based on your issues of concern (we think we’ll go with a female symbol for ours!) and have a far more invested feel. (via The Crafty Swedes Pyseselbolaget)

13. Pilot FriXion Erasable Markers ($22): These erasable markers will allow you to play around with wording and design. Mess up? NBD — just erase it!

When your guests start to work up an appetite (which we’re sure they will!), you’ll be totally ready with these Nasty Woman cupcakes. (via Probably This)

Lola Kirke did at the Women’s March.

Send your finished postcard in style with these super cute scrapbook paper pocket envelopes. Like the cross-stitch cards, you can totally make ‘em your own, using girl power pinks, Dem party blues or any other color you so choose. (via Gathering Beauty)

Seal your postcard with love by making your very own (and mighty official-looking) wax-heart seal. (via Ice Pandora).

19. Alisa Michele Nasty Woman Arrow Hand Stamped Necklace ($36-42): When your guests are ready to leave, send them home with some parting gifts. This Alisa Michele necklace, available in 14K gold-fill or sterling silver, will help them stay nasty all year long.

20. Brat Life Pro Choice Pins ($7 for four-pack): If your party’s picking up steam and you can’t afford to fund necklaces for each girl, there’s no shame in going smaller scale with an empowering pin. Plus, this four-pack is less than $10!

21. EdgeofPrint Women’s Rights Pin ($10): And these ones just speak the truth.

Nicole Briese
Nicole is the weekend editor for Brit + Co who loves bringing you all the latest buzz. When she's not busy typing away into the wee hours, you can usually find her canoodling with her fur babies, rooting around in a bookstore, or rocking out at a concert of some sort (Guns N' Roses forever!). Check out all her latest musings and past work at nicolebjean.com.
DIY
Current Events
DIY Feminism Party Ideas womens march
More From Current Events