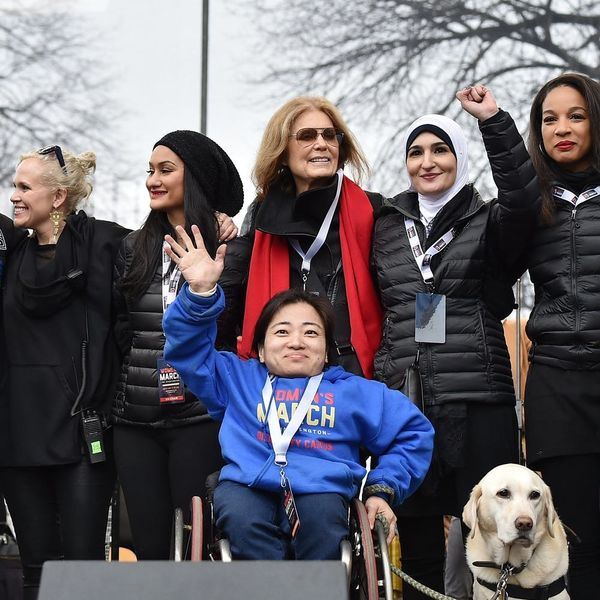 Yesterday’s marches were nothing short of amazing for so many, many reasons, and while it was undoubtedly made special by all the many, many civilians that participated, you have to stop to wonder, at some point, how it came to be: How did anyone ever manage to get all that passion, all that talent, all that female power together in such collective force?

Because while it seemed to run seamlessly (miraculously, not one arrest was made in DC), SOMEONE had to organize it. Indeed, the 14 ladies profiled below are just a few of the faces we all have to thank for yesterday’s greatness. Together, these ladies managed to throw an event that boasted an attendance of roughly 3 million worldwide in two months. Two months! Take a moment to let that sink in. The biggest inaugural event in history was organized in less time than it takes most people to plan a wedding. Meet several of their key members below.

Why do YOU march? @ttc2046 marches for justice and equality. #WhyIMarch #WomensMarch

1. Ting Ting Cheng, Legal Director: A New York public defender with a background in human rights, Ting Ting champions for women’s equality on the daily, making the march a natural extension of her overall being.

2. Tabitha St. Bernard, Youth Initiative Coordinator: A fashion designer for Tabii Just, “zero waste clothing made in USA,” and a mother of one, Tabitha said she’s “just a regular mom marching for her family.” While we’d beg to differ about that whole “regular” bit, we got her drift when she said, “This march is not just for activists. This march is for everyday women like me who love America and want to see it succeed.” Hear, hear! (Photo via Michael Stewart/Getty)

3. Janaye Ingram, Head of Logistics: Full of both beauty and brains, Janaye is perhaps best known as a former Miss USA pageant contestant, but she’s far, far more than just a pretty face: After receiving a BA in psychology, she headed to DC to take on a role as the DC Bureau Chief of Reverend Al Sharpton’s National Action Network, where she served through 2015. Dang, girl! (Photo via Marcus Ingram/Getty)

4. Paola Mendoza, Artistic Director: A Colombian-born filmmaker (you may have seen her documentary Z for Zendaya about Zendaya), author and activist, Paola has won awards for her film, Entre Nos, about her mom’s struggle as a single, immigrant parent of two. Needless to say, she’s kinnnnd of a diehard for immigrant rights and, clearly, women’s too — she acted as the march’s artistic director. She’s now hard at work on her second feature film, A Paso de Mangles. (Photo via Vivien Killilea/Getty)

5. Cassady Fendlay, Head of Communications: As the communications lead, we can only assume that it was Cassady’s job to get the word about the march out, and boy, did she ever! Having worked with Linda Sarsour (see below) on prior marches, like the March 2 Justice back in April, she certainly had the know-how: Though much smaller in size (100 marchers over 250 miles), the march was still considered to be wildly successful. (Photo via @CassadyF)

6. Linda Sarsour, National Co-Chair: As the executive director of the Arab American Association of New York and the co-found of MPOWER Change, the first online-organizing Muslim platform, this isn’t Linda’s first rodeo: Girl has not only organized humans rights events like the 250-mile “March 2 Justice” that occurred last April, but she’s received numerous awards and honors for her efforts. Did we mention she’s also the mom of three? *Bowing down* (Photo via Theo Wargo/Getty)

7. Bob Bland, National Co-Chair: With a baby slug across her chest, Bob Bland was one of yesterday’s more memorable speakers, as she admitted to the crowd that she’d never done anything like that before. Prior to acting as the organization’s national co-chair, Bob was doing just fine operating as the founder/CEO of Manufacture New York and a fashion designer for her own brand, Brooklyn Royalty. She became one of the march’s key organizers and founders after a Facebook post about an idea for a positive resistance movement led to yesterday’s events, making her living proof that you don’t have to be a political vet to make a difference.

8. Nantasha Williams, Logistics: Nantasha has served as the Executive Director of the New York State Black, Puerto Rican, Hispanic and Asian Legislative Caucus (try saying THAT three times fast!), so she’s well-versed in both diversity and inclusion: Key points made at yesterday’s marches. Oh. And did we mention she has also run for office?

9. Breanne Butler, Global Co-Coordinator: Breanne’s day job differs wildly from that of many of the other women — she’s a NYC chef, as well as the CEO of candy jewelry company by Breanne — but it seemed to translate to the world of activism just fine: As the campaign’s site quips, “She has been able to use her experience in organizing kitchens to help organize almost 600 marches around the world.” (Photo via Monica Schipper/Getty)

10. Ginny Suss, Producer: A video producer that has worked for The Roots and also serving as the VP and video content producer for OkayPlayer and OkayAfrica, Ginny has the visual thing down. Given the stunning photo visuals that we saw from yesterday, we can only imagine the video footage she managed to nab! (Photo via Johnny Nunez/Getty)

11. Sarah Sophie Flicker, Strategic Advisor: What ISN’T Sarah Sophie is perhaps a better question. Her credits include that of a performer (that’s Sarah with her leg in the air), writer, aerialist, mom, activist, director, dancer…the list goes on and on. (Photo via Patrick McMullen/Getty)

12. Tamika Mallory, National Co-Chair: This social justice champ worked with the Obama Administration to create programs such as the NYC Crisis Management System for gun prevention. She now heads up her own #GirlBoss company in Mallory Consulting. (Photo via Noam Galai/Getty)

13. Carmen Perez, National Co-Chair: Carmen is another activism vet, serving as the executive director of The Gathering for Justice. She’s also responsible for co-founding The Justice League task-force branches of NYC and CA, all of which work to stop child incarceration and racial inequality in the judicial system. She was called to action after the death of her 19-year-old sister spurred her to help other youths when she was just 17 years old, making her one of the group’s more senior activist members. (Photo via Theo Wargo/Getty)

14. Vanessa Wruble, Head of Campaign Operations: As an avid traveler, the co-founder of Okayafrica with Questlove of The Roots and the Women’s campaign’s operations manager, it was Vanessa who recognized the need for a more inclusive and diverse movement. According to a recent article with Vogue, she told Bob and Teresa Shook (both white) that they “needed to make sure this led or centered around women of color, or it will be a bunch of white women marching on Washington…that’s not okay right now, especially after 53 percent of white women who voted, voted for Trump.” (Photo via Patrick McMullen/Getty)

Are you inspired by these awesome ladies? Share with us @BritandCo.

Nicole Briese
Nicole is the weekend editor for Brit + Co who loves bringing you all the latest buzz. When she's not busy typing away into the wee hours, you can usually find her canoodling with her fur babies, rooting around in a bookstore, or rocking out at a concert of some sort (Guns N' Roses forever!). Check out all her latest musings and past work at nicolebjean.com.
Charity
Current Events
Charity Politics womens march
More From Current Events