Fairy Magic Decor Is Here to Keep You Cozy This Winter 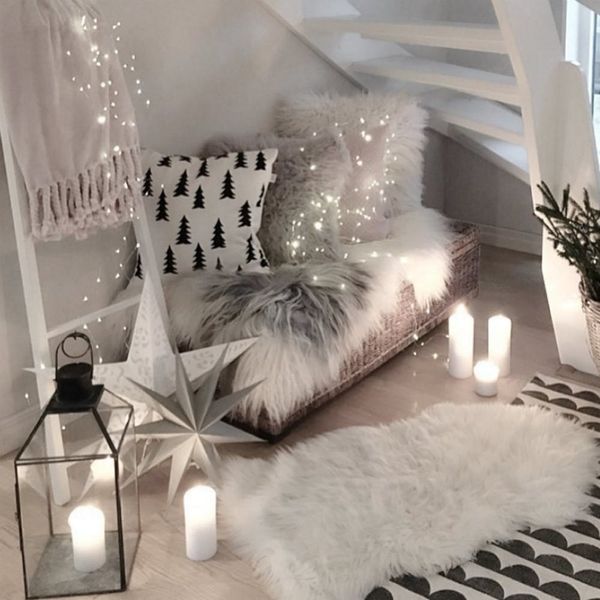 Now that January has set in and most of us have taken down our Christmas decor, we’re feeling the winter blahs. While some people can expertly design their living space using nothing more than IKEA basics, some of us need a little more inspiration than that. Thanks to an interior designer in Sweden, we’re getting major fairy woodland inspiration that brings a bit of Christmas through the new year, and it’s essentially the most perfect look for a cozy winter wonderland indoors.

Instagrammer @mykindoflike has a dreamy, super cozy aesthetic running through her snaps. Shades of white and pink accents with rustic touches give her home a sense of whimsy and warmth. In order to keep the Christmas feeling alive, she’s decided to start taking her Christmas lights (known as “Fairy Lights” throughout Europe) and delicately tossing them throughout her home to give each room its own magical, darling look.

We find these little tiny lights to be so inviting in every room that they’re placed in. While some of the looks are definitely not practical (how can you even sit on a couch covered in lights???), the look is one that we could totally see ourselves doing for a small dinner party or girls’ night in. And in a kid’s room? Well she’s got you covered there too!

Can you even imagine that this woman has two kids and her house looks like this? Scandinavian fairy decor is something we definitely love and will be incorporating into our homes immediately. We’re just left wondering how she keeps everything so fresh and white with kids around?

Would you toss some fairy lights around your home for a woodland look? Share the look @BritandCo!

Kat Armstrong
Kat has been a writer, social media maven and mom for longer than she's willing to admit. She's also spent time in front of and behind the camera, interviewing celebs, politicians and acting as a producer for fashion and artistic photography shoots. When she isn't writing for various orgs and publications, she's hanging with her kids, husband and French Bulldog, Peter, in Toronto, Canada.
Home Decor
Home Decor Inspo
Home Decor