See This Awesome Kayak Fold Into a Portable Bag! 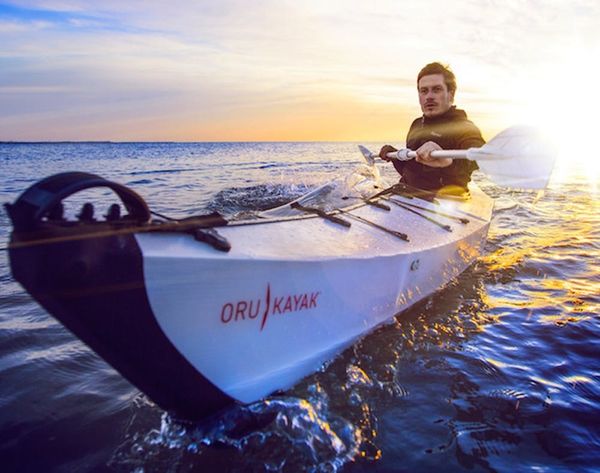 If you have a small apartment, then you know everything there is to know about using space creatively. Well, almost everything. You’ve probably invested in a space-saving dining table, have switched to a wall-mounted desk and have discovered that, if you’re resourceful enough, even the smallest studio apartment has room for a bicycle. Now try finding space for a kayak. Impossible, right? That’s because you don’t have an Oru Kayak.

Featured on Shark Tank, this origami-inspired, fully-functional kayak folds into a 33 x 29-inch carrying case in a matter of minutes and weighs only 26 pounds. Once folded, there is even room for a collapsible four-piece paddle and a life jacket in the bag. Crazy! It’s the perfect solution for outdoor-loving apartment dwellers without any storage space to spare. It’s even small enough to keep in your trunk (if you’re a city dweller with a car), because, well, you never know where the day might take you. And if you’re a world traveler that likes to be prepared at all times for all activities, Oru can be checked as luggage on the plane as well.

Still wondering how an origami kayak that folds into a suitcase could possibly keep you afloat? The secret sauce is the kayak’s highly durable, double-layered polypropylene skin that makes it able to withstand even icy water, and is designed to last for 20,000 folds before it starts to weaken. The kayak’s seam creates a firm, waterproof seal that rests above the waterline for added safety.

Anton Willis, the ORU Kayak founder, came up with his idea after moving to San Francisco and discovering he no longer had space for his kayak. Initially, the project was launched on Kickstarter in 2012, where it quickly raised over $400,000. Today you can snag yourself one of these for $1,195. Seems like a steal when you consider that it’s a fully functional boat that fits in a bag… pretty impressive!

Would you use Oru Kayak? What other things do you wish you could fold into a bag and carry with you? Share your thoughts with us in the comments below.

Nicole Hyman
A closet foodie, trend-spotting geek and writer, Nicole can be found at the intersection of tech and daily life. When not on the lookout for the latest tech to make life that much easier, she equips entrepreneurs with the skills they need to survive in the digital world. Offline she has been known to indulge in homemade gnocchi.
Small Spaces
Home News
Small Spaces