These Roses Are the Gorgeous New Take on the Unicorn Trend 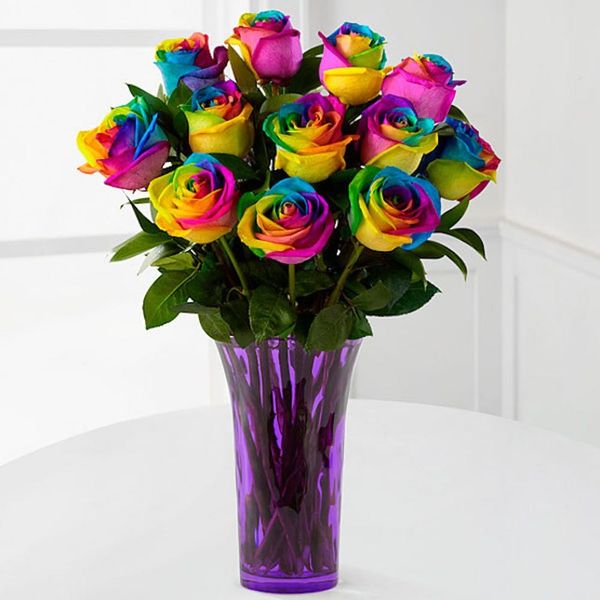 Ah, unicorns. The trend that never seems to die. First it was beauty, with nails and makeup and hair. Then it was shoes. Then Starbucks hopped on it and it quickly became every barista's nightmare. It still isn't over though, friends. It seems like rainbows and unicorns are here to stay at least a little longer, because now flower companies are jumping on the bandwagon — even if they don't say so outright.

FTD Companies, Inc., a floral and gifts company, now offers bouquets of rainbow roses. They say the flowers were inspired by kaleidoscopes (no unicorns mentioned here), but the timing certainly seems convenient.

The bouquets aren't limited to the full rainbow, either. Other color combos include pink and purple; blue and white; red, white, and blue; blue, green, and purple; purple and yellow and more.

Oh, and in case unicorn roses aren't your thing, perhaps you'd be more inclined to unicorn tulips? Have we hit peak unicorn trend yet?

What do you think of all this rainbow/unicorn stuff? Tell us @BritandCo!

Shea Lignitz
Shea can be found in the nearest bookstore or brewery, exploring the great outdoors, or blasting Led Zeppelin. She grew up in the cold and rain of Northern California's redwoods but is currently wandering around Texas.
Flowers
Garden
Flowers
More From Garden

How to Repot Your Plants Without Killing Them

7 Blooms You Can Plant Now to Bring on Spring