By Age 6, Girls Are Less Likely Than Boys to Think They’re Smart Enough 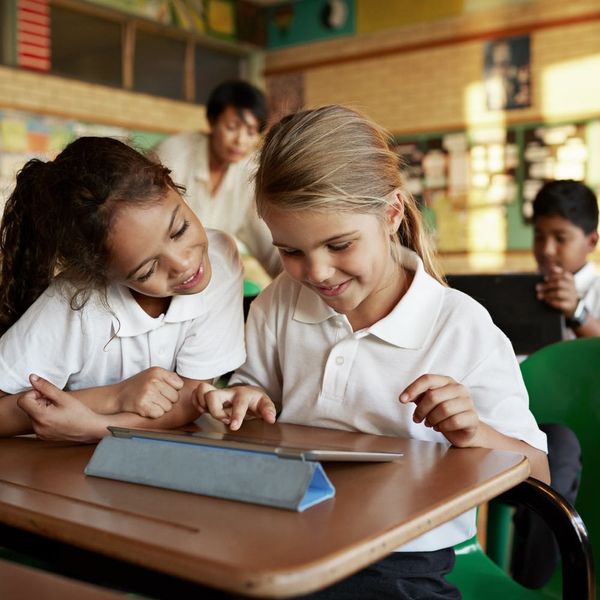 Go, girl! You totally know that you’re just as smart as any man. But here’s the thing — your daughter may not see things the same way. A new study says that girls as young as six years old don’t see women and men as intellectual equals. Even though we’ve come a long way, going from barefoot and pregnant to bringing home the bacon (and frying it up in a pan!), the next generation may still be hanging on to old-school stereotypes.

The study, published in the journal Science, found that girls tend to rate boys (or men) as more intelligent than girls (or women). But, when it comes to academic achievement, the results weren’t exactly the same. Girls actually see themselves as having the top grades — over boys’ scores. So it seems that girls don’t necessarily associate smarts with school performance.

The researchers didn’t only look to see whether girls see themselves as smarter than boys. They also tested whether gender-centered beliefs shaped interests. Researchers gave 64 kiddos, ages six and seven years old, an introduction to two games. The group, half boys and half girls, were told that one game was for, “children who are really, really smart.” The other game was for “children who try really, really hard.”

When it came to the game for “really, really smart” kids, the girls just weren’t as interested as the boys. But for the other game (the one for kids who try hard), the girls were as interested. Based on the researchers’ conclusions, it would seem that gendered beliefs about intelligence somehow inform children’s decisions on activities. Girls tend to see activities that require brains as a no-go, or, at the very least, not as appealing.

Ah, one year can change a lot of things. In this study, age changed the way that girls saw women’s intelligence. Ninety-six children between the ages of five and seven were told a story about a non-gendered person who was, “really, really smart.” The kids were then asked to pick who the person in the story was from one of four pictures — two photos of men and two of women.

The five-year-old girls associated intelligence with their own gender just as much as the same-aged boys did. But when the six-year-old children were asked to pick the “really, really smart” person, the girls tended to choose the men as the smarter sex.

What does this research mean for mamas (and dads too!)? Well, possibly that we all need to be a bit more cognizant of what our kiddos are picking up on. While the research doesn’t offer a super-cool science-y solution, it does raise a red flag. When children as young as six are deciding that men are the intelligent sex, something isn’t right. And this can go on to impact their future educational and professional decisions.

Before your little one falls into this type of stereotyped thinking, hold up females as equal. Start with yourself: Be the role model that your mini me needs. Go ahead and brag about your brainy accomplishments. There’s no shame in showing your child just how awesomely intelligent her mama is. Add on intelligence-related accomplishments that other women make too. Read books, watch movies (Hidden Figures for a start), and make extra, extra, extra sure to let your daughter know just how smart she really is!

From Your Site Articles
Erica Loop
Erica Loop is a freelance writer living in Pittsburgh. When she's not busy creating kids' activities for her blog Mini Monets and Mommies, you can find her trying to hang out with her teenage son, being chased by her two Olde Boston Bulldogs or teaching a children's karate class (she's a third degree black belt!).
Parenting
Parenting
Parenting
More From Parenting