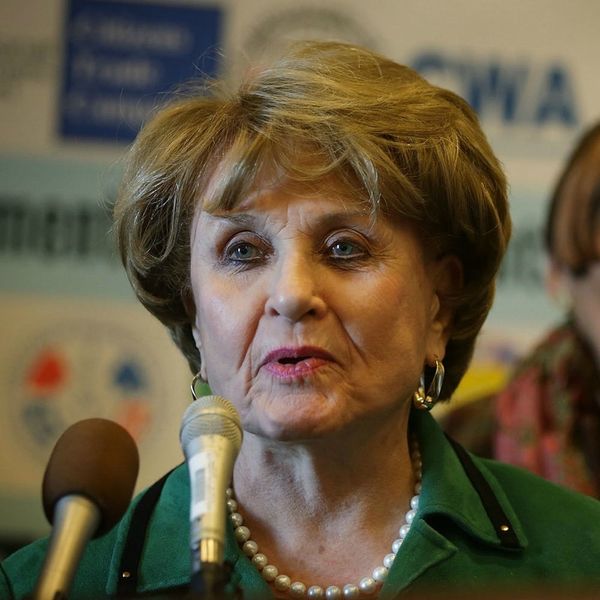 New York State Democratic Congresswoman, 88-year-old Louise Slaughter, passed away one week after falling in her home in upstate New York. Slaughter was serving her 16th term in Congress and paved the way for women on both sides of the aisle to join the ranks due to her glass ceiling-smashing career.

Slaughter was born in Kentucky, holding onto her Southern accent even after her family relocated to New York when she was in her early 20s. A microbiologist by training, Slaughter first joined Congress in 1986 after more than a decade in state politics, both in her home of Monroe County and the state legislature.

Nearly everything Slaughter touched in her career became legacy making. She was the first female chair of the House Rules Committee, and was dedicated to women’s rights — she was a founding member of the Congressional Pro-Choice Caucus.

She also co-authored the Violence Against Women Act, which was signed into law in 1994 as the first detailed law to address domestic violence and sexual assault against women, including the first federal criminal law against battering.

The Democrat was also a tireless defender of military personnel, and in 2009, she worked to recall and replace 16,000 pieces of outdated body armor from the front lines. “Her effort led to improved armor testing protocols and ended the practice of outsourcing testing to private companies,” her office said in a statement.

Slaughter’s congressional work helped push through the Affordable Care Act in 2010 (Obamacare), and her tireless work to get the law passed actually ended with the congresswoman receiving death threats. She also championed legislation that protects people from losing health insurance on account of genetic conditions, and was critical of international free trade agreements — in 1994, she broke from Democratic party ranks by voting against NAFTA, which she argued hurt US manufacturing.

“Louise was a trailblazer,” Slaughter’s longtime friend and confidant Nancy Pelosi said in a statement on Friday. “Her strong example inspired countless young women to know their power, and seek their rightful place at the head of the decision-making table. She took great pride in representing the area around the historic Seneca Falls Convention, and embraced the future with her forceful engagement on social media.”

Slaughter was survived by her three daughters, grandchildren, and one great-grandchild.

How has Slaughter’s career inspired you? Tell us on Twitter @BritandCo.