8 Things to Look Forward to at the 2019 Grammys 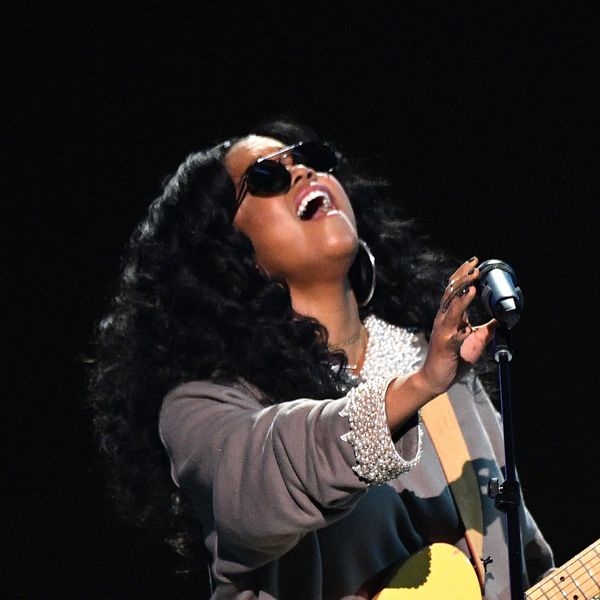 The 2019 Grammy Awards will take place on Sunday, February 10, 2019, and this year, music's biggest night has a chance to do things right. In the shadow of (and in response to) last year's male-centric telecast, the Recording Academy made some major changes behind the scenes, resulting in what many hope will be a more diverse and inclusive representation of what's actually happening in music today. Besides that, it's always a spectacle when music's biggest and best names get together in one room, and there will no doubt be many memorable moments throughout the night. Here are some of the things we're looking forward to at the 2019 Grammys. (Photos via Emma McIntyre/Getty Images for iHeartMedia + Dia Dipasupil/Getty Images for BET + Jaclyn Martinez/Courtesy of AK Worldwide, Inc + Timothy Kuratek/CBS)

No more #GrammysSoMale. Following 2018's #GrammysSoMale debacle, the Recording Academy introduced 900 new voting members. The results were pretty immediate: When the 2019 nominations were announced, female artists like Brandi Carlile and Cardi B dominated several of the top categories. Last year, Lorde was the only woman nominated for Album of the Year — and the only nominee not asked to perform. Compare that with this year, when five of the eight Album of the Year nominees are women. (Photo via Timothy Kuratek/CBS)

The beginning of a new era of inclusivity. This year, the Grammys expanded the number of nominees in its top categories — Album, Record, and Song of the Year, as well as Best New Artist — from five to eight, allowing not only more gender diversity but also an expanded array of genres and an opportunity for newer artists to compete. R&B newcomer H.E.R., AKA Gabi Wilson, for instance, nabbed nominations for both Best New Artist and Album of the Year, bringing her rising star to a much broader, more mainstream audience. (Photo via Dia Dipasupil/Getty Images for BET)

Alicia Keys. The 15-time Grammy winner will take the stage as host for the evening, making her the first female host since Queen Latifah in 2005. The singer isn't shy about speaking her mind — and has already made a point to shout-out all the women nominated for trophies this year — so she's sure to help make it a memorable evening. (Photo via Jaclyn Martinez/Courtesy of AK Worldwide, Inc)

Exciting newcomers. Between the names on the nominees list and the confirmed performers so far, it's clear that the Recording Academy is giving some shine to many relative newcomers. Along with 21-year-old Album of the Year nominee H.E.R., Latin music crossover sensation Bad Bunny is nominated with Cardi B and J. Balvin for his verse on "I Like It," and fan favorites Shawn Mendes and Camila Cabello will be making their solo Grammys debuts. (Photo via Emma McIntyre/Getty Images for iHeartMedia)

The possibility of historic wins for Cardi B. and Taylor Swift. Taylor Swift has just one nomination to her name this year (Best Pop Album for Reputation), but if she wins, she'll become the 11th most-awarded solo woman in Grammys history, tied with gospel singer Shirley Caesar — a major feat not just overall, but especially for her young age. Meanwhile, Cardi B. could become the first solo female rapper to win the Best Rap Album award for her debut album Invasion of Privacy. The only other woman to win in the category was Lauryn Hill, with The Fugees, for 1997's The Score. (Photo via Kevin Winter/Getty Images)

Inspiring speeches. Between the evening's presenters and grateful artists stepping to the podium after a win, there are sure to be some memorable moments at the mic. Last year, Janelle Monae gave a moving speech on the #TimesUp movement as she introduced Kesha's performance. We're looking forward to some similarly empowering statements this year. (Photo via Kevin Winter/Getty Images for NARAS)

The performances. It's all about the music, after all, and the Grammys are aiming to make 2019's telecast "the best three-and-a-half hours of live musical entertainment we can." Not only are this year's performers among some of the freshest artists making waves today, but living legend Diana Ross will do a special 75th Diamond Diana birthday performance, and there will no doubt be some surprise crossover collaborations to watch for, too. One such moment that has already been announced is between Post Malone and the Red Hot Chili Peppers. Prepare for many Twitter hot takes. (Photo via JC Olivera/Getty Images for Universal Music Group)

More empowering moments from women. Despite the lack of women winning trophies in 2018, almost every time a woman was on stage was a moment to remember, from Kesha's powerful performance of "Praying" to Camila Cabello's impassioned plea of protection for DREAMers. We're looking forward to more of that — and a little hardware to boot — in 2019. (Photo via Kevin Winter/Getty Images for NARAS)