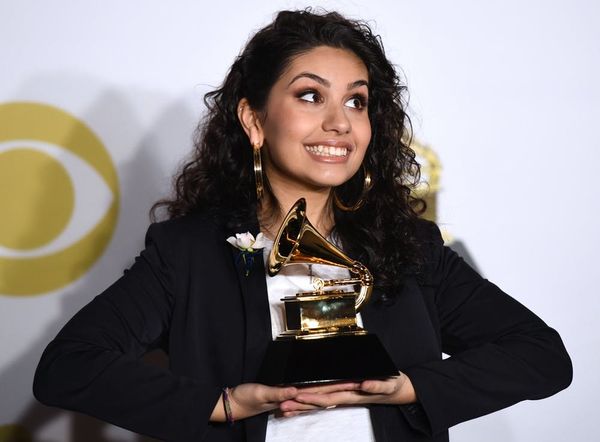 In November 2017, when the nominations for the 60th annual Grammy Awards were announced, it seemed as though the music awards institution might be getting a much-needed modern makeover. One of the night’s biggest awards, Album of the Year, was more diverse than usual for the category, with no white men nominated for the first time in two decades.

And women seemed to be getting their due, too: R&B sensation SZA nabbed an impressive five nominations, while Kesha, following a monumental comeback after years of legal battles with Dr. Luke, earned her first-ever nominations for Rainbow. Four out of the five Best Pop Solo nominees were women. And after a lot of visibility at the 2018 Golden Globes, the #TimesUp movement planned a red carpet presence at the Grammys, too.

But then the big night came along, and women were once again relegated to the background. During the nearly four-hour broadcast, only one solo female artist, Alessia Cara, took the stage to accept an award during the main ceremony. In fact, female musicians won just 11 of the 84 total awards, despite several categories featuring mostly women. Case in point? The Grammy for Best Pop Solo went to Ed Sheeran, the only male nominee.

Perhaps most notably, Lorde was both the only woman in the Album of the Year category and the only one of her fellow nominees who was not asked to do a solo performance.

The backlash was quick and fierce. Within hours of the broadcast, the show had earned itself the unfortunate hashtag #GrammysSoMale. Viewers felt, rightfully so, that the awards seemed happy to use a post-Harvey Weinstein era of female empowerment to pay lip service to a cultural trend without actually making any course corrections. And Recording Academy president Neil Portnow exacerbated the problem when he not only failed to see his his show’s shortcomings, but told Variety that women simply needed to “step up” in the industry more.

In response, some viewers (as well as artists like Iggy Azalea) suggested boycotting the awards in 2019. A few days later, Lorde took out a full-page newspaper ad, which didn’t directly make mention of her exclusion but thanked fans for “believing in female musicians.” Many immediately called for Portnow to resign.

But he didn’t. And while the Grammys — like any major awards show — are never immune to criticism over who gets nominated for and wins awards, 2018’s fever-pitch fiasco won’t soon be forgotten. How can the Recording Academy recover? And are they even concerned with righting their #GrammysSoMale wrongs?

A few days following the show, Portnow issued a statement lamenting his “poor choice of words,” and announced that the Recording Academy would be establishing an independent group to review practices going forward. One month later, it was announced that Tina Tchen, co-founder of Time’s Up, former chief of staff for Michelle Obama, and executive director of White House Council on Women and Girls, would lead the Grammys’ new Diversity and Inclusion Task Force. Universal Music exec Michele Anthony, singer/songwriter Sheryl Crow, and 13 other high-powered industry folks — men and women — were also named as members.

Then, in October 2018, just three months before the 2019 Grammys, Tchen announced that 900 new voting members had been added to the Recording Academy. Voting members participate in voting for nominees and final winners, and must be musical creatives themselves.

The most notable aspect of this group of new members — and the best sign that the Grammys are taking their need for a more inclusive and diverse representation of current music seriously — is that all 900 new voters are female, and/or people of color, and/or under the age of 39.

Tchen called the pointed change “a first step,” telling Billboard that the voting process will be revisited in the future, but that she “wanted to do [it] right away to affect this year’s awards.”

The success of the task force’s efforts has yet to be determined, but there’s reason to feel hopeful. Despite the blatant disregard for balance, the 2018 Grammy Awards featured some truly amazing female-powered highlights. Janelle Monae used her limited stage time to deliver a passionate and timely speech about the Time’s Up movement. And Kesha sang her comeback ballad “Praying,” along with a supporting crew of pop-music heavyweights like Camila Cabello, Julia Michaels, and more, for one of the most affecting awards show performances in recent memory.

Whether Portnow and the Academy felt those moments were anything more than a necessary quota-filler, music fans saw them as solid proof of something they already knew: that women don’t need to step up so much as the outdated powers-that-be need to step down or, at the very least, pay a little more attention.