This Is How to Embrace the Vinyl Record Comeback 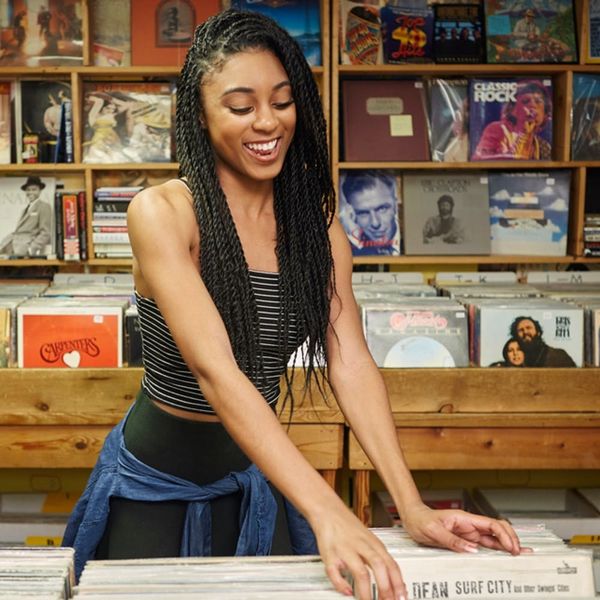 Vinyl records were once thought to be going the way of the wooly mammoth, but today, they’re far from extinct. The vinyl record is as hip and hot as ever. And I should know. I recently inherited my father’s vinyl-only record store in San Francisco — Grooves on Market Street, if you’d like to swing by! Since diving headfirst into this hip, new side hustle, I’ve had more than a few friends and acquaintances ask about how to get into (or back into) the vinyl game. To help them — and you — here are a few of the basics.

The format, which took a nose dive after the birth of the CD and music downloads, has been growing steadily over the last several years. This year, it’s on track to become a billion-dollar industry, the biggest year it’s had in decades. Vinyl sales even outdid music downloads last year, according to the Entertainment Retailers Association. Crazy, right?

Those of us who are vinyl aficionados already know that there’s a depth of sound, a sonic quality that you can’t get from a CD or download. Your ears might not recognize the differences right away, but your soul will. There’s also something so wonderful about holding a record in your hands, admiring its 12-inch cover featuring notes, credits, song titles, and artwork that’s often worthy of framing. And as modern advertising tells us, a record collection just looks cool.

1. Get a cool turntable. As with anything, you can spend a little or you can spend a lot. You can also choose between style and something more utilitarian. Regardless, a working record player is crucial. For starting out, you can pick up a super cute turntable, like the units at Urban Outfitters, which range from girly (think pink and floral) to wonderfully retro and cost $100-200. If, and when, you’re ready to upgrade and invest in a serious turntable, you can pick up a fancy-schmancy clear Acrylic Thorens ($4,799) or a sleek and stylish Shinola turntable ($2,500). (Photo via Urban Outfitters)

2. Collect the old. Records from the last 60 years are relatively easy to come by — you just need to know where to look. One of your first stops should be your local record store. After you’ve hit all the local hot spots, cast your net even farther to score great finds and deals. On the weekends, hit up garage sales and flea markets. And don’t forget your local thrift stores! Although you’re most likely to find Barry Manilow, Barbra Streisand, or Mitch Miller records, you may end up scoring a few gems by the Stones, Dylan, or even the Buzzcocks. For those must-own records, search eBay or the music collector’s go-to site Discogs. If you get *really* serious about vinyl collecting, then you’ll want to frequent record swaps, which are often hosted by local college radio stations. When purchasing used records, you need to pay special attention to the condition. Look at the vinyl for any big scratches, large scuffs, or warping — these issues will make for noisy listening (and you definitely don’t want that).

3. Collect the new. It’s amazing to see where new vinyl records are sold these days. They’re back on the shelves at big box stores like Target and Walmart, and you can even buy them at various Whole Foods (in cities like New York City, Los Angeles, and Dallas). The demand for new vinyl is so huge that vinyl pressing plants have months-long waiting lists. Jack White’s label, Third Man Records, is even opening up its own vinyl record plant, featuring the first record presses made in 35 years. If you’re up for a surprise, sign up for a subscription box like Vynl — for $39 a month, you’ll receive three new records each month.

So now’s the time to go old school with your music listening and enjoy sweet tunes in a tried-and-true way. Vinyl may have been on a break for the last 30 years, but it’s back and bigger than ever.

Do you already have a turntable? Tweet us @BritandCo and let us know!

Sunny Chanel
Sunny Chanel is a freelance writer as well as the founder of the whimsical site Wonder and Company. When this proud San Franciscan isn't writing, working on her fixer-upper or doing crafts, she is playing dress up with daughter and planning her next trip to Disneyland.
Music
Home News
Music
More From Home News