How to Wear the Latest Hair Accessory Trend — Hair Charms! 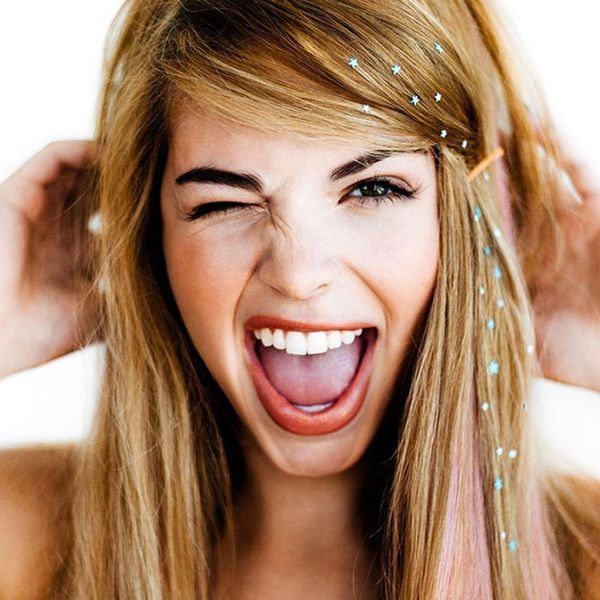 Move over, floral crowns, there’s a new hair adornment on the rise – and it’s coming at you with a whole lot of sparkle power. They’re called hair charms, and they’re all kinds of awesome. While the name might initially sound more like something you’d wear to complement your braces, these little gems can actually be worn in a whole bunch of grown-up ways.

First, let’s answer the question that’s probably at the front of your mind: how do they work? You can put down the glue, because attaching these charms to your hair is a lot easier than that. All you have to do is peel off the backing, stick the charms to your hair and press a flat iron or curling iron to them for four seconds. Then, peel off the plastic and you’re good to go. They’ll stick for a few days, or you can easily remove them with a little conditioner and oil.

If you feel like you’ve seen them before, that’s probably because they’ve been on the rise for awhile. Hayden Panettiere spearheaded the trend back in 2013 when she rocked hair charms on the red carpet. More recently, you may have seen them attached to Helena Bonham Carter’s locks as the Fairy Godmother in Disney’s new live-action version of Cinderella.

The charms are also now popping up at some of the big fast fashion retailers. Nasty Gal has a set with gold stars, Urban Outfitters has some that are just screaming Coachella and Forever 21 has both a set of rose gold hearts as well as an iridescent mix. If you’re looking for a whole bunch of variety, we recommend heading over to Charmsies, which has over 30 different options.

We’re envisioning these little specks of sparkle nestled into a bridal updo, tucked into braids at a music festival or maybe lined down a single strand for a night out on the town. Or hey, if one day you feel like sporting sparkly hair to the office, do your thing, girl.