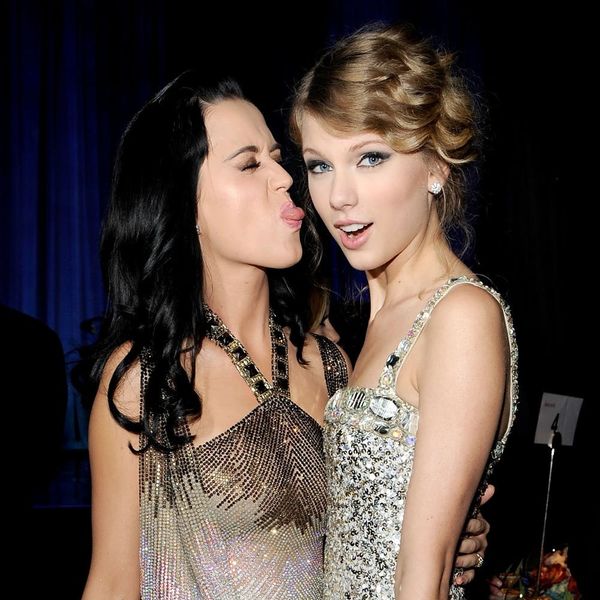 It’s been a weekend for Katy Perry. While live streaming her entire weekend, the singer went on an emotional roller coaster, talking about everything from her identity struggles to her cultural appropriation. When the weekend turned to her on-again feud with Taylor Swift, the singer made an apology of sorts to her former BFF.

While Swift has yet to comment, it’s time we took a trip down memory lane to see how the two mega stars have gone from squad to squabbles, in case there could be any kind of reconciliation.

2008-2009: The earliest days of Perry and Swift’s friendship saw the two meeting and hanging out at post-awards shows parties. As time went on, they released new music and fawned over each other publicly on Twitter. It was during these early days that Perry was still married to now-ex husband Russell Brand. (Photo via Larry Busacca/Getty)

November 2009-February 2010: During Perry and Swift’s budding friendship, Swift briefly dates fellow musician John Mayer. The couple split in February 2010, and Swift eventually goes on to write music about her former (much older) boyfriend by way of her hit, “Dear John.”

April 2010: With their friendship firmly cemented, the pair took to the stage together during Swift’s tour to perform Perry’s hit “Hot ‘n’ Cold.” What better way to profess your undying friend-love by covering one of their most popular songs?

OH MY GOSH. Is this kitty for real?!?! RT @taylorswift13: Hanging out with my new roommate, Meredith. http://t.co/T6toq5bk

I want to cuddle that kitten so hard! Miss u :) K.I.T! RT @taylorswift13: @katyperry YES! And currently chasing her own tail. PS I miss you!

November 2011: The pair send adoring tweets back and forth after Swift announces the arrival of her new cat, Meredith Grey. Both singers consider themselves to be “cat ladies,” and the friends gushing over a new kitten is wholesome.

July 2012: Perry’s husband, Russell Brand, tells her he is divorcing her via text message (which we see in all its heartbreaking glory during her docu-concert movie, All of Me. Brand admitted to Billboard Magazine that their short (less than two-year) marriage ended, in large part due to their conflicting schedules. (Photo via Larry Busacca/Getty)

August 2012: Scandal! Swift’s former boyfriend Mayer and BFF Perry start dating, although Swift seems okay with it, as the couple were spotted at the 2013 Grammy Awards and Swift and Perry had a friendly hello. (Photo via Christopher Polk/Getty)

September 20123:TMZ reports that the singers have have had a falling out due to Perry stealing three of Swift’s tour dancers after the dancers gave Swift 30 days notice in the middle of her tour.

October 2014: This is when it all falls apart. The release of Swift’s multi-platinum album 1989 sees hit single “Bad Blood” climb the charts. With lyrics like, “You know it used to be mad love/So take a look what you’ve done/’Cause baby, now we’ve got bad blood,” had everyone wondering who the song was about. In an interview with Rolling Stone Magazine, Swift said, “For years, I was never sure if we were friends or not. She would come up to me at awards shows and say something and walk away, and I would think, ‘Are we friends, or did she just give me the harshest insult of my life?'”

In response, Perry subtweeted, simply saying, “Look out for a Regina George in sheep’s clothing.” Even fans noticed that Swift was putting Perry on blast in the liner book for the album.

Taylor Swift would put a picture of a Grammy next to the lyrics of Bad Blood (basically a Katy Perry diss), lmfao pic.twitter.com/e9yKwUWGcZ

Summer 2015: Nicki Minaj adds fuel to the fire. After tweeting that it seems as if MTV will only nominate “slim women” for awards, Swift responded by saying, “It’s not like you to pit women against women, maybe one of the men took your spot.” Not to be outdone, Perry chimed in on the social platform, saying, “Finding it ironic to parade the pit women against other women argument about as one unmeasurably capitalizes on the take down of a woman…” (Photo via Larry Busacca/Getty)

May 2017: After a few random cutting tweets and comments regarding Swift, including Perry’s insistence that she’d consider working with the singer if she apologized to Perry, Perry releases the Taylor Swift diss track, “Swish Swish,” and although she claims it’s not about anyone in particular, to most people, it’s pretty clear that the song is about Swift. Perry even (sort of) admitted it on Carpool Karaoke.

June 2017: In a stroke of pure genius, it appears that Swift has gotten the last word (for now). When Perry released her new album, “Witness,” on June 9, that very same day Swift casually re-added her entire back catalog to streaming services after she’d pulled it three years prior. Shady.

Time will tell if the pair will ever truly get over their seemingly petty disagreements, but one thing’s for sure: In the nine years since the two first met, they’ve given us a lot of entertainment.

Have you ever had a major friend fallout? Tell us how it ended @BritandCo!

Kat Armstrong
Kat has been a writer, social media maven and mom for longer than she's willing to admit. She's also spent time in front of and behind the camera, interviewing celebs, politicians and acting as a producer for fashion and artistic photography shoots. When she isn't writing for various orgs and publications, she's hanging with her kids, husband and French Bulldog, Peter, in Toronto, Canada.
Katy Perry
Pop Culture
Katy Perry Taylor Swift
More From Pop Culture