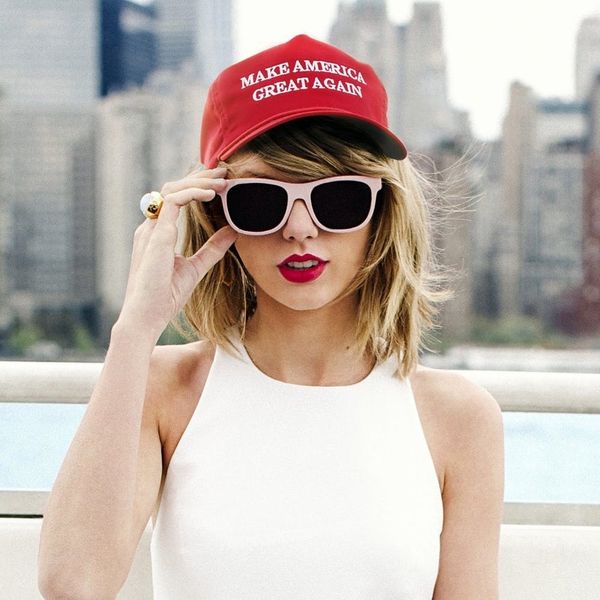 Taylor Swift proudly showed the world that she voted, along with plenty of other celebs when it came time to cast our ballots. And while votes are kept confidential (unless we decide to let people in on our political leanings), more than a few stars chose to share who they were opting for, even endorsing their chosen candidate (Katy Perry, Kendall Jenner, Demi Lovato and Will Ferrell are just a few examples). One celeb who didn’t do so was Taylor Swift, though some folks seem to think she voted for Trump. Here’s why.

While many fans wanted to know who Taylor was voting for (like, A LOT of fans)…

America really wants to know who @taylorswift13 is voting for pic.twitter.com/dW6CyFmJyD

Others called for the super popular star to use her influence and publicly endorse a candidate. However, Tay refused to do so. But that hasn’t stopped some folks from thinking that she actually did. And beyond that, they believe she endorsed Trump.

Why? Because of this…

So are the news stories that circulated during and after the election like lifeeventweb.com’s “Taylor Swift SHOCKS Music Industry: ‘I Voted for Trump’.” FAKE.

The fact is, we don’t know who she voted for. No one knows except for Taylor. And that’s totally her right.

Does a celeb’s political beliefs change how you feel about them? Tweet us @BritandCo!

Desiree O
Desirée O is a ‘Professional Bohemian’ who loves anything and everything related to the arts, entertainment, and pop culture. She ADORES being a ‘Newsy’ for Brit + Co, covering all of the latest tidbits of awesomeness that you want to read about. When she’s not writing, she’s either making messy art, going on long adventurous walks with her camera, or poking around over at bohemianizm (http://www.bohemianizm.com/). You can find out about Desirée O and her work at http://DesireeO.com/ or follow her on Twitter @DesireeO.
Politics
Politics
Politics Taylor Swift