Who 15 Surprising Celebrities on the Campaign Trail Are Supporting 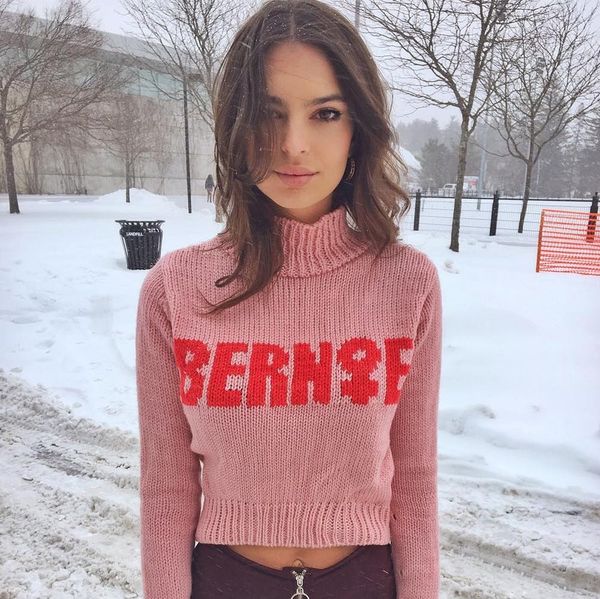 If the pages of US Weekly and People have taught us anything, it’s that stars are just like us. They eat food, wear clothing (knit to de-stress!) and, sometimes, have opinions on politics. This is an especially polarizing election year, with ideas on both the far left and right gaining more public attention and support than they have in a long, long time. In this hyper-charged political climate, it makes sense that any public figure who has thoughts about the election wants to do what they can to spread the message they support. With that in mind, here are some of the hottest celebrity endorsements candidates are racking up. Whether you want to judge the candidate by the celebs they’ve attracted or the celeb by the candidate they support, we gotchu!

Kendall announced her pick via an Instagram photo supporting Hillary Clinton, with a caption including Hillary’s campaign slogan: “Shirt by @themarcjacobs. History by @hillaryclinton. #MadeForHistory #ImWithHer @voguemagazine.” Most, if not all, of the Kardashians have publicly endorsed Hillary. Kim and Kanye went as far as posting a selfie with her! (Photo via @kendalljenner)

Likewise, Demi posted a pic of herself chillin’ with the former Secretary of State and possible first woman president (!). She was on the campaign trail in Iowa supporting Hillary, who eked out a win against Bernie Sanders at the Iowa caucuses on February 1. (Photo via @ddlovato)

Lena and soccer superstar Abby Wambach posted this photo of themselves at a Clinton campaign event to Hillary’s Instagram account. Lena even took over the account in New Hampshire earlier this year as part of her efforts to drive support to her preferred candidate. (Photo via @hillaryclinton)

Supermodel and actress Emily Ratajkowski also braved the early February New Hampshire weather to campaign, but she was showing love for the man of many memes, Bernie Sanders. She even got a cute custom sweater to broadcast her candidate of choice! Now that’s commitment. (Photo via @emrata)

One of the most vocal celebrities in this campaign, for any politician, has been Killer Mike of Run the Jewels (pictured left), who’s thrown his wholehearted support behind Bernie Sanders. Killer Mike is a frequent presence on the campaign trail and is doing his best to improve Bernie’s support among black Americans, a group that tends to support Hillary Clinton in higher numbers. (Photo via Joshua Lott/Getty)

You might recognize her as Adam’s… earthy sister in the last couple seasons of Girls, Ali on Transparent or as one of the four best friends in the 1995 coming-of-age film Now and Then. (Okay, maybe that’s a bit obscure; great movie, though!) Gaby Hoffmann is an under-the-radar kind of actress, but she hasn’t been hiding her political affiliation. She showed up in Nevada to encourage voters to support Sanders in the state’s primary last month, though he ended up losing to Hillary Clinton. (Photo via Ethan Miller/Getty Images)

7. Donnie Wahlberg: Donnie, formerly known as a member of the New Kids on the Block and more recently as Mark Wahlberg’s older brother, is reinventing himself again, this time as a Marco Rubio supporter. As the picture above captured, Donnie was in Nevada campaigning for his chosen Republican candidate last month. (Photo via Ethan Miller/Getty Images)

Jenna, the adult film star, supported Mitt Romney in 2012 and followed that up with a ringing endorsement of Marco Rubio this year, going as far as to call him the “clear choice.” (Photo via Ian Gavan/Getty Images)

He’s the frontman for Lynyrd Skynyrd, which you might remember from your dad’s record collection. Johnny may not be blasting his support for Marco Rubio on social media, because he doesn’t appear to have his own Twitter account, but he has contributed to the senator’s presidential campaign. (Photo via Stephen Lovekin/Getty Images)

Veteran actor James Woods is a loud and proud conservative, so it’s no surprise he chose to endorse a Republican for president. Back in October he took to Twitter to proclaim his support for Ted Cruz, with whom he claimed to have shared a 40-minute phone conversation about how much they each love America. (Photo via Slaven Vlasic/Getty Images)

11. Glenn Beck: Former Fox News commentator Glenn Beck is one of the biggest names to have thrown his weight behind Ted Cruz. Here’s Beck addressing a Ted Cruz rally in front of a dark, but gigantic, American flag. (Photo via J Pat Carter/Getty Images)

You might know him as the father of Girls star Zosia Mamet (there’s that show again), or as a well-regarded playwright and screenwriter. Either way, you might not have known David is a conservative, but he was spotted at an LA fundraising event for Ted Cruz back in December. (Photo via Stephen Lovekin/Getty Images)

13. Sarah Palin: He’s racked up a who’s who of conservative celebrity endorsements, but former vice presidential candidate Sarah Palin definitely takes the cake. Here she is campaigning for Donald in Iowa. (Photo via Joshua Lott/Getty Images)

Reality TV and controversial social media persona Tila Tequila has made a few startling announcements this year (she, along with rapper BoB, has questioned the earth’s roundness), so perhaps it’s not surprising that she threw her support behind the most outrageous political candidate most of us have ever seen. Tila even put together a video about her support for Donald Trump, which she says is because she admires his commitment to “restoring our government to its ideals while adapting to political modernity.” (Photo via Ian Gavan/Getty Images)

Country-rapper Kid Rock is another celebrity who endorsed Mitt Romney in 2012 and is doubling down on his right-wing politics this time around. He told Rolling Stone earlier this year that he’s “digging Trump,” in part because he thinks the country should be run as a business and by a business man. “And,” he added, “his campaign has been entertaining as sh*t.” Hard to argue with that. (Photo via Jamie McCarthy/Getty Images)
Tannara Yelland
Tannara is a freelance writer and editor, an occupation perfectly suited for her affection for drinking too much coffee and keeping odd hours. She usually writes about politics, economics, and pop culture. Some day she will put to use the hundreds of hours she's spent watching Say Yes to the Dress and write THE definitive analysis of the show.
Politics
Politics
Politics
More From Politics